TOUCHED BY LYME: 10 years of Lyme progress, one blog at a time 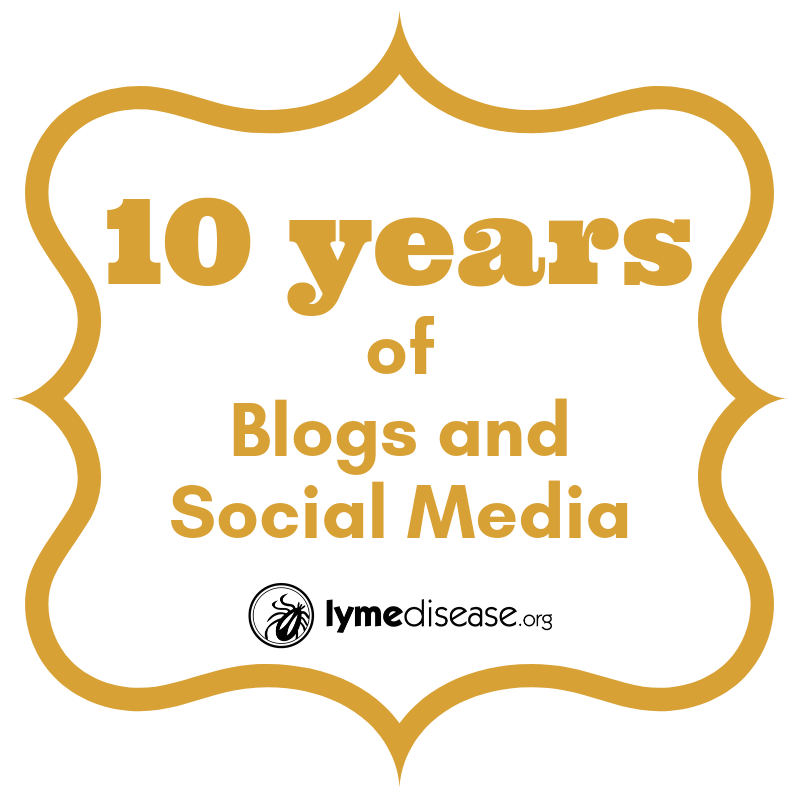 It’s hard to believe that just a decade ago, the online Lyme world looked very different from today. Facebook and Twitter were in their infancy. (At that time, there wasn’t even a “like” button on Facebook!)

Instagram and Pinterest hadn’t been invented. There was no community of Lyme patients on any social media platform. There were online Lyme support groups, but they were designed for privacy, not for sharing content widely.

The general news media rarely mentioned Lyme disease. And when they did, they typically echoed the IDSA/CDC viewpoint, with no room for alternate voices.

But no single online destination existed where a person could find breaking news about Lyme disease. Nowhere to learn about pending legislation, political developments, new research and treatments, book reviews, patient experiences and the like.

Such a news hub was sorely needed.

There was at this time a fairly new idea floating around the internet—something called a “blog.”

And a new-ish website called the Huffington Post made a name for itself by pulling together blogs from many different sources on a variety of topics. Which got us thinking….

What if we created our own online destination for Lyme-related news and offered our own blogs? Privately, we described this as “the Lyme version of the Huffington Post.” It seemed like an idea whose time had come.

Thus, in January 2009, we launched LymeDisease.org’s blogs. And I’m proud to say, they are still going strong.

Over the last decade, we’ve posted more than 2100 separate items. All with the goal of informing and empowering Lyme patients and their advocates.

Some content we draw from other sources. So, if a newspaper, TV or radio station offers noteworthy coverage of Lyme disease, we’ll point you to it. For example:

You can watch award-winning “Lyme and Reason” TV show here.

Transmitted in the womb: When kids battle Lyme from birth

Our news blogs have covered Lyme-related state and federal legislation, celebrities sharing their Lyme experiences (such as Avril Lavigne and Yolanda Hadid), the spread of ticks and the rise of Lyme cases throughout the US (and indeed, the world.)

But we don’t just alert you to coverage from other sources. We also generate content ourselves. Our blogs are circulated widely and are sometimes quoted in newspapers, magazines or other websites–becoming part of the national conversation about Lyme disease.

Our CEO, Lorraine Johnson, writes the LYME POLICY WONK. Over the years, she has offered cogent analysis of such important topics as the IDSA Lyme disease guidelines, Monica Embers’ groundbreaking Lyme research at Tulane University, the creation and progress of the MyLymeData project, and the federal Tick-Borne Disease Working Group.

I write TOUCHED BY LYME, seeking to emphasize how Lyme affects individual patients and their families. Sometimes I profile a person, or discuss treatment options, or explain (and decry!) activities of the CDC or other health officials.

Sometimes I review books. In the earliest days of my blog, there were hardly any books about Lyme disease to review. That’s changed substantially over the past 10 years! Here are a few I’ve written about:

Gone in a Heartbeat: A Physician’s Search for True Healing, by Neil Spector, MD.

Morgellons: The Legitimization of a Disease, by Dr. Ginger Savely

Why Can’t I get Better? Solving the Mystery of Lyme and Chronic Disease by Dr. Richard Horowitz

Our Focus section includes guest bloggers from a wide variety of viewpoints. Examples include:

An anthropologist’s view of Lyme disease and suicide, by Aaron J. Jackson

As our blogs enter their second decade, this month we are launching a new one called MyLymeData Viz. This is also written by Lorraine Johnson, in her role as principal investigator of the MyLymeData research project.

About six months after we launched the blogs in 2009, we also joined Facebook and Twitter, which have since developed strong followings in the Lyme community. As new platforms became available, we also joined LinkedIn, Pinterest and Instagram.

The rise of Facebook, Twitter and other social media has also made it easier for Lyme patients and their advocates to connect with each other and make things happen.

One example: two years ago, the Lyme community wanted to protest the naming of Gary Wormser to the federal Tick-Borne Disease Working Group, due to his flagrant financial conflicts of interest. Time was short.

LymeDisease.org started an online petition that drew more than 10,000 signatures within a couple of days. (At which point, Wormser “declined the invitation” to participate in the panel.)

Ten years ago, we wouldn’t have been able to pull that off in such a short time. As it was, our blogs, social media channels and email newsletters provided the infrastructure to help make that happen.

The last decade has seen changes in the medical aspects of Lyme disease, too. Progress has been made in some quarters, including greater recognition of the spread of tick-borne diseases and the many ways they can manifest.

There have also been advances in diagnosis and, to some extent, in treatment. More doctors have taken ILADS training, though there are still not nearly as many Lyme-literate medical professionals as we need.

Unfortunately, much greater change is required. Tick-borne diseases continue to affect ever-larger numbers of people and too many of them can’t access proper medical care.

We need better prevention strategies, so people don’t get infected in the first place. We need prompt diagnosis for those who do get sick, so they can be treated before their acute cases become chronic.

And we need better treatments for people with chronic Lyme, so they can overcome the illness and regain their health.

Facing and overcoming these challenges requires many things–including a well-informed community. Keeping the information pipeline open and running well has been our blogs’ goal for the last 10 years. And we plan to continue it in the future.

Stay abreast of our blogs by subscribing to our weekly email newsletters. Click here to sign up.