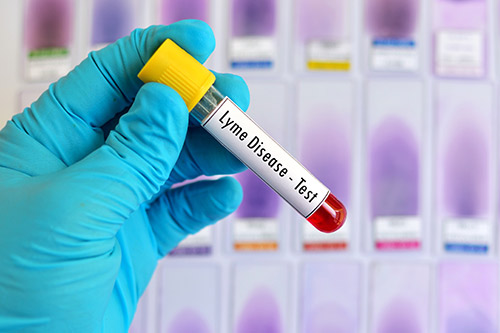 During the first four-to-six weeks of Lyme infection, these Lyme disease tests are unreliable because most people have not yet developed the antibody response that the test measures. Even later in the illness, the two-tiered testing is highly insensitive missing roughly half of those who have Lyme disease.

HIV/AIDS is diagnosed with tests that are both highly sensitive and highly specific. They are accurate more than 99% of the time. In Lyme disease, the second test is highly specific. So there are few false positives. Unfortunately, the screening test is highly insensitive and fails to accurately identify patients who have Lyme disease. The two-tiered test system misses roughly 54% of patients. (Stricker Minerva 2010) 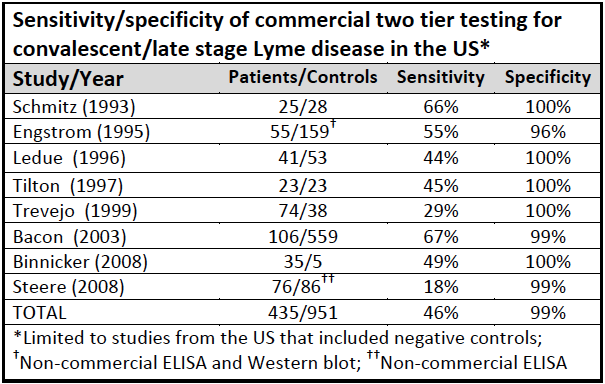 Because of this, LDo recommends the patients and physicians skip the ELISA and go straight to the Western blot. 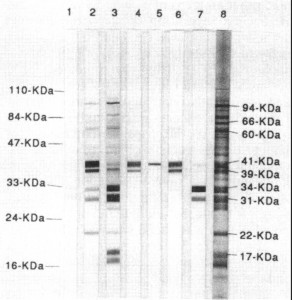 Labs performing a Western blot use electricity to separate proteins called antigens into bands. The read-out from the Western blot looks like a bar code. The lab compares the pattern produced by running the test with your blood to a template pattern representing known cases of Lyme disease. If your blot has bands in the right places, and the right number of bands, it is positive.

The chart below will help you understand how to interpret the western blot test. 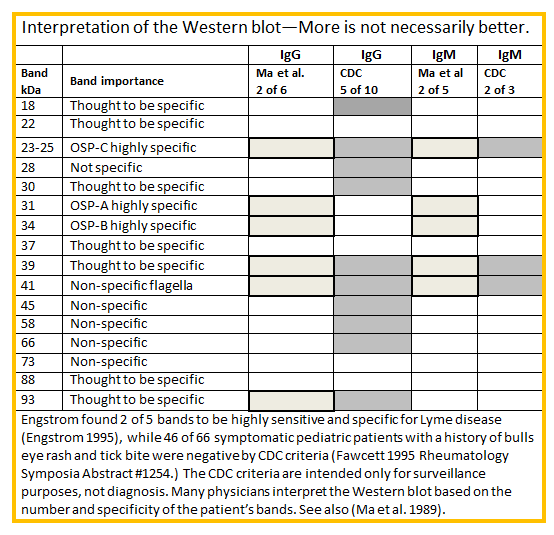 The IgM and IgG ImmunoBlot (IB) are qualitative immunoassays in which antibodies are visualized. They are used to determine whether pathogen-specific antibodies are present in patient serum or plasma. These tests are generally more sensitive and specific than the Western Blot, ELISA and IFA tests. Learn more about these Lyme disease tests that IGENEX offers.

Three other tests that may be used to diagnose Lyme disease are polymerase chain reaction (PCR), antigen detection and culture testing. They are called “direct” tests because they detect the bacteria, not just your immune response to it.

PCR multiplies a key portion of DNA from the Lyme bacteria so that it can be detected. While PCR is highly accurate when the Lyme DNA is detected, it produces many false negatives. This is because the Lyme bacteria are sparse and may not be in the sample tested.

Culture is the “gold standard” test for identifying bacteria. The lab takes a sample of blood or other fluid from the patient and attempts to grow Lyme spirochetes in a special medium.

Although culture tests are generally accepted as proof of infection, the CDC has advised caution on the only commercially available culture test developed by Advanced Laboratory Services. LDo recognizes that the test is new and requires further validation in other studies. However, we believe that informed patients should be able to choose the test if they prefer. Choice is particularly important given the low quality of Lyme disease tests generally.

Although the CDC recommends that patients use “FDA-approved” tests, LDo does not support this restriction because there are no FDA-approved test for Lyme disease.  Instead, the the FDA has “cleared” certain lab tests, but these test are not required to demonstrate that they are effective or safe, they are only required to be “equivalent” to test previously cleared.  The current FDA cleared tests have poor sensitivity and miss more than 50% of patients with Lyme disease.  The US Centers for Medicare & Medicaid Services (CMS) requires tests without FDA approval to undergo a rigorous certification process. CMS regulates all laboratory testing (except research) performed on humans in the U.S. through the Clinical Laboratory Improvement Amendments (CLIA). CLIA certification is designed to ensure quality laboratory testing. All clinical laboratories must be properly certified to receive Medicare or Medicaid payments. CLIA covers approximately 244,000 laboratory entities.

Two highly specific bands (OspA and OspB) are not included in the CDC bands because they were used for vaccine development. Your doctor may want to know if you have antibodies directed towards those proteins. A few labs test for them.

LDo recommends that you use a CLIA-approved lab that specializes in testing for tick-borne diseases and reports all bands on the Western blot. The healthcare professional ordering the test must ask the lab to report all bands except in the case of IGeneX, which automatically reports all bands. Blots may still vary in sensitivity. 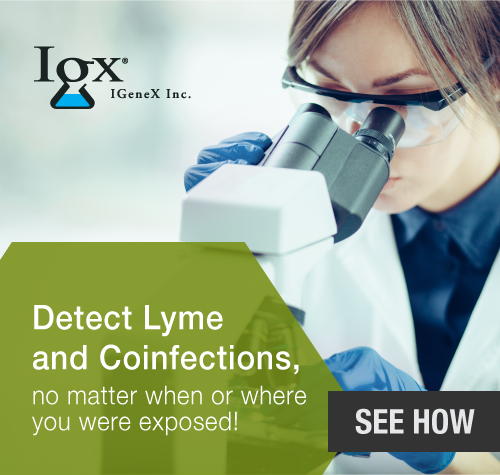