If Lyme disease is not diagnosed and treated early, the spirochetes can spread and may go into hiding in different parts of the body. Weeks, months or even years later, patients may develop problems with the brain and nervous system, muscles and joints, heart and circulation, digestion, reproductive system, and skin. Symptoms may disappear even without treatment and different symptoms may appear at different times.

Untreated or undertreated Lyme can cause some people to develop severe symptoms that are hard to resolve. This condition may be referred to as post-treatment Lyme disease (PTLD) or chronic Lyme disease (CLD). We don’t know exactly how many people who are diagnosed and treated remain ill. CDC estimates range from 10-20%. A recent study of early Lyme disease treated at EM rash reported 36% remain ill. (Aucott 2013)

The International Lyme and Associated Diseases Society (ILADS) published treatment guidelines which contains a rigorous assessment of the evidence and found treatment failure rates ranging from 16% to 39% for early treatment. Estimates for patients with chronic Lyme disease are much higher, ranging from 26% to 50%. (Johnson 2004)

Although experts do not often attribute deaths to Lyme disease, studies have documented at least 23. In 2014, the CDC issued a warning regarding three sudden cardiac deaths related to Lyme carditis.

Many patients with chronic Lyme disease are profoundly debilitated. Investigators of the four NIH-sponsored retreatment trials documented that the patients’ quality of life was consistently worse than that of control populations and equivalent to that of patients with congestive heart failure. Pain levels were similar to those of post-surgical patients, and fatigue was on par with that seen in multiple sclerosis.

An LDo published survey of over 3,000 patients with chronic Lyme disease found that patients suffer a worse quality of life than most other chronic illnesses, including congestive heart failure, diabetes, multiple sclerosis and arthritis. Over 70% of patients with chronic Lyme disease reported fair or poor health. Similar results have been found in other studies. (Cameron, 2008) 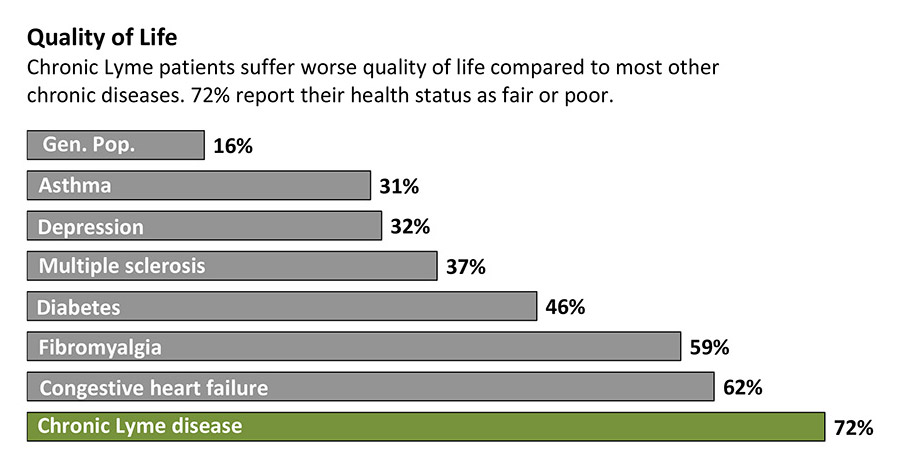 Many of the symptoms associated with Lyme disease are common in other diseases. The CDC surveillance criteria for confirmed cases specifically exclude most of the symptoms that patients report, including fatigue, sleep impairment, joint pain, muscle aches, other pain, depression, cognitive impairment, neuropathy, and headaches. However, these common symptoms can be severe and may seriously affect quality of life.

In LDo’s chronic Lyme disease survey, over 75% of patients reported at least one symptom as severe or very severe and 63% reported two or more such symptoms. (Johnson 2014) Find out more about LDo peer-reviewed published surveys. The chart below shows the severity of ten common chronic Lyme symptoms. 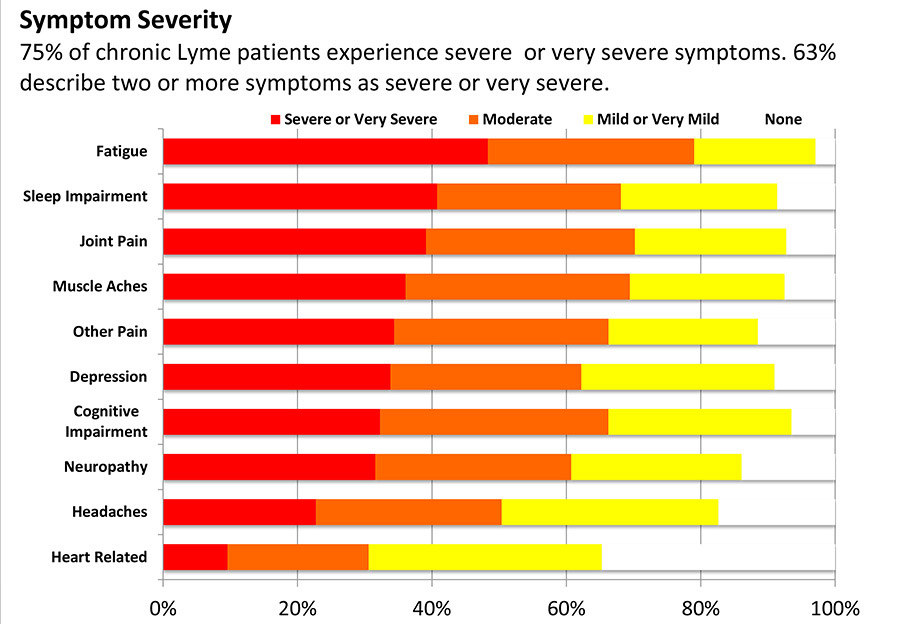