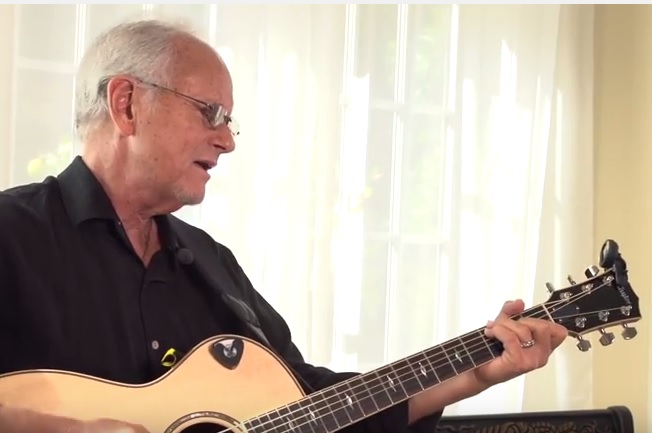 In 1995, fire erupted at California’s Point Reyes National Seashore, a place of wild beauty about 30 miles north of San Francisco. Fed by hot, dry winds, the conflagration scorched more than 12,000 acres of brush and woods.

Forty-five buildings went up in flames, including the home of legendary singer/songwriter Jesse Colin Young and his family.

Young didn’t realize it at the time, but the fire and its aftermath would mark a significant turning point in his life. It set in motion forces that pulled him into a downward spiral of poor health and emotional turmoil, before leading to a surprise diagnosis of neurological Lyme disease.

He has endeavored to capture what happened in a song he calls “Lymelife.” In it, he distills many years of experience into 30 lines of lyrics.

He and his band the Youngbloods burst into musical prominence during the 1960s with their hit song “Get Together.” Just about anybody who lived through that era probably recalls its refrain:

Come on, people now. Smile on your brother.
Everybody get together, try to love one another right now.

Having grown up in New York, Young moved to Point Reyes in 1967 because its natural splendor entranced him. He reveled in its solitude and stunning landscape.

“That’s where my journey began,” Young said in a recent telephone interview. “Hiking in those woods and riding my motorcycle out to the beach. Coming from the lower east side of New York, I felt like I had died and gone to heaven. That’s what the beginning of the song Lymelife is about. I had this powerful, beautiful experience of nature…and there were seals that lived right there on the beach at Limontour Spit, and deer running all over, great herds of them, all over the place. I loved it.”

As he sings in Lymelife:

I loved the woods and the wildest places
I made trails that had left no traces.
I followed them to the ocean roar
Who on earth could have asked for more?

I spoke with seals and the white deer running
Hawks and owls and a cougar cunning
I breathed with dolphins as they swam by
A blood red sunset in my eye.

During almost 30 years of delighting in the natural world of Point Reyes, Young often pulled ticks off his body and thought nothing of it. Then his house burned down.

“It was a crushing blow for me. I had fallen in love with that area, I made music about it, had been inspired by it. I think that’s what brought out the Lyme, that the blow of that fire took me down so far emotionally and eventually physically. However long I had been carrying that Lyme disease in my body, it decided it was time to take over.”

But he wouldn’t realize that for many years. After the fire, he and his wife moved to Hawaii to live in a house on a small coffee plantation.

Soon, Young says, “I thought I was going crazy. I had a lot of anxiety, panic attacks, and strange symptoms of having difficulty swallowing. All these things they just assumed were psychosomatic, because I’d been through the traumatic experience of losing my house like that. The only thing doctors could think of was to put me on anti-depressants.”

Young suffered for years from cognitive impairment, depression, mood swings, and various pains—not knowing what was really wrong, getting little relief from any treatment his doctors offered.

There’s so much to learn, tell me where do I turn?
Now that I’ve lost my health, my sanity?
I’m angry, I’m sad.
I’m frightened, I’m mad
I’m feeling the bite of inhumanity

“I think that if I had not married such a loving and strong woman as my wife Connie that my family would have blown apart.”

Another turn of fate

Then, in the mid-2000s, Young says, his wife went to a family funeral in Ohio. There she saw her cousin, Barbara Buchman, who happens to be the executive director of the International Lyme and Associated Diseases Society (ILADS).

Buchman gave her cousin a copy of an ILADS brochure about Lyme and psychiatric symptoms.

“So the brochure ended up on our kitchen counter. (Whether there were angels involved, I don’t know.) I read it and thought: this is my biography.”

“And that began my journey to regain my sanity. That, and giving up drinking. Because, when you don’t know what’s happening, you medicate with whatever tools are at hand. And alcohol became another trap for me. So between my sobriety and entering antibiotic treatment with Dr. Horowitz, I began to see my mind come back to me.”

Young said he’s not particularly fond of media interviews, but he did a few that mentioned Lyme disease. As a result, he started receiving emails from people talking about their own Lyme struggles. Hearing their stories motivated him to write the song Lymelife.

And when I wake tomorrow morning, who will I be?
A man who’s strong and willing, or lost and angry?
Someone’s cherished lover, or my lover’s enemy?

“This song is my gift”

“As long as the infectious disease doctors in America and the CDC deny the existence of chronic Lyme, those who have been suffering for decades will not get proper treatment. That’s what I’m trying to help with. This song is my gift. It’s what I do best.”

Young now lives in South Carolina, his wife’s home state. He’s working on an album of songs which won’t all be about Lyme disease. However, since he says “I seem to be slow at writing and recording,” he has chosen to make “Lymelife” available as a YouTube video.

It’s a simple production, showing Young playing his guitar while perched on the arm of what appears to be his living room couch. A dog dozes at his side. The video was made without a band, studio, or producer. Yet the song exerts a visceral power—the sense that Young is clearly singing from the depths of personal anguish.

“It was important for me to show the pain and confusion and loss of cognitive abilities—and the loss of your sense of who you are. It’s a cry for help for our community, a cry for recognition.”

You can watch the Lymelife video here: