LYMEPOLICYWONK: Update on TBD Working Group. How did we do? 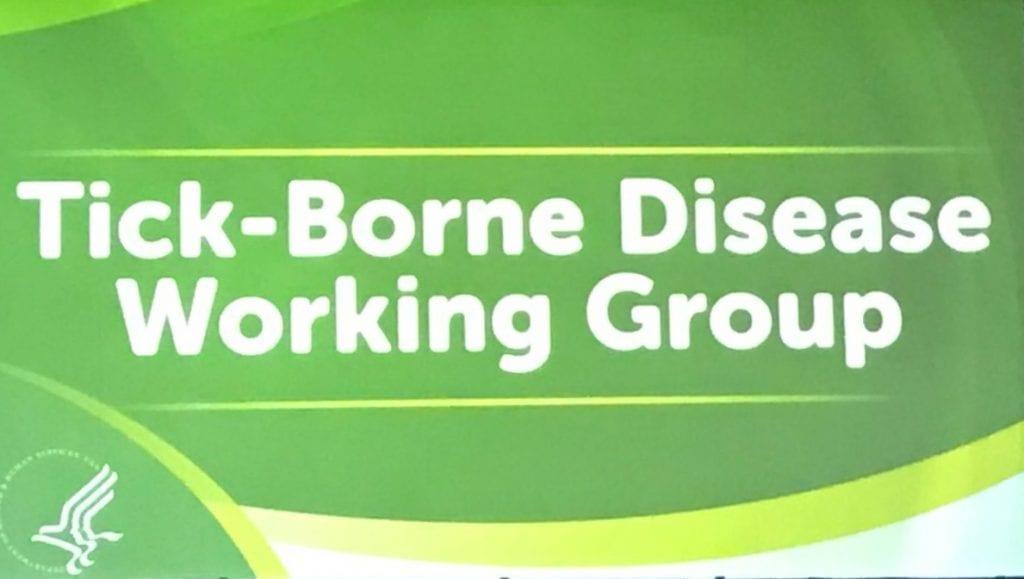 There have been a lot of questions raised about the federal Tick-Borne Disease Working Group and how the Lyme community has participated in the process.

Here’s a Q and A to bring you up to speed before the group’s next meeting on June 21.

What exactly is the Tick-Borne Disease Working Group supposed to do?

The Working Group was authorized by the 21st Century Cures Act to examine the subject of Lyme and other tick-borne diseases. Its purpose is to:

The group does not have the authority to pass laws. It only has the ability to recommend congressional action, which it will do in the form of reports submitted to Congress in 2018, 2020, and 2022.

The process established for the Working Group requires process integrity and transparency under FACA and the Sunshine Act.  This means that:

The Working Group met four times between December 11, 2017 and May 16,, 2018. Two of these meetings were by telephone and two were in person. At the last meeting in May, the Working Group discussed recommendations to be made to Congress, which it is currently in the process of drafting.

To help accomplish its goals, the Working Group was authorized to establish subcommittees composed of existing group members and other individuals with tick-borne disease expertise and knowledge. The subcommittees formed were:

These subcommittees conducted regular meetings to consider relevant issues.  For example, the subcommittee I served on—Pathogenesis, Transmission, and Treatment—met once a week by telephone for an hour and a half.  These meetings usually started with one or two presentations on a topic under consideration and were followed by extensive discussion.

In between meetings, we broke our group into three sections to draft different portions of a report to the Working Group, which our entire subcommittee voted on. We worked practically around the clock to prepare our report, which was 136 pages long. We had a little over two months to perform this Herculean task. The tight time frame was necessary for the Working Group to be able to submit its report to Congress later this year.

Processes like these do not guarantee particular outcomes, but they do provide voice, transparency, and a place for opposition. You might recall that LymeDisease.org enlisted more than 10,000 people in a matter of days to protest the naming of Dr. Gary Wormser to the Working Group. As a result, he withdrew from the panel. (We objected to Wormser’s place on the panel because of his serious financial conflicts of interest.)

We were able to do this because the names of the group members were made public. This does not happen in closed processes. For example, we still do not know the identity of the two patients chosen by the Infectious Diseases Society of America (IDSA) to sit on its current Lyme guidelines panel. The IDSA says it will not disclose patients’ names, in order to “protect” them. This might be appropriate for rape victims; however, people chosen to represent the interests of patients should be known and respected by the community they represent. So, transparency is critically important to the Lyme community.

For example, the Disease Vectors, Surveillance, and Prevention subcommittee report includes a very important minority report on the misuse of the surveillance criteria for diagnosis. The TBDWG is also expected to have minority reports by those who disagreed with various majority votes. For example, there was disagreement on the issue of diagnostic testing (discussed below), which should permit a minority report to be filed by the patient representatives.

What about the balance of members on the subcommittees?

Each subcommittee Chair and Co-Chair chose the members from the list of those who applied in an open public process. Members of the Working Group included known advocates in the community and treating physicians, such as Pat Smith of the national Lyme Disease Association, Wendy Adams from Bay Area Lyme Foundation, Robert Sabatino of Lyme Society, Inc., and Dr. Richard Horowitz from ILADS. Three members of the LymeDisease.org board, Dr. Chris Green, Phyllis Mervine and I, applied and were selected to serve on subcommittees.

On my subcommittee, we also had Dr. Brian Fallon, Wendy Adams, and Dr. Sam Donta, an infectious disease specialist who was kicked off of one of the IDSA guidelines panels when he disagreed with the viewpoint that Lyme disease was easy to diagnose and cure. I did not find the government employees to be biased on my subcommittee, but this may have varied from subcommittee to subcommittee.

Many patient groups, including LymeDisease.org, were unhappy with the results of the vaccine subcommittee’s report. Several of our board members filed written comments criticizing the failure of the subcommittee to openly discuss safety issues connected with the LYMErix vaccine, which was briefly on the market from 1998-2002.

At the May 16 meeting, Working Group members Pat Smith, Kristen Honey, and Wendy Adams pressed for a thorough examination of problems associated with the old vaccine, before going forward with any recommendations for a new vaccine. They said that without transparency about the issues with the past vaccine, there would be no trust in the patient community for a new vaccine.

Specifically, they were referring to the fact that the vaccine was withdrawn from the market due to safety concerns in the midst of a class action lawsuit by patients for vaccine-related adverse events and injuries against the manufacturer, SmithKline Beecham (now GlaxoSmithKline). (A copy of the settlement of the lawsuit can be downloaded here: 2003 Vaccine Judgement)

I’ve heard some contradictory things about what the TBDWG decided on diagnostic testing.  What happened?

On testing, the TBDWG voted on two major issues, both of which were raised at the insistence of the patient community.

What other important issues were addressed?

The Pathogenesis, Transmission, and Treatment Subcommittee, on which I served, made major points about patient-centered outcomes, shared medical decision-making, patient engagement in research, and innovative research designs. I believe that unless the patients are at the center of research and the results of clinical research apply to patients seen in clinical practice and focus on outcomes that patients see as important, we will not be able to make progress.

For example, some trials use resolution of an EM rash as the “success” endpoint, but patients can have the rash clear up and yet still remain ill. Patients don’t just want their rash to go away–they want to be well! Similarly, the trials funded by the National Institute of Health for chronic Lyme excluded up to 89-99% of the patients who tried to enroll. Restrictive entry criteria necessarily mean that the results of those trials will not apply to most patients.

My subcommittee also extensively discussed the evidence supporting persistence of the Lyme spirochete in animals and humans. The aim here was to illuminate all of the known facts, not to prevail on a viewpoint.

Finally, we objected to the use of nomenclature that is dismissive or stigmatizing to patients as well. We highlighted the fact that the term “Post Treatment Lyme Disease Syndrome” (PTLDS) excludes most of the clinical population with the late or chronic Lyme disease. This issue has never been raised in a public forum before. It is critical because the research definition of PTLDS is being misapplied to clinical diagnosis.

I am quite pleased with the report that came out of our subcommittee. I believe it really moves the needle forward in terms of patient-centered research, shared medical decision-making, innovative clinical trials, persistence, and the use of stigmatizing language such as Post Treatment Lyme Disease Syndrome to describe patients. I encourage people to read the actual reports of the subcommittees, which are quite extensive.

The Working Group report to Congress will not be finalized for some time. As I noted above, process integrity alone cannot ensure outcomes. However, I appreciated the opportunity for the patient voice to be heard, the transparency of the process, and the ability of those who dissented from the group to have their views memorialized in a minority report.  These are the hallmarks of process integrity.