About Ticks and Lyme Disease

Ticks are small crawling bugs in the spider family. They are arachnids, not insects. There are hundreds of different kinds of ticks in the world. Many of them carry bacteria, viruses or other pathogens that cause disease in humans and/or animals.

In the midwestern and eastern United States, Ixodes scapularis or deer tick is the primary vector of Lyme disease.  On the West Coast, the spirochete is carried by Ixodes pacificus or western black-legged tick. In the South, lone star ticks (Amblyomma americanum) can also transmit Lyme disease or a closely related illness. 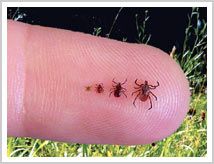 Ticks have four life stages: egg, larva, nymph and adult. In each stage after hatching, they suck blood from animals like mice, squirrels, birds and deer. Then they drop off, enter a dormant period and molt to enter the next stage.

Ticks don’t start out being infected with Lyme. They get it by feeding on an infected animal, often a mouse or other small rodent. Then, they pass it along to the next animal or person they bite.

How long does it take the tick to transmit Lyme?

Experts disagree about how long it takes a tick to transmit Lyme disease. The CDC says that in most cases, the tick must be attached more than 24 hours.

We think that gives people a false sense of security. In some research studies, 5-7% of nymphs transmitted the Lyme bacteria in less than 24 hours. One paper reported on a case of Lyme disease transmitted after six hours of tick attachment. The risk may be low the first day, but it’s not zero.

Furthermore, some studies show that only 30% of patients with Lyme disease recall a tick bite. If people don’t even realize that they were bitten, how could they know how long the tick was attached?

The longer a tick stays on you, the more likely it will transmit disease. It’s important to find and remove any tick as soon as possible.

Can other bugs give me Lyme?

Researchers have found spirochetes in mosquitoes and other blood-sucking insects. But it has not been proven that they can transmit the infection.

A tick is uniquely suited to carry and spread Lyme disease. Spirochetes have co-evolved with ticks over millions of years.  Tick saliva contains immune suppressors that help disseminate the bacteria throughout the host’s body. And, because ticks feed on many different animals, they can spread the disease widely. 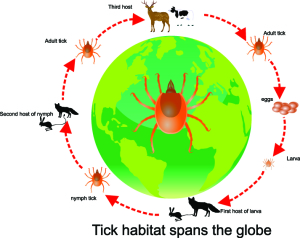 Where do we find ticks?

Generally, you can find ticks where the animals they feed on live. This usually includes wooded and grassy areas. An adult tick “quests” for its next blood meal by climbing up grasses and bushes to wait for an animal to pass by. Nymphs and larvae are typically found in layers of decomposing leaves underneath trees. Ticks thrive in damp environments and are less active in hot, dry weather.

Which ticks should I worry about?

Nymphal ticks cause most cases of Lyme disease. Because nymphs are as small as poppy seeds and their bite is painless, people often don’t realize they have been bitten. Adult ticks can also infect humans, but are easier to spot and remove.

Not all ticks are infected. Because tick studies have only been done in a relatively few places, in most of the US, tick infection rates are unknown. Even in places where ticks generally do not carry Lyme, there may be hotspots of infection depending on local conditions. The tick infection rate may also change from year to year, even in one location.

To get a better idea of which tick-borne diseases have been found in your area, check this site.

Adult ticks feed and mate primarily on deer. You may also find adult ticks on dogs, horses and other domesticated animals. Nymphs feed primarily on smaller animals. These include squirrels, mice, lizards, rabbits, and birds that feed on the ground. Migratory birds help distribute ticks throughout the country.

A multitude of environmental and human factors has created a near “perfect storm” over the past 20 years leading to a population explosion of ticks throughout North America. Learn more about the types of ticks.