The IDSA’s 2015 annual conference is in San Diego this October. LymeDisease.org, the MayDay Project, and the San Diego Lyme Disease Support Group are teaming up to hold a protest there.

Scroll down on this page to learn more about why we protest against the IDSA. 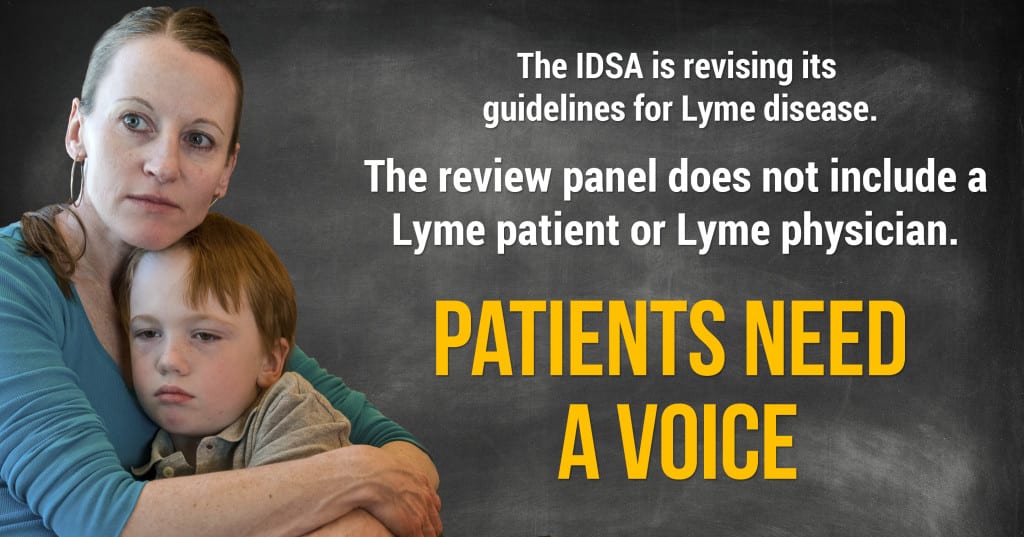 WHY THEY MATTER SO MUCH

The Infectious Diseases Society of America’s current Lyme disease guidelines make it hard for people to get properly diagnosed and treated for Lyme disease. And because these guidelines are followed by many insurers, patients often have to pay out of pocket for most of their Lyme disease treatment. The guidelines are also used as a sword against physicians who choose to treat patients suffering from chronic Lyme disease. Failing to follow the IDSA guidelines can get doctors in trouble with their state medical boards. Many have lost their licenses.

On March 9, 2015, the IDSA announced that it will be updating its Lyme disease guidelines. As the first stage of this process, it announced its formation of a review panel. and opened a 30-day window for public comment. This period initially closed on April 9, but was extended to April 24. (link to blog)

LymeDisease.org and the national Lyme Disease Association filed comments on behalf of 67 patient groups across the nation. Also during the comment period, LymeDisease.org launched a nationwide survey to solicit views from Lyme patients. It drew more than 5500 responses in 10 days. We included findings from that survey in the comments we filed.

We are deeply troubled by many aspects of the IDSA’s guidelines process. The IDSA says it will comply with the Institute of Medicine’s standards for creating trustworthy guidelines. Yet, it appears the IDSA is already violating the IOM’s recommendations.

All were implicated by an antitrust investigation by the Connecticut Attorney General in connection with the development of the 2006 IDSA Lyme guidelines. Key members from all three organizations who sat on the panel of the 2006 IDSA Lyme guidelines as well as two of the organizations, the AAN and IDSA, were subject to the investigation by the Attorney General.

The bottom line is that each of these organizations has an interest in supporting a guideline development process that vindicates them and their members from the damage to their reputations incurred in the anti-trust investigation in connection with the development of the IDSA 2006 Lyme guidelines.  Developing guidelines that confirm the recommendations in their 2006 Lyme guidelines would accomplish this goal.

The panel is supposed to take a systematic, impartial and rigorous look at scientific evidence related to Lyme diagnosis and treatment. Yet that doesn’t seem to be the IDSA approach. The 2006 panel ignored studies that didn’t support its pre-drawn conclusions. And 40% of its citations were to research studies authored by members of the panel.

The new panel seems poised to go down the same inappropriate road. Before it even starts deliberating, key members appear to be trying to “front load” the evidence. How are they doing this? By rushing to publication a number of biased journal articles, which they can then cite as “evidence” backing their position.

This is stacking the deck.  It’s making sure you have your biased research on the top of the pile, then reviewing it with your own eyes and finding it top rate.  Panel members should not be in a position to review and promote their own work while excluding work of their peers. That is not an unbiased review. It makes a mockery of the scientific process.

WE CONCLUDE WITH THE FOLLOWING RECOMMENDATIONS:

The current Plan fails to provide the type of process integrity essential to creating trustworthy guidelines. We believe that the Plan to should be revised to achieve the following goals.

The comments were submitted by LymeDisease.org and the national Lyme Disease Association on behalf of 67 Lyme organizations across the country: