Bartonella are bacteria that live primarily inside the lining of the blood vessels. They can infect humans, mammals and a wide range of wild animals. The disease that results is called bartonellosis.

Bartonella henselae causes an important emerging infection that was first reported in 1990. It is mainly carried by cats and causes cat-scratch disease, endocarditis, and several other serious diseases in humans.

Transmission Of The Bartonella Bacteria

Bartonella bacteria are known to be carried by fleas, body lice and ticks, and there’s high suspicion that ticks transmit it to humans. People with tick bites and no known exposure to cats have acquired the disease. People who recall being bitten by ticks have been co-infected with the Lyme spirochete and bartonella. Scientists have recently established that ticks can transmit Bartonella to mice. More research needs to be done to establish the role of ticks in spreading the disease. In addition, a recent study suggests that bartonella may be passed from mother to unborn child (perinatal transmission). 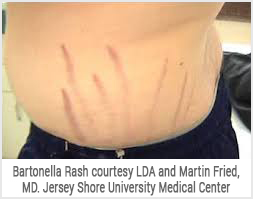 Historically, bartonellosis has been described as a mild, acute, and self-limiting illness. However, more and more doctors recognize that bartonella can cause chronic infection. Patients may suffer relapses because bartonella periodically cycles into red blood cells, which may provide a protective niche for the bacteria.

Early signs of bartonellosis include fever, fatigue, headache, poor appetite, and an unusual streaked rash that resembles “stretch marks” from pregnancy. Swollen glands are typical, especially around the head, neck and arms. Patients with bartonelliosis report more neurological symptoms and are more likely to have visited a neurologist than members of the general population. Some common symptoms include blurred vision, numbness in the extremities, memory loss, balance problems, headaches, ataxia (unsteady gait), and tremors. Bartonellosis also sometimes triggers psychiatric manifestations.

Polymerase chain reaction (PCR) and tissue biopsy can be used. However they are also insensitive, as are standard blood tests. Dr. Ed Breitschwerdt, a professor of Veterinary Science at North Carolina State University who has studied bartonellosis extensively, notes that tests for the bacteria may be negative one time and positive another.

Fluoroquinolones and doxycycline are sometimes successful in treating bartonellosis. However, some doctors report the need to use several antibiotics in combination.

CDC reports that they have identified six strains of Bartonella in patients with chronic symptoms.

CDC researchers report that they have identified six strains of Bartonella in patients with chronic subjective symptoms and a history of tick bites.

Bartonelleosis should be included in the differential diagnosis for patients exposed to tick bites.

This research is very important to patients with Lyme disease because it confirms that the transmission of bartonella from ticks may produce Bartonelleosis.