Will MA Governor Charlie Baker be on the right side of history? 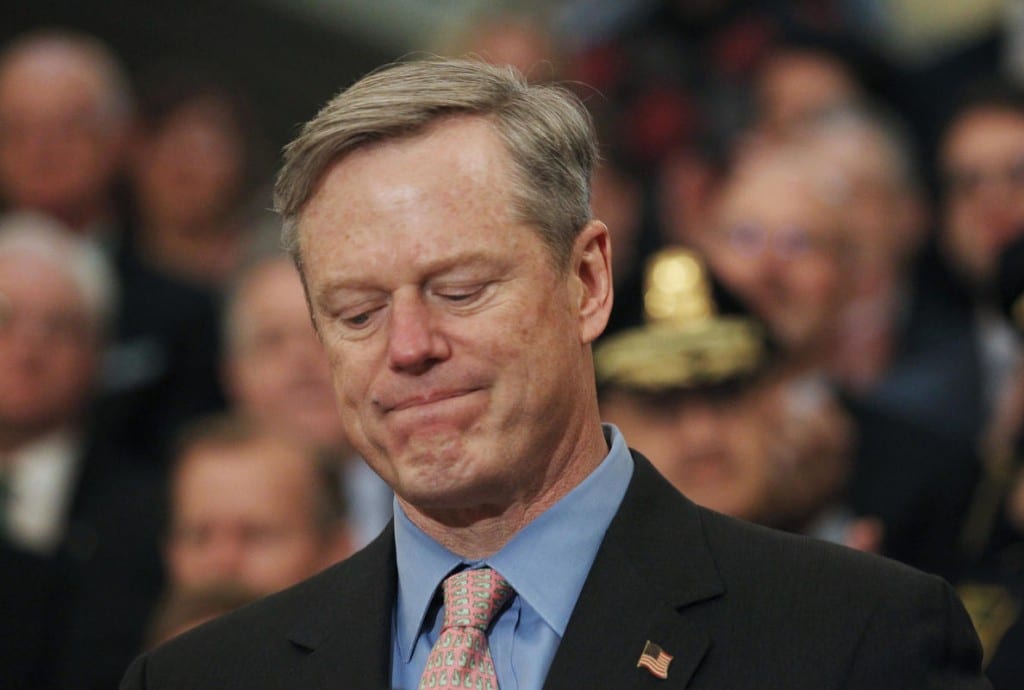 
LymeDisease.org writes to Governor Baker urging him to sign the insurance bill

Massachusetts Governor Charlie Baker has a few days to sign or veto the Lyme insurance bill patients and legislators have been working on for several years. It’s been a roller coaster ride for advocates. The first time the bill went to Baker embedded in a budget bill. He took the opportunity to rewrite the language, turning the patient-friendly legislation into a very bad bill that would have limited patients’ options and made it harder for them to obtain treatment.

Thankfully, the legislature rejected Baker’s amendment and sent him back the original language. This time if he signs it, all is well and Massachusetts will be the second state in the Union (after Rhode Island) to give insurance coverage for treatments doctors decide is best for their patients. If he vetoes it, legislators have three days to override, but they must have a super majority. If he does nothing, it passes by default.

It’s a nailbiter. LymeDisease.org is encouraging Gov. Baker to do the right thing. After all, one legislator said it would only cost insurance companies an extra 11 cents per policy to provide this coverage for people with Lyme. (This figure was obtained through a cost analysis that was commissioned by the legislature and performed by an independent agency.)

Here is our letter, sent yesterday. It’s not too late for you to call or write. See ACTION ALERT below.

I am writing on behalf of LymeDisease.org, a leading national patient advocacy organization, to urge you to sign the Lyme Insurance Legislation, H.4491.

As you know, the practice of medicine is not a cookbook science, but rather requires a patient-centered, individualized approach. This is especially true in the complicated and highly personalized treatment needed for Lyme disease. However, many patients cannot get the help they need because their health insurance refuses to pay for their treatment. Lymedisease.org believes that decisions about medical treatment should be between the patient and his or her doctor. To give fiscally motivated insurance companies power to deny care, especially long-term care, takes away physicians’ ability to use their clinical judgment and damages patient lives.

LymeDisease.org is the number one trusted source of information in the Lyme community and has the largest internet presence among all the grassroots Lyme organizations. We have been actively promoting patient interests since 1989, with surveys, a big data research project, educational events, website, a journal, and political action. Over four million people visit our website annually while our Facebook and Twitter reach tens of thousands more. LymeDisease.org also hosts online state groups across the country. Our Massachusetts group is large and active.

We have collaborated with several states on legislation to enable doctors to use their clinical judgement when treating Lyme patients who do not recover after short-term treatment. We have worked with CA legislators to pass a number of bills improving care of people with Lyme in California.

LymeDisease.org was invited to testify at a hearing on Lyme disease conducted by the Institutes of Medicine (IOM) in 2010. A subsequent IOM hearing on developing trustworthy guidelines led to the Infectious Diseases Society of America (IDSA) being held up as an example of a guidelines process gone wrong. In 2015 we participated in a meeting on precision medicine at the White House, and earlier this year we spoke at the annual meeting of the American Academy for the Advancement of Science in Washington, DC.

Many insurance companies cite the guidelines issued by the IDSA as their justification for denial of coverage. The IDSA is the private medical society responsible for the myth that Lyme is curable with a few short weeks of antibiotics. In 2006, we worked closely with then-CT Attorney General Blumenthal’s office to initiate a civil investigation of the IDSA that resulted in the censure of that organization. (http://www.ct.gov/ag/cwp/view.asp?a=2795&q=414284) Their guidelines are out of date and have been delisted by the National Guidelines Clearinghouse.

The only guidelines currently listed by the National Guidelines Clearinghouse are from the International Lyme and Associated Diseases Society (ILADS). They are patient-centered and advocate that physicians should use their clinical judgment to create individualized treatment plans for their patients, including extended treatment in selected cases. Additionally, the guidelines follow a systematic and transparent analysis of the evidence used by the Cochrane Collaboration and the WHO and comply with the eight standards identified by the Institute of Medicine as being critical to trustworthiness.

Lyme costs accrue to patients and society, not insurance companies


In 2013, when MA legislators were first working on this bill, LymeDisease.org’s CEO, Lorraine Johnson, JD, MBA, presented a slide show about displaced costs in the context of Lyme disease and insurance coverage. ( https://www.lymedisease.org/lyme-basics/resources/massachusetts-insurance-legislation-lyme-disease/  ) Her research was based on the results of surveys conducted by Lyme disease.org and the findings of a study by Dr. Zhang of the CDC published in 2006. Since that time, another major cost-of-illness study has been done by John Aucott and colleagues at Johns Hopkins. I share some of her slides below.

Most of the increased cost growth in healthcare in the United States is associated with chronic conditions.[2] Over 80 percent of the costs of health care spending in the United States is related to chronic conditions. Since so many Lyme patients—up to half—become chronic (referred to as either “chronic Lyme” or “post-Lyme syndrome”) this becomes a critical consideration.

Medical insurance is only responsible for direct medical costs—the loss-of-productivity costs are borne by the patient, the family, the community and ultimately the government through lost tax revenues, lowered gross domestic product, and disability support payments. In Massachusetts these costs are estimated at $1.7 billion per year.

The Zhang study found that the cost of Lyme disease increases exponentially over time. As shown, if treated effectively at tick bite, the cost is quite modest. However, once the patient reaches Late Lyme or chronic Lyme, the costs skyrocket.[3]

Unfortunately, we are not diagnosing Lyme early, when it is more easily treatable and the cost are low. In our surveys of patients with chronic Lyme, 84 percent were not diagnosed early and this late diagnosis was a major factor in their development of chronic Lyme disease. The average time between infection and diagnosis was four years.

Our survey of over 4,000 patients with chronic Lyme found that 65 percent had to cut back on work or school at some point in their illness. Forty-four percent had to quit working altogether and another ten percent had to shift from full time to part time work. These people are not only unable to work and support their families, they also exact a high societal cost. One of our published studies found that 25 percent of patients with chronic Lyme had been on public support at some point.[5] Of those who have received disability at some point, 75 percent had been on disability for more than a year, 37 percent for more than five years, resulting in a huge drain on public resources.

Not only are the annual costs of early Lyme small ($1,600) compared to the annual costs of Late Lyme ($20,000), but in early Lyme almost all of the cost is medical and, as shown in the chart below, is born by insurers. Contrastingly, in Late Lyme almost all of the cost is borne by patients, families, communities and, ultimately government. Insurers deny coverage and reduce their costs at the expense of patients and society. We believe it is time to ask the insurers to start paying their fair share and H.4491 is a step in that direction.

Over the past ten years, more than 300,000 Massachusetts residents have contracted Lyme disease, almost five percent of the state’s population. Everyone knows someone with Lyme disease and many have loved ones who are affected by this terrible disease. Our followers have spoken and they want you to sign this legislation. The bill does not dictate treatment or compel doctors to treat in any particular way, nor does it place an undue burden on insurance companies. However, it provides much needed relief to a large, suffering population that is likely to increase as prevention methods do not work and current treatments are only marginally effective.

H.4491 was designed to help patients deal with the crippling costs of Lyme and agreed upon by legislators and thousands of Massachusetts patients. Governor Baker, please let Massachusetts lead the country with this common sense legislation.  If you or a loved one contracted Lyme disease, wouldn’t you want your doctor to be able to prescribe whatever he, in his clinical judgment, felt was right for you, instead of trying to fight with one hand tied behind his back?

[2]  DeVol, R, Bedroussian, A. An Unhealthy America: The Economic Impact of Chronic Disease. 2007.


Call the Governor at 617.725.4005 or use his online form at http://www.mass.gov/governor/constituent-services/contact-governor-office/ (scroll to the bottom) — and ask him to sign H.4491, the Lyme treatment coverage bill.
You can also contact your own Representative and Senator and thank them for their past support (they voted TWICE to pass the bill AND voted to reject the Governor’s changes!!).  Ask them to continue to support the bill, in the event that they need to override a veto by the Governor.
Click here to use Voter Voice to contact your legislators.

MA Lyme insurance bill is down to the wire

Down to the wire in Massachusetts–action alert