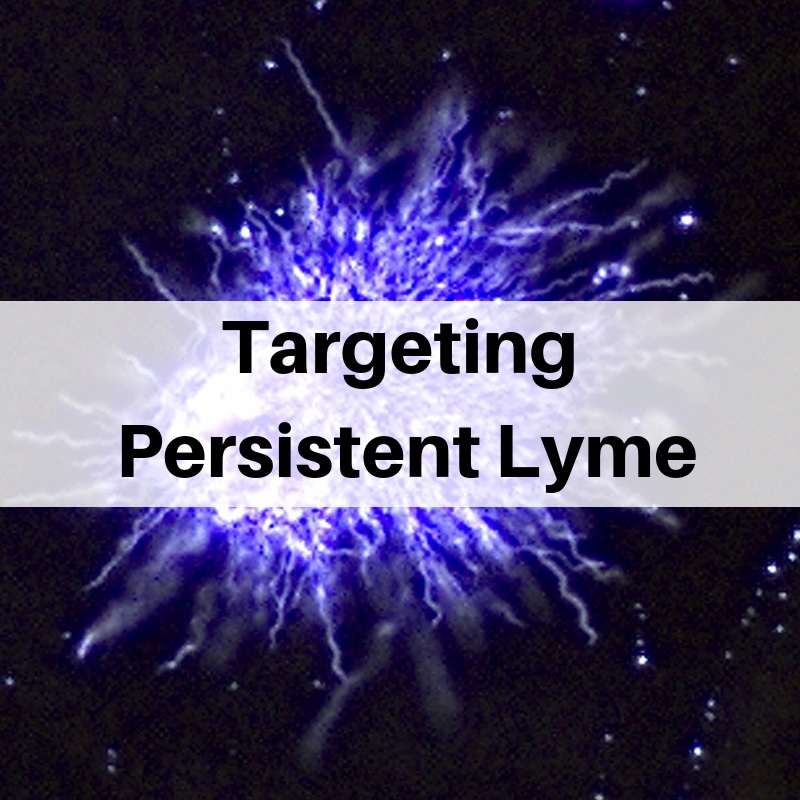 A new study in mice sheds more light on the question of Lyme disease symptoms that persist after a “standard” course of antibiotic treatment.

The study, published March 28 in Discovery Medicine, is the first to look at triple-drug combination antimicrobials in a mouse model. This is a crucial requirement before human clinical trials can begin.

In 2017, there were an estimated 427,430 cases of Lyme disease in the United States. Studies have shown that when diagnosed and treated during the early phase of Lyme, 10-20% of patients will fail to improve after a two-to-four week course of standard antibiotics.

These persistent symptoms, which may include brain fog, pain, headache, and fatigue, have been labeled “Post-Treatment Lyme Disease Syndrome” (PTLDS) by the CDC. (Here’s why LymeDisease.org opposes the use of PTLDS as a diagnostic term.)

Patients who are diagnosed after the infection has disseminated (after four weeks or more), have an even greater chance of having persistent or recurring symptoms following standard treatment.

This new study has two major findings that I will break down in detail. But first, let’s address how Lyme persists, and the hotly debated reasons why so many patients are left with chronic symptoms following treatment for Lyme disease.

Borrelia burgdorferi (Bb) is the pathogen that causes Lyme disease. In its basic, or growing form, Bb lives as a cork-screw shaped spirochete.

However, when Bb encounters stress—from such factors as the environment, contents of the tick gut, the human (or mammal) immune system, or antibiotics—it will change form. Depending on the type of stress, Bb may turn into round body forms (cysts) or biofilm-like microcolonies. This is known as “pleomorphism.”

Most antibiotics are designed to target bacteria in the growing phase. However, when threatened by antibiotics, Borrelia can simply change to a slow-growing or dormant form.

This also makes it difficult to diagnose Lyme disease via standard blood cultures. Furthermore, the lack of adequate blood tests makes it harder to determine whether the infection has cleared or not.

The authors of the new JHU study have shown that these pleomorphic forms are also “persister cells.” They can cause inflammation and contribute to continuing symptoms in Lyme patients.  [I wrote more about “Why persister cells matter with Lyme disease” here.]

There are many reasons why symptoms might persist following standard treatment for Lyme, including:

The authors propose dividing patients with PLD into two categories:

The pleomorphic nature of Borrelia has not gained the attention it deserves in terms of severity of disease and susceptibility to antibiotics. To my knowledge, this is the first mammalian study that separately tests different antibiotics against different forms of Bb. These forms include active spirochetes, (noted as “log phase” in the chart below) and the biofilm/persister form (noted as “MC”).

In this study, researchers grew natural strains of Bb (297 and N40) in the laboratory. Then they separated the bacteria according to pleomorphic form. (See Log phase Bb and MC Bb in table below.) Finally, they injected each of the Bb forms into two separate groups of laboratory mice.

The mice were further separated into sub-groups of five. Researchers then treated each sub-group with a different antibiotic or combination of antibiotics for 30 days as follows: Saline, doxycycline (Dox), ceftriaxone (CefT), Dox+Ceft, vancomycin (Van), Van+CefT or Doxy+CefT+Daptomycin (Dap). The mice were then monitored for an additional 60 days for any relapse and persistent infection.

The conclusions of the study are really quite astonishing!

First, the researchers found that without treatment (saline group), the different pleomorphic forms of Bb caused varying degrees of severity of the disease.

The second major finding is that not all forms of Bb were killed by the single antibiotics that are currently recommended by the CDC (doxycycline, ceftriaxone). Specifically, the researchers found that only the triple-drug combination of doxycycline+ceftriaxone+daptomycin (Dox+CefT+Dap)  eradicated the infection from all the mice—even those infected with the persister forms of Bb (see table below).

The authors state, “The inclusion of persister drug daptomycin in combination with doxycycline and ceftriaxone is critical to eradicating the persistent infection.”

This means that patients who are infected with persister forms of Bb at the onset, and those with late stage (or delayed diagnosis) Lyme may be predisposed to more severe infection and should be treated accordingly

The researchers propose that treating with the proper triple-combination of drugs may provide a cure for persistent symptoms of Lyme disease and are planning the design of a clinical trials to test this theory.

And that is probably the best news patients who continue to suffer with symptoms of Lyme disease have heard in a very, very long time!