TOUCHED BY LYME: Yes, Lyme is here; yes, learn to protect yourself and your family 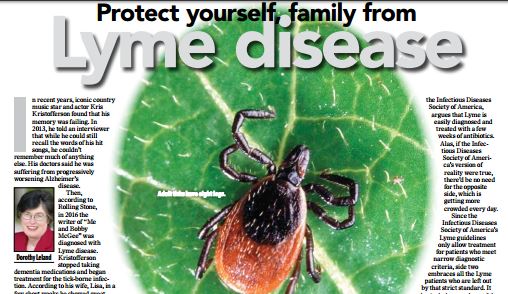 Sometimes my blog’s intended audience is the Lyme community. In contrast, I wrote the following article with the general public in mind–people who may not have an inkling of what Lyme is all about. It was published in the Daily Republic, of Fairfield, CA, on August 20, 2016. Feel free to print this off to use in your own education efforts.

In recent years, iconic country music star and actor Kris Kristofferson found that his memory was failing. In 2013, he told an interviewer that while he could still recall the words of his hit songs, he couldn’t remember much of anything else. His doctors said he was suffering from progressively worsening Alzheimer’s disease.

Then, according to Rolling Stone, in 2016 the writer of “Me and Bobby McGee” was diagnosed with Lyme disease. Kristofferson stopped taking dementia medications and began treatment for the tick-borne infection. According to his wife, Lisa, in a few short weeks he showed great improvement. She told the magazine, “All of a sudden, he was back.”

These celebrities have gone on record saying that they had suffered serious medical symptoms which were either misdiagnosed, or in some cases, totally dismissed by their doctors. All were eventually diagnosed with Lyme disease and say they have improved with treatment.

Kristofferson may have been bitten by a Lyme-infected tick while filming a movie in Vermont. Yet, while Lyme is heavily associated with the northeastern United States, you don’t have to go back east (or be a celebrity) to contract Lyme disease. You can get it right here in Solano County and throughout California.

Lyme disease is a bacterial illness most commonly transmitted by infected ticks, which are tiny spider-like bugs often found in wooded and grassy areas. It may start with flu-like symptoms, such as headaches, fatigue and fever. Sometimes, although not always, there is a “bull’s-eye” rash. If you do have Lyme, this is when you want to be diagnosed and treated, before the microbe burrows into your body and creates long-term problems.

If not caught and treated early, Lyme disease can affect practically every system of the body. It can cause debilitating joint pain, crushing fatigue, insomnia, gastrointestinal dysfunction, life-threatening heart conditions, neurological symptoms and psychiatric disorders – to name a few. In children, it may also bring on learning disabilities and behavioral issues.

The Centers for Disease Control and Prevention estimates that more than 300,000 people in the United States are infected with Lyme every year. That’s almost twice the number of breast cancer cases and six times more than HIV/AIDS.

Unfortunately, however, many who are infected do not get promptly diagnosed and treated.

People who actually have Lyme disease may instead be told they have fibromyalgia, chronic fatigue syndrome, rheumatoid arthritis or Alzheimer’s – all conditions that Lyme disease can mimic. Or they may be told that their symptoms are “all in their head.” (When pop star Avril Lavigne was bedridden for months with serious Lyme symptoms, many doctors attributed it to depression.) Without an accurate diagnosis, people can’t get treated for what’s actually ailing them.

According to MyLymeData, a project which has surveyed more than 5,000 people with Lyme disease, only one-third of respondents were diagnosed within the first year of their illness. For most, diagnosis took three years or longer.

Bryan Sanders, 41, who grew up in Vacaville, remembers: “I was bitten the first time in Pinole, at age 6, while walking through a grassy field. I was bitten again at 19 in Vacaville, in my front yard. I nearly died that time. I developed what doctors called elderly pneumonia (rare in teens) and had 10 percent of one lung left.”

Although Sanders recalls finding embedded ticks on his body on both occasions, nothing was done about it at the time. No one thought to evaluate him for Lyme disease until after many years of ill health. He has suffered with Lyme-related symptoms ever since.

One barrier to prompt diagnosis is the widespread misperception that Lyme isn’t a risk on the West Coast. Yet, there is ample evidence to the contrary.

The California Department of Public Health has documented Ixodes pacificus, the tick that can carry Lyme disease, in 56 of the state’s 58 counties. Stanford University researchers have collected Lyme-infected ticks at major recreation spots throughout the San Francisco Bay Area. A different study found infected ticks on the underside of wooden picnic tables at Berkeley’s Tilden Regional Park.

People have contracted Lyme disease in San Francisco, at Point Reyes, in the Napa Valley, on the hills of the East Bay and in the Santa Cruz Mountains. Anyone who spends time outdoors – for either work or play – is at risk of tick exposure. In addition, ticks can hitch rides on dogs and cats, which may bring them into their owners’ homes.

People unlucky enough to get sick from a tick soon find they have another problem as well. There is fierce debate about Lyme disease in the medical world, and patients are caught in the squeeze.

My family found this out 11 years ago, when out of the blue, my then-13-year-old daughter suddenly became seriously disabled for no apparent cause. Specialists refused to consider the possibility of Lyme disease, even though many of her symptoms pointed to it. She suffered – our whole family suffered – for almost a year before she was finally diagnosed and could start on a Lyme protocol that would eventually bring her back to health.

One side of the debate, represented by the Infectious Diseases Society of America, argues that Lyme is easily diagnosed and treated with a few weeks of antibiotics. Alas, if the IDSA’s version of reality were true, there’d be no need for the opposite side, which is getting more crowded every day.

Since the IDSA’s Lyme guidelines only allow treatment for patients who meet narrow diagnostic criteria, side two embraces all the Lyme patients who are left out by that strict standard. It also includes members of the International Lyme and Associated Diseases Society (ILADS), physicians willing to help chronic Lyme patients when nobody else will. They are joined by scientists whose research contradicts the IDSA’s view of Lyme disease, as well as dedicated advocates working to bring a measure of justice to an acutely unfair situation.

So what’s an individual person to do?

Both sides of the debate agree that your best option is to avoid getting Lyme disease in the first place. Learn how to protect yourself and your family from exposure to ticks and the many infections they can carry – not just Lyme disease. Wear protective clothing and repellents when in tick habitat, check your body for ticks often and properly remove any attached ticks you may find. (See sidebar below.)

If you suspect you might have Lyme disease, look at the “Symptom Checker” at www.lymedisease.org. It’s designed to jumpstart a conversation between you and your doctor about the possibility that you have Lyme disease. Learn as much as you can about tick-borne diseases and their symptoms. Pay attention to changes in your body. If needed, find an ILADS-affiliated physician to investigate further.

Northern Californians live in one of the most beautiful places in the world. All of us – whether celebrities or just regular folks – should be free to enjoy the outdoors without fear of contracting a tick-borne illness. And if we do, we deserve prompt and effective treatment for it.

Ticks tend to be near the ground, in leaf litter, grasses, bushes and fallen logs. High-risk activities include playing in leaves, gathering firewood and leaning against tree trunks. When you hike, stay on cleared trails instead of walking across grassy fields.

Dress defensively. Wear shoes, socks, long pants and long-sleeved shirt. Tie back long hair and wear a hat. You can buy clothing pre-treated with the repellent permethrin at outdoor recreation stores, with protection lasting through 70 washings. Or, you can purchase permethrin and spray clothing yourself, with protection lasting five to six washings.

Spray footwear with permethrin to prevent ticks from crawling up your shoes. In one study, people with treated shoes had 74 percent fewer tick bites than those with untreated shoes.

Apply repellent to exposed skin. Those with DEET, picaridin or lemon eucalyptus oil are the most effective.

While outdoors, periodically inspect your clothing and skin. If you find an attached tick, don’t twist or squeeze it, burn it with matches or douse it with dish soap. Doing so may cause the tick to disgorge its poisons into your body! Use fine-tipped tweezers to grasp it close to the skin and pull gently but firmly.

At the end of the day, run clothing through a hot dryer (before washing) for 10 minutes to kill any live ticks. Then, shower and thoroughly check yourself. Feel for bumps that might be embedded ticks. Pay attention to hidden spots: ears, hair line, armpits, groin and navel. Parents should check their young children.

Examine camping gear such as coats, tents and sleeping bags for unattached ticks before bringing them inside. Check your pets, too. Their fur can act like a “tick magnet,” carrying ticks inside your home. Discuss tick control options with your veterinarian.

Whether or not you find a tick on yourself, watch for symptoms. A rash shaped like a bull’s-eye indicates Lyme disease, but not everybody with Lyme gets one. You might have a different rash or none at all. You may develop flu-like symptoms – fever, headache, nausea – or joint pain or dizziness. If so, see a doctor immediately.

More information is available at LymeDisease.org.