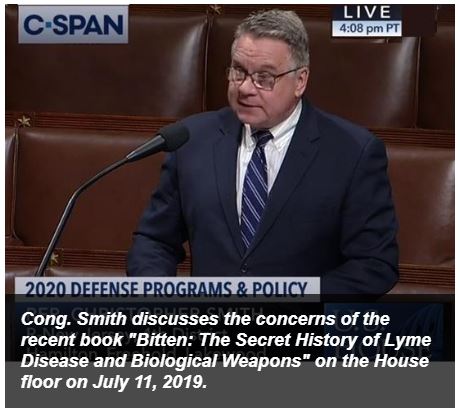 The US House of Representatives last week passed an amendment offered by Rep. Chris Smith of New Jersey questioning a possible link between Lyme disease and biowarfare.

It directs the Inspector General of the Department of Defense to investigate the “possible involvement of DOD biowarfare labs in the weaponization of Lyme disease in ticks and other insects”  from 1950-1975.

According to Smith, he was “inspired to write the amendment”—now part of the House-passed 2020 National Defense Authorization Act (NDAA)—by “a number of books and articles suggesting that significant research had been done at U.S. government facilities including Fort Detrick, Maryland and Plum Island, New York to turn ticks and other insects into bioweapons.”

During debate on the floor, Smith said that, “The most recent book—Bitten: The Secret History of Lyme Disease and Biological Weapons—includes interviews with Dr. Willy Burgdorfer—the researcher who is credited with discovering Lyme disease.  The book reveals that Dr. Burgdorfer was a bioweapons specialist. Those interviews combined with access to Dr. Burgdorfer’s lab files suggest that he and other bioweapons specialists stuffed ticks with pathogens to cause severe disability, disease—even death—to potential enemies.”

News media throughout the country have picked up on the story. Here’s a sampling of coverage:

Read our review of BITTEN here.