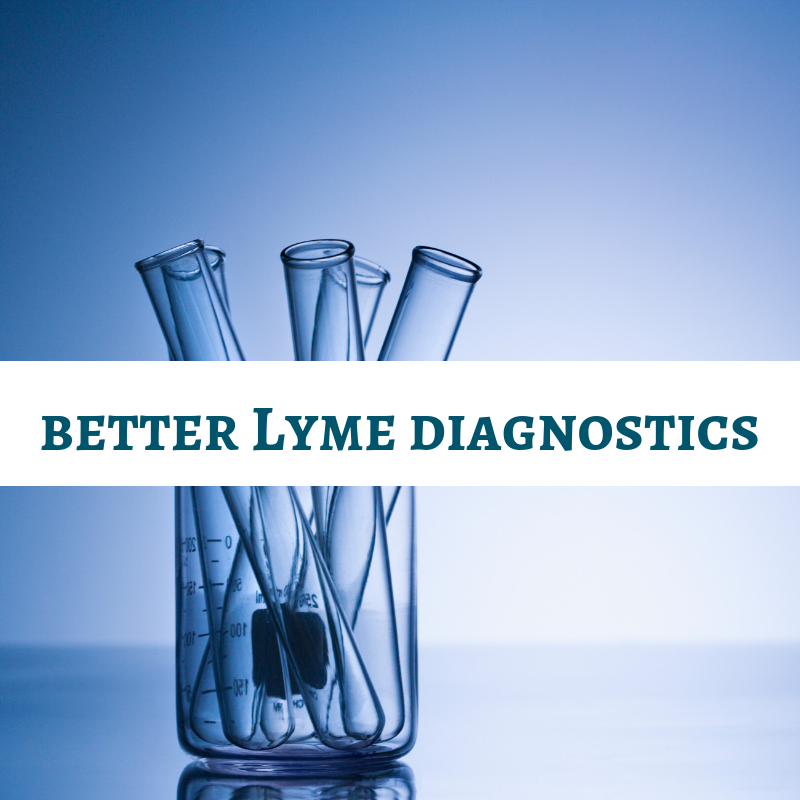 For decades, one of the biggest barriers to good medical care for Lyme disease has been a dearth of effective and accurate Lyme diagnostic tests.

Through the years, the CDC has continued to recommend an inadequate test that was designed in the 1980s.

All along, the CDC, the IDSA, and others in the medical mainstream have insisted that what’s called “two-tier Lyme serology” is the appropriate way to determine who does and does not have the illness.

Now, a group of researchers from Rutgers, Yale, Harvard, FDA, NIH, CDC and other institutions have published an article in Clinical Infectious Diseases acknowledging the failings of the current IDSA diagnostic guidelines recommended at the Dearborn Conference in 1994.

The scientists reached the following conclusion: “The 1994 serodiagnostic testing guidelines predated a full understanding of key B. burgdorferi antigens and have a number of shortcomings.”

“A number of shortcomings? That’s putting it mildly,” says LymeDisease.org’s Founder and President Phyllis Mervine. “Since the first Lyme case was identified in 1977, the Lyme community has been crying out for an accurate test and better treatment. The powers-that-be kept telling us how benign Lyme is, how great the Lyme diagnostic tests are and how easily the disease can be cured.”

As the CDC has not promoted any improvements in testing since 1994, many private laboratories have taken on the burden of research and development themselves.

One such private lab, IGeneX, has developed two new immunoblot tests capable of detecting multiple species of Borrelia (see below). The two tests are  approved for use in all states including New York. [Editor’s note: This paragraph was updated on March 19, 2019.]

What is the CDC-recommended test for Lyme disease?

The currently recommended Lyme diagnostic test was originally designed for surveillance (to track the spread) of a single species of bacteria—later named Borrelia burgdorferi B31—that was first detected in and around Lyme, Connecticut. That test was never intended to diagnose Borreliosis (infection caused by Borrelia) in other parts of the US or on other continents.

Today, we know there are over 300 strains of Borrelia worldwide. They are divided into two broad categories: Borrelia burgdorferi sensu lato (which causes Lyme disease), and Tick-borne Relapsing Fever Borrelia (which causes Lyme-like illness or TBRF). Let’s call these types A and B. The current Lyme test detects only a fraction of type A cases and gives anyone with type B a negative result.

As Dr. Jyotsna Shah, CEO of IGeneX explains, “With the increase of international travel, people may get infected in various parts of the US or abroad. Thus, it is important to have a test that can detect the infection no matter where it was acquired.”

Currently, the CDC recommends a two-step indirect method for Lyme testing, designed to detect the body’s immune response (antibodies) to infection. The first step uses an Indirect Immunofluorescent assay or an automated ELISA. These are fast and relatively inexpensive. Only if the first step is positive will the second step be performed. The second test, a Western Blot, is more inclusive but also more complex and subject to human error.

In a perfect world, all tests would be 100% sensitive and 100% specific, meaning not a single person with infection would go undetected and all uninfected persons would test negative. Think of HIV, where you want to be 100% certain that you do not misdiagnose a single case.

The whole topic of “sensitivity” and “specificity” is one we hear a lot about in relation to testing, but it’s one that many of us do not fully understand. For simplicity sake, I’ll use the example of an airport metal detector to explain the two-tier testing process.

First step should detect anything questionable

Like a metal detector, you want the first step to be highly sensitive, capable of detecting anything that is remotely questionable. Thus, even metal belt buckles and key chains will set off an alarm—even though they aren’t what the security agents are looking for.

If the detector senses anything suspect, the passenger is then subjected to a second, highly specific screening that involves a hand-held wand and closer examination to determine exactly what the object is.

The idea is that it’s better to take a second look at something that may turn out to be harmless—like a watch or a metal pen—then to let somebody board the airplane with a weapon.

Likewise, the ELISA (the first step) would ideally detect all suspected cases of Lyme. Unfortunately, with the standard test for Lyme, almost 30% of the people with Lyme disease and all the people with TBRF will test negative on the first step, and never be given the second confirmatory Western blot that is far more specific.

This is akin to setting airport metal detectors so that they only find big weapons, like machine guns, and anything smaller than that will sail through without notice.

How secure would you be with such a system?

Why Lyme disease is so difficult to diagnose

Adding to the difficulty of diagnosis, Lyme disease is known as a “great imitator,” because it can infect every system of the body causing a myriad of symptoms that mimic illness such as Arthritis, ALS, Chronic Fatigue Syndrome (CFS), Fibromyalgia, Lupus, Multiple Sclerosis (MS) or Myalgic Encephalomyelitis (ME).

“The Lyme ImmunoBlot is intentionally more inclusive for Borrelia burgdorferi sensu lato than the currently available Western blots because we now know that other species such as B. mayonii, B. californiensis and B. spielmanii all cause disease in the US,” said Dr. Shah.

High Accuracy Across the Disease Spectrum

The accuracy of the Lyme ImmunoBlot and TBRF ImmunoBlot have been established by exhaustive testing. The sensitivity with well-characterized samples have been shown to be greater than 90%, whereas the two-tier testing recommended by CDC has a sensitivity of about 55%.

And this high degree of sensitivity does not come at the cost of specificity. IGeneX has done this by: 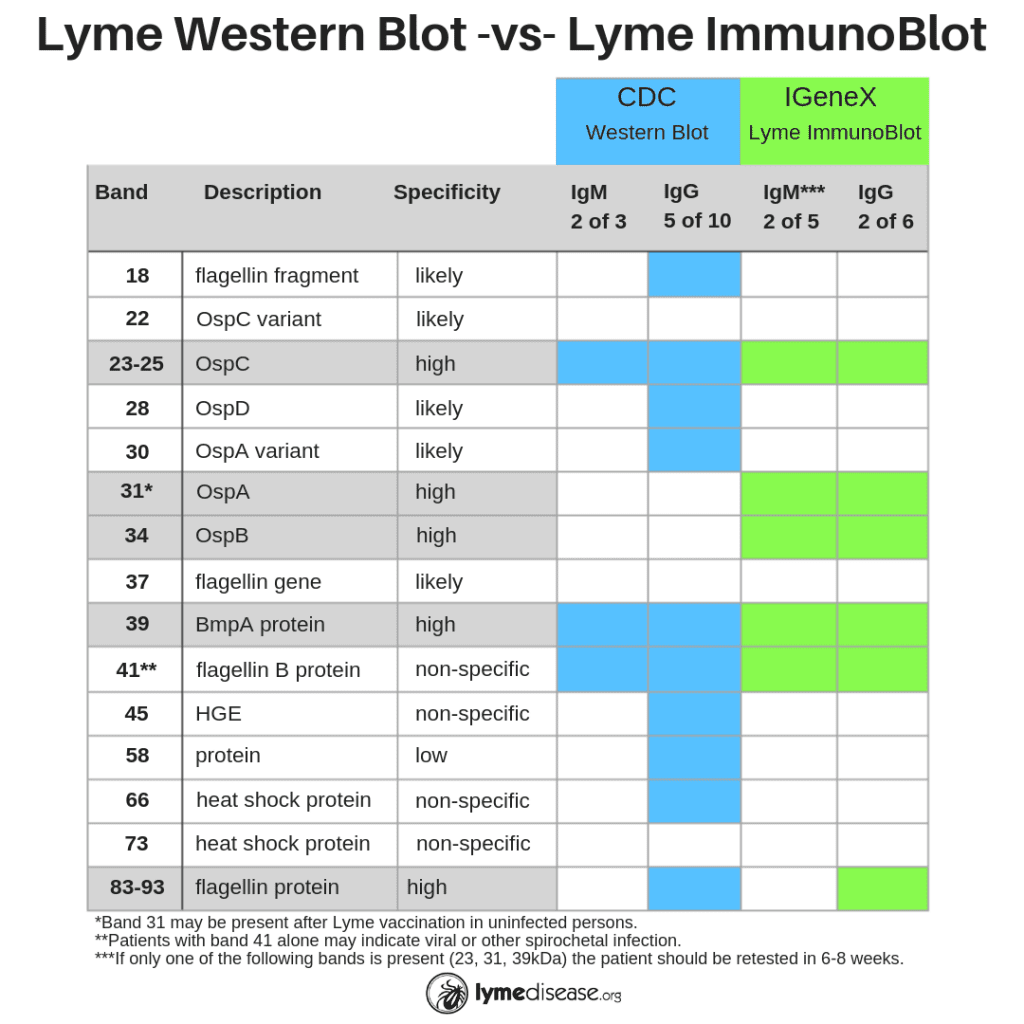 Additionally, the ImmunoBlots detect the full spectrum of the disease: early, active and late-stage disease. This high degree of sensitivity does not come at the cost of specificity, with the ImmunoBlots showing 99 and 97% and 95 and 97.5% specificity for Lyme and TBRF IgM and IgG respectively.

As FDA, CDC & NIH researchers are finally acknowledging, newer approaches to testing that have been effectively applied to other emerging infectious diseases show promise in the detection of Borrelia infections.

The lead author of the IDSA paper, Steven Schutzer, a physician-scientist at Rutgers New Jersey Medical School states, ”It will not be surprising to see direct tests for Lyme disease join the growing list of FDA-approved direct tests for other bacterial, fungal and viral infections that include Staphylococcus, Streptococcus, Candida, influenza, HIV, herpes and hepatitis, among others.”

The Lyme community has been waiting decades for these improvements and will applaud when these Lyme diagnostic tests become the standard of care for all patients.