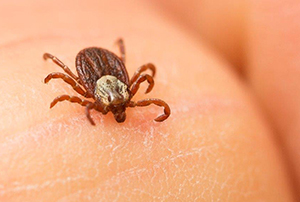 Researchers report that tick paralysis, a bacterial infection carried by many different ticks, can be found throughout Pacific Northwest.

PULLMAN, Wash. – Warming weather in the Pacific Northwest brings with it a renewed threat of tick paralysis in animals and people.

Tick paralysis is a somewhat uncommon but potentially fatal disease that can affect virtually all warm-blooded land animals. The illness occurs when certain species of ticks inject potent toxins from their salivary glands into the host animal.

The disease was first identified in Australia in 1824. Since then, more than 60 species of ticks worldwide have been identified as toxin producers.

At least two prominent species of ticks on the list of toxin producers are native to North America, including the Pacific Northwest.  In fact, in North America, ticks actually transmit more disease than mosquitoes. Tick paralysis occurs most in the northwestern and southeastern regions of North America along with the east coast of Australia and southern Africa.

“Both human and veterinary medical professionals know tick paralysis can be a serious, potentially fatal illness,” explained Steve Parish, a large animal veterinarian who heads up Washington State University’s Agricultural Animal Service. “Llamas and alpacas seem to be particularly susceptible to the effects of the toxin and we don’t know why.”

Each spring and summer, WSU’s veterinary teaching hospital sees or provides consultation on several cases of tick paralysis in llamas and alpacas.

The cases come from throughout the Northwest. Occurrence of the disease is sporadic and is difficult to predict because the toxin does not occur in all tick populations all of the time or in the same local regions. And only female ticks attach firmly and engorge on blood from the hosts.

“Symptoms of tick paralysis include a rapidly progressing total paralysis over 24 to 72 hours after the ticks attach themselves to the animal,” said Parish. “Untreated, an animal may be unable to chew, swallow, drink or breathe as the paralysis progresses to the respiratory system. Obviously, if the breathing mechanism is paralyzed, the animal dies.”

Death rates for tick paralysis have been reported as high as 10 percent or more in humans and around 7 percent in domestic animals. Medical literature shows that in most human cases of the disease, only a single tick was found on the patient.

“As dire as this disease sounds, though, treatment is effective and reversal of the paralysis can be rapid with an excellent prognosis,” said Parish. “The key is to remove the ticks and provide supportive care.

“Recovery occurs very quickly in most animals and people within 48 hours, but llamas and alpacas seem to be hit a harder than other animals for reasons not well understood,” he said. ”Complete recovery could take up to several weeks in those species.”

Removing all ticks may require that an animal be shorn in addition to administering medication that kills any ticks still attached.

“Llama and alpaca owners working with their veterinarian will find the drug ivermectin to be very effective when used in the proper dosage,” said Parish.  “In addition to tick removal and ivermectin, it may also be necessary to use external chemical insecticides such as the pyrethrins. Certainly, tick repellants can help prevent ticks from attaching.”

“Ticks are best removed with curved tweezers, forceps or gloved fingers,” said Parish. The tick should be grasped close to the skin and pulled with steady but gentle traction to ensure all the mouth parts come off with the entire tick.

Other methods of tick removal famous as folklore, such as applying a lighted match or petroleum jelly to the tick, are not effective.

“After removing a tick, people should always wash their hands thoroughly with soap and water,” Parish said.