TOUCHED BY LYME: Lyme disease on the Appalachian Trail 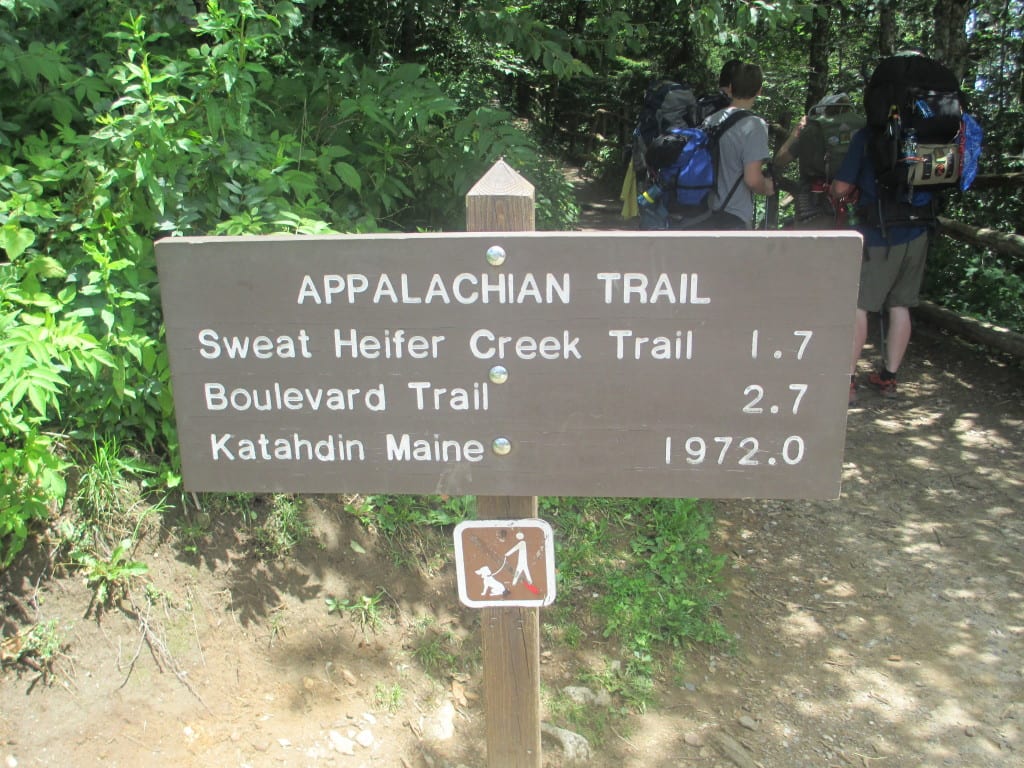 Guest blogger Karl Ford collected infected ticks while hiking the Appalachian Trail, but kept himself tick-free. “I wore permethrin-treated bug-net pants, a treated long-sleeved shirt and hat and had no ticks on my body at any time during the 140-day hike.”

Don’t know much about Lyme disease? Maybe you have learned some about Lyme disease but still want to hike the Appalachian Trail (AT) and don’t want to get Lyme disease? Each year between 2-3 million people hike the AT and risk contact with infected ticks. Not bears, not snakes, not injury, but tick-borne illness is probably the greatest hazard of hiking the AT.

I am a scientist who performed a tick surveillance study while thru-hiking the AT in 2013.   If you read this article carefully, print it, carry it with you, and practice its recommendations faithfully, you are much more likely to avoid ticks and have a safe hike!

Various diseases are transmitted by ticks present on the AT, including the most common and most serious, Lyme disease. About 300,000 cases of Lyme disease are estimated annually by the Centers for Disease Control, with high incidence in the mid-Atlantic and New England states of Pennsylvania, Maryland, New Jersey, New York, Connecticut, Massachusetts, Vermont, New Hampshire, and Maine.  The CDC maintains anonline map.

The disease is transmitted via the bite of the deer tick Ixodes scapularis which occurs in northern deciduous forests of the Appalachians and other areas. The actual bacteria that causes Lyme disease is Borrelia burgdorferi. Lyme disease not only causes a flu-like illness, but can cause a poorly understood, longer-term, debilitating, chronic Lyme disease syndrome in 10-20% of treated cases. 60% of untreated cases can result in significant joint swelling and arthritis, and a smaller percent experience neurological problems. Lyme disease is a significant health risk to uninformed and ill-prepared hikers.  The Lyme disease bacterium generally is killed by antibiotics and most physicians in Lyme endemic states will prescribe antibiotics without lab confirmation to hikers.  Babesiosis and human anaplasmosis are two other less common pathogens associated with deer ticks.

Incidentally, while Lyme disease is vastly more common, other tick-borne pathogens are known to occur along the AT. The lone star tick Ambylomma americanum and the American dog tick Dermacentor variabilisare vectors of much less common ehrlichiosis, spotted fever rickettsia diseases, but not Lyme disease. These ticks are more prevalent is the southern states and tend to be found more in herbaceous areas. The lone star tick can also cause a red meat allergy. These ticks tend to be common from Georgia through Massachusetts, but if you hike Georgia, North Carolina and Tennessee in March-mid-May, you will see few, if any, ticks due to cold weather and high elevations.

Juvenile (nymph) stages cause the large proportion of Lyme disease cases and are so small (the size of a poppy seed) that even when attached, they are often not noticed except by careful skin checks. Ticks do not jump or fly; they quest for hosts from vegetation usually less than a meter in height. When you brush against the vegetation, they hitch a ride aboard.

There are approximately 286 primitive three-sided camping shelters on the AT. The shelters are often infested with mice and other rodents, reservoirs for deer ticks and the Lyme disease bacterium B. burgdorferi. Because so many hikers congregate and sleep in the shelters and because of the mice infestations, I studied whether shelters and tenting areas present any greater risk of contacting ticks than hiking the Trail.

With National Park Service approval, I sampled forty-two shelter areas along the entire AT in a south to north transect using a stratified random sample. I collected both adult and nymphal ticks, including A. Americanum, D. variabilis, and I. scapularis. Pathogens detected by the laboratory included rickettsiae, erlicichiae, and B. burgdorferi.

Despite sampling multiple times in each state, no ticks were collected from GA, NC, TN, MD, CT, VT, NH and ME. While sampling occurred from mid-April until September, ticks were only collected between May 29 and July 21; other dates failed to collect ticks.  Ticks became common as I hiked the AT from central Virginia to Massachusetts through mid-July. This is the time and location to be most alert. Elevation-wise, ticks are most abundant at <2000’. Not coincidentally, much of the AT from Maryland north through Massachusetts is <2000’ so is higher risk. While Vermont, New Hampshire and Maine also have a high incidence of Lyme disease, it is believed that most cases are attributed to densely populated lower elevations. Most of the AT terrain in these states is >2000’, so is lower risk.

Although ticks from my study were only sampled between May and July and were not found in all states along the AT, ticks are prevalent in lower elevations of all 14 AT states from May through September (and even year-round at very low elevations). I met at least 10 hikers who had had been treated for Lyme disease while hiking the AT. Estimates from hiker surveys suggest 5-9% of thru-hikers are treated for Lyme disease. (Actual laboratory confirmation of Lyme disease is not very reliable[1] ).

The single most important thing you can do to protect yourself is to wear permethrin-treated clothing. I also recommend you treat your pack and outer tent floor with spray-on permethrin. Permethrin binds tightly to clothing and is safe for humans, but is highly repellant of ticks, spiders and insects. I wore permethrin-treated bug-net pants, a treated long-sleeved shirt and hat and had no ticks on my body at anytime during the 140-day hike. My hiking friends had many. I liked the pants because they fitted snugly at the ankle and ventilated extremely well. A very few hikers tuck their long pant-legs into their socks which, while effective, is too uncomfortable in hot summer conditions. For hands and face, you can use 20-30% DEET in exposed skin, but it is toxic, so use it sparingly and not on small children.

The second most important prevention tool is the daily (or more frequent) tick check, but it is but hard to accomplish on the trail. Juvenile (nymph) stages are so small they are often not noticed except by careful skin checks. Tick checks are very important but hard to accomplish on the trail. I tried hand mirrors, but found them inadequate. Using the hands, one can feel an attached tick, even in areas one can’t see. I enlisted a buddy to check my back. You have to make this a priority. Ticks may initially hitch onto the legs, but tend to climb upward and may even eventually reach the scalp. Attached ticks should be removed immediately by gripping with tweezers behind the head and pulling slowly. Then, the affected area should then be washed with soap and water and sanitizer. Hikers should be able to identify deer ticks, know symptoms of Lyme disease (flu-like symptoms with or without a rash) and seek treatment immediately if any symptoms appear. Although I don’t necessarily recommend it, because I was actively collecting ticks, I carried doxycycline under prescription in case I developed symptoms or had an attached deer tick. Fortunately, I never needed it!

Tick exposure can be reduced by regular trail, field, power line, and shelter area trimming and by sweeping shelters out prior to sleeping. State Appalachian Trail Conservancy clubs do this work on a volunteer basis and it is most appreciated!

Watch Where you Sit and Sleep

I think tarps offer little protection from night-questing ticks, especially nymphs that inhabit leaf litter. Because of dense underbrush that harbors ticks, hike the center of the trail and avoid hiking off-trail, such as in collecting firewood. Don’t sit on the ground or on logs. I rested in shelters or at picnic tables. I also treated a closed-cell sit pad with permethrin.

From this article, know when and where ticks are most abundant and be most vigilant then.  Hikers should be able to identify deer ticks, and know symptoms of Lyme disease (see: Centers for Disease Control or theLyme Disease Association). Seek treatment immediately if any symptoms (flu-like symptoms with or without rash) of Lyme disease appear.

Lyme disease is a serious consequence to the unprepared, hence is too common. Most hikers I met on the trail experienced attached ticks, or ticks crawling on their bodies or clothes, and more than a few were treated for Lyme disease or quit the trail because they did not follow these precautions. The actual number of Lyme disease cases among AT hikers is unknown, but the disease is mostly preventable. There would be fewer cases of Lyme and other tick-borne disease if every AT hiker followed the recommendations listed above. You are more likely to have a safer and more enjoyable hike if these precautions are followed. Spread the word to your hiking friends.

Karl Ford (whose trail name is “Speed”) is a retired Department of Interior scientist who conducted tick research while through-hiking the AT in 2013. His work was conducted under NPS research permits and collaborated with other nationally recognized tick ecology experts. He has a tick prevention article accepted for AT Journeys, the magazine of the Appalachian Trail Conservancy. He holds a Ph.D. in environmental health science, has been university faculty, and practiced environmental toxicology and ecological planning throughout his career. He can be reached at earthford@aol.com.

[1]Scientists consider this important because of controversy of whether “cases” are truly LD. Because the tests have many false negatives, there is argument as to whether they are cases or not. Click here and here for examples.

This blog was originally published on the website distancehiking.com.