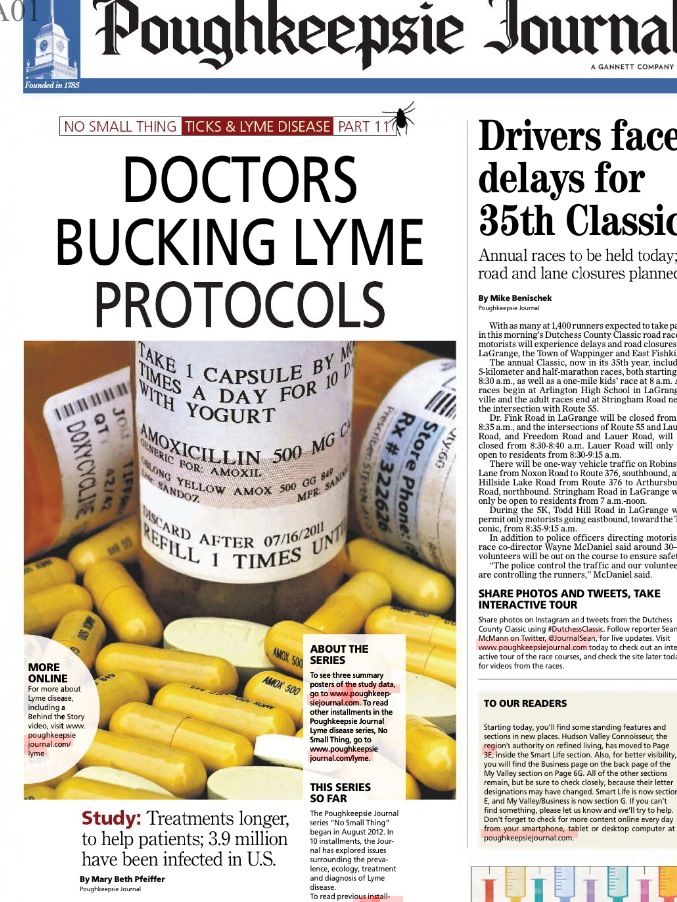 The CDC thinks that’s a problem that needs to be fixed.

I was reading the latest Poughkeepsie Journal article by Mary Beth Pfeiffer, “Doctors bucking Lyme Protocols.” This is the latest in her remarkable series of investigative reports on Lyme disease. After reviewing abstracts of the three studies the CDC relied on to revise the case numbers up from 30,000 to 300,000, she makes this conclusion about the treatment durations used by a random sample of patients throughout the United States: “Just 39 percent of Lyme patients reported being treated within the [IDSA] guidelines, or for four weeks or less. Fully 56 percent were treated longer, while 5 percent said they were not treated at all.” That’s astonishing. I should point out that this survey was random—it was not stacked with the patients of ILADS physicians, it was random. With all of its market clout and with the weight of the CDC behind it, the IDSA still can’t convince physicians to follow its rigid treatment guidelines.  What does that mean for patients, physicians, the CDC, the IDSA, and ILADS?

Well, for starters, let’s see what the CDC and IDSA have to say about this. Paul Mead of the CDC says: “These findings confirm that health care providers are not rigidly following the IDSA guidelines.” OK, well that is obvious and we all agree. Then he adds that the findings “underscore the need for more education of providers regarding best treatment practices.”  Really? So he thinks that the problem is that physicians haven’t read the guidelines and need education?  I find that hard to swallow. The CDC posts a link to the IDSA guidelines on its website. Uptodate, a widely followed web-based service for the physicians “who don’t know” about a disease, virtually parrots the IDSA guidelines. And, of course, insurance guidelines do the same.  So, IDSA Lyme guidelines are easy to find, difficult to misunderstand.  Four weeks therapy max, no more.  Period.

The IDSA says, “The use of long-term antibiotic therapy does not reflect best practices and may be a result of inaccurate information.”  To me, this sounds like the IDSA is saying its practices are “best.” That’s not remarkable. Ford thinks its cars are best, right?  (If we were dealing with tons of evidence this might be different. But in Lyme, there are a handful of small studies with mixed results. The weight of these guidelines is based on opinion.) And, at least for patients, the essential debate is about what is “best” for the patient.  The IDSA then characterizes those doctors who don’t follow their guidelines as ill-informed. Again, I think this is extremely unlikely.

This also seems like déjà vu to me.  Drs. Macauda and colleagues (including Yale’s Dr. Peter Krause) conducted a survey of residents in the New England area and found: “The majority of our survey respondents believe that the Lyme disease spirochete can persist following antibiotic treatment, that a standard course of treatment for 2 to 4 weeks is often not curative, and that long-term antibiotic therapy of >2 months is sometimes useful.” The authors of the study recommend that state and federal agencies increase efforts to educate the public to curtail the “widespread belief in chronic Lyme”.  (One year after this study was published, the Embers study was published which demonstrated persistence in monkeys after treatment.)

So, now it looks like both patients and physicians believe that the IDSA guidelines are wrong. And the CDC and IDSA researchers believe the problem is pure and simple ignorance. Is it even possible that there is another explanation? Can patients who live with the disease and the community physicians who treat them know something that the IDSA researchers who sat on the IDSA guidelines panel don’t know?  Maybe this is part of what the Institute of Medicine is getting at in its new guidelines on creating trustworthy guidelines—which now require that guideline panels going forward include clinicians and others “expected to be affected” by the guidelines. (Recall that the IDSA panel consisted solely of researchers.)

Maybe we have entered the realm of “practice-based evidence”—where what matters is whether it actually works in clinical practice.  Physicians and patients are telling the CDC and the IDSA that the IDSA guidelines don’t work.

LYME POLICY WONK blog is written by Lorraine Johnson, JD, MBA, who is the Chief Executive Officer of LymeDisease.org, formerly CALDA. Contact her at lbjohnson@lymedisease.org.