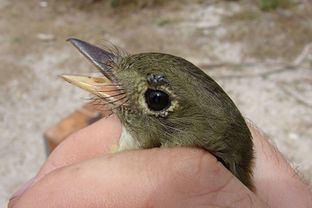 In her disease ecology lab in College Station, Sarah Hamer, peering through a microscope, examines the newest addition to her expansive vector collection — an exotic tick the size of a poppy seed, typically only found in Central and South America.

How it made its way to Texas — thousands of miles from home — and whether it has the potential to transport tick-borne diseases that would affect human and animal health in the United States are questions Hamer and a team of researchers are determined to answer.

“They are attaching to these migratory birds during the winter in the Neotropics, and stay attached up to a week,” said Hamer, assistant professor at the College of Veterinary Medicine and Biomedical Sciences at Texas A&M; University. She identified the ticks in a recent bird banding study on a stretch of the Texas coast.

“We are not the first people to document this, but here we are using a sample size much greater, on a large, standardized effort, to estimate the number moving in.”

The study, organized by the university and the Migratory Bird Center at the Smithsonian Conservation Biology Institute, estimates that between 4 million and 39 million neotropical ticks are hitching rides behind the ears and around the eyes and necks of small, migratory songbirds each year.

The ticks fall off the birds once they’ve reached the United States, where they probably die due to colder temperatures and a lack of hosts to feed on, experts say — likely the reason they have not yet established in the country. That could change as temperatures warm, some scientists say.

Their hosts, the songbirds, noted for singing melodies and weighing between 10 grams and 20 grams, have been migrating north for millennia from Central and South America, traveling as far north as Canada and Alaska.

Before heading farther north, the birds stop for rest after a 12- to 24-hour, nonstop journey across the Gulf of Mexico, landing at the Clive Runnells Mad Island Marsh Preserve in Texas’ Matagorda County.

Researchers involved in the bird banding study examined 3,844 birds in the landing area after catching them with mist nets — fine and almost see-through — over two spring seasons in 2013 and 2014.

They searched them for ticks, took blood samples and placed tiny banding bracelets on their legs before setting them free. The bands are stamped with a unique identification number, which is recorded in the U.S. Geological Survey, where birds have been tracked since 1914, said Emily Cohen, the study’s lead author and a postdoctoral fellow at the Smithsonian Migratory Bird Center.

Experts say further studies, like the bird banding one that tracks environmental changes, are necessary to fully understand whether a future establishment is possible. Many say such studies are more important than ever with the expanding tick population across the United States, most notably, the lone star tick, an aggressive tick that bites humans.

Could climate change come into play? Experts are uncertain at this point.  The lone star tick population, found in eastern, southeastern and south-central states, has expanded northward to Maine and as far west as central Texas and Oklahoma over the past 20 to 30 years, according to the Centers for Disease Control and Prevention. The adult female is noted for a single white dot on the middle of its back.

“It’s expanding right now, stretching its range entering the northeast,” Richard Ostfeld, a disease ecologist at the Cary Institute of Ecosystem Studies in Millbrook, New York, said of the tick population. “Whether that has to do with climate change is not super well worked out, but there is at least circumstantial evidence that warming is making more northern areas suitable for the lone star tick.”

The expansion is likely due to deforestation and increased numbers of the white-tailed deer, the lone star tick’s primary host, said Dr. Christopher Paddock, a pathologist at the CDC. He said climate likely also plays a role in expanding tick populations, even beyond the lone star tick, which is not one of the neotropical ticks.

The lone star tick is “the most common human-biting tick in the southeastern U.S.,” Paddock said. It can cause the Heartland virus and human ehrlichiosis, both of which can be moderately-severe to life-threatening for humans, he said.  Paddock says the vast majority of tick bites that occur in the United States each year are not associated with subsequent infection. And experts say that the majority of ticks do not feed on humans.

“A very small, miniscule population of tick species are ‘generalists’ and bite people,” said Durland Fish, a retired professor of microbial diseases and forestry and environmental studies at Yale University’s school of public health. “From that alone, I wouldn’t expect ticks from birds coming up from the Neotropics being any concern.”

Ticks fall under two feeding categories: generalists, feeding on a wide range of hosts, and host-specific — like the neotropical tick — which feeds on songbirds in its beginning life stages, and moves in its adult stage to a species of porcupines not found in the United States.  Some experts say that even host-specific ticks, like the neotropical, could possibly adapt to their surroundings.

“If they get transported long distances and then appear on a far away place with a different host community, it’s still possible that they may find certain hosts that would be suitable for them,” said Otsfeld. “It’s an open question, but we do have a porcupine in North America.”

But some scientists are skeptical. Even if the neotropical ticks did manage to find a new host, many experts say it is still unlikely they would establish themselves in the United States. Many conditions come into play.

“If all the stars line up and this tick is able to find a host and able to make it through the winter and lay its eggs and all those tricky things involved in tick survival, it could establish,” said Bruce Noden, assistant professor of entomology and plant pathology at Oklahoma State University. “If you did all the probabilities, it could be quite low.”

Hamer and her team will continue studying native Texas wildlife such as rodents, raccoons and possums for tick-borne diseases and look for small populations of the exotic ticks to try to determine whether they can adapt to their new environment.  “If it’s warm and it’s got blood pumping, the tick might be quite happy with it,” Hamer said.

Disclosure: Texas A&M University is a corporate sponsor of The Texas Tribune.  The Texas Tribune is a nonpartisan, nonprofit media organization that informs Texans — and engages with them – about public policy, politics, government and statewide issues.