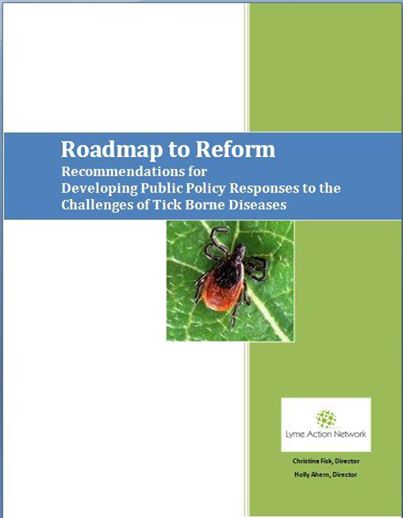 Lyme disease is often described as a controversial topic fraught with professional disagreement. But, generally speaking, very few people actually understand why this subject has acquired this reputation.

“Lyme disease is at epidemic proportions in New York State”, advised Christina Fisk, President of the Lyme Action Network. “We are asking state policy-makers to work with the Lyme organizations in this state in the development of a comprehensive plan to address the multitude of difficult issues, including significant misinformation and misunderstanding, that are all part of the Lyme disease problem in New York. Because it is a complex issue, the Lyme Action Network has authored a clear and substantial informational report on the subject and has suggested a twelve point legislative agenda to begin to address this serious issue now before things get worse.”

The Roadmap to Reform is a comprehensive compendium of evidence-based information that is critical to a complete understanding of the issues central to Lyme and other tick borne diseases.

“With this Roadmap,” said Fisk, “elected representatives and governmental policy-makers have access to an overview of all the intertwining issues of Lyme and tick-borne disease, and can then pursue an informed and unbiased course to create the best public policy possible for the sake of the victims, their families, and their communities.”

Endorsed by other New York State Lyme support organizations and advocacy groups, this document has been presented to the New York State Senate Task Force on Lyme and Tick Borne Diseases as well as to other legislators.

“In addition to exploring and explaining the challenges faced by the victims of Lyme disease”, said Ms. Fisk, “the Roadmap to Reform’s twelve recommendations for legislation could help put this troubling issue on the path to resolution. Doing nothing, or relying on simplistic band-aid types of responses to the issues will only result in thousands of new victims.”

Some of the recommendations in the report include:
1. Revision of the highly inaccurate “two-tier” testing system (blood tests).
2. Mandated advising of patients about the accuracy rate of the blood tests.
3. Mandating full test results in reports from laboratories
4. Regular and updated professional training on current best practices regardless of professional affiliations.
5. Establishment of legislative prohibitions against the influences of special interests and professional conflicts that may negatively impact patients’ rights and medical care
6. Protection of the physicians who treat outside the IDSA (Infectious Diseases Society of America) guidelines from unwarranted harassment, investigation, and intimidation.
7. Public hearings to hear from those affected by the disease and the State’s policies.
8. Investment in research to control the ticks.

Click here to read the entire “Roadmap to Reform.”