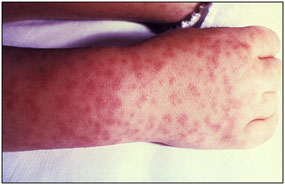 A middle-aged man died of Rocky Mountain Spotted Fever in Imperial County this week. The illness is typically transmitted by brown dog ticks.

IMPERIAL COUNTY – The Imperial County Heath Officer, Dr. Stephen Munday, announced today that a middle-aged resident of Imperial County passed away this week due to Rocky Mountain spotted fever (RMSF), a tickborne disease.  The individual visited a local hospital in May after feeling ill with fever, nausea and vomiting but was unable to recover.  Public health officials continue to investigate the death and it is unknown where the individual contracted the disease.  Monitoring and testing of ticks around the individual’s home and property is being conducted.  This is the first case and death due to RMSF reported in Imperial County.

“This local death in our community is an unfortunate case,” stated Dr. Munday. “It is a sad reminder of the seriousness of tickborne illnesses and the importance of prevention and treatment.  Avoiding tick bites is the best way to avoid getting diseases such Rocky Mountain spotted fever, Lyme disease and other tickborne infections.”

Ticks are small, insect-like creatures that feed on blood by biting and attaching to animals and humans.  There are many different kinds of ticks in California, but only six kinds are known to commonly bite humans.   Sometimes these ticks carry germs like bacteria or viruses that can be transmitted to a person while the tick is attached.

Rocky Mountain spotted fever (RMSF) is caused by the bacterium Rickettsia rickettsii and is a cause of potentially fatal human illness in North and South America.  The brown dog tick has been identified as a reservoir of R. rickettsii, causing http://www.cdc.gov/rmsf/, in the southwestern United States and along the U.S-Mexico border. Dogs are the primary host for the brown dog tick for each of its life stages, although the tick may also bite humans or other mammals.  In the American Southwest, RMSF cases have been identified in an area where the disease had not been previously seen. The brown dog tick is found on dogs and around people’s homes. Almost all of the cases occurred within communities with a large number of free-roaming dogs.

It’s important that individuals remember that diseases like Rocky Mountain spotted fever are caused by ticks, not by dogs.  If a dog has ticks and becomes ill, it is the ticks that have caused the disease and the dog cannot spread the disease to individuals.  While it is a good idea to use preventive measures year-round, individuals should be extra careful in the warmer months (April-September) when ticks are most active.  If you are going to be in a tick-infested area, use repellents that contain at least 20% DEET (N, N-diethyl-m-toluamide) on exposed skin and clothing for protection that lasts up to several hours. Always follow product instructions. Parents should apply this product to their children, avoiding hands, eyes, and mouth.  Persons exposed to tick-infested habitats should do a careful inspection and remove crawling or attached ticks.  For added protection, wear long sleeves, pants and light-colored clothing that allows you to see ticks that are crawling on your clothing.

Dogs are very susceptible to tick bites and tickborne diseases.   Individuals can take steps to control ticks on their property and on their pets. It’s important to use a tick preventive product on dogs because vaccines are not available for all tickborne diseases that can affect your pet.  A variety of products are available such as shampoos and drops that can be applied on the dog’s skin to protect your pet.  To reduce the chances that a tick will transmit disease to you or your pets:

If you find ticks in your yard or on you or your pets after being outside, your yard should be treated to reduce or eliminate the ticks.  Pesticides are available at hardware and home improvement stores for treatment of outdoor areas.  It is very important to always follow product application instructions.  Licensed pest control operators also have the appropriate products to treat areas for ticks and other pests safely.