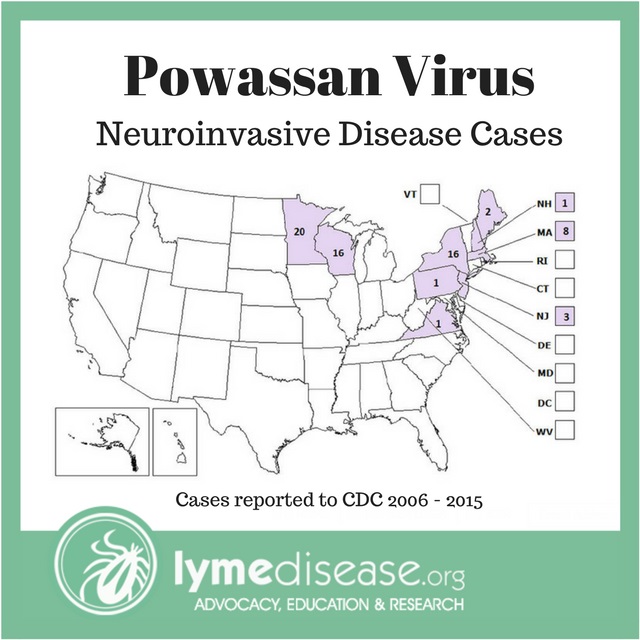 A resident of New York State has died from Powassan virus, a disease spread by infected ticks. It is the first known Powassan-related fatality in the state this year.

Health officials did not identify the person. However, a family friend told the Daily Freeman newspaper that it was a woman who was bitten more than a month ago and that she died July 28.

I just got home from vacation in Cape May, NJ, to discover that the first case of Powassan encephalitis has killed a Hudson Valley, NY resident.

Although the article states that the risk of getting Powassan virus (POWV) is low, since only 0-6 cases are diagnosed each year, it should also be stated that the percentage of individuals exposed to POWV is much, much higher.

How much higher? Two studies done by Constance Knox in the past several years that were published in the peer reviewed medical literature have shown that those living in highly endemic areas for Lyme disease, like Wisconsin or NY where this individual lived, had between a 10-16% exposure rate to the Powassan virus!

Fortunately, very few of those cases went on to an invasive neurological disease. What are the primary symptoms to watch for?

The incubation period is >1 week (range from 8-34 days) and can result in fever, muscle weakness, confusion, headache, nausea, vomiting, and a stiff neck. These are the usual presentations.

Severe signs and symptoms include respiratory distress, tremors, seizures, a gait unbalance, confusion, paralysis, and coma. If the virus becomes neuroinvasive with a meningoencephalitis, then 10% of those cases are fatal with long-term neurologic sequelae in 50% of those affected.

Tick prevention is always a good idea and absolutely essential at this time of the year. The virus can be transmitted within 15 minutes of a tick bite, there is no cure, and there are many unknowns regarding whether those exposed may still harbor the virus.

Other flavivirus infections like West Nile CAN persist in the body, and some tick-borne viruses like the Tick-borne Encephalitis virus (TBEV) in Europe, which is similar to the POWV, can be transmitted by unpasteurized dairy products from goats, cows and sheep. We still have to answer these important questions regarding persistence and food-borne modes of transmission.

I served on the federal Tick-Borne Disease Working Group in 2017-18 and was co-chair of the  “Other Tick-borne Infections and Co-infections subcommittee.” Our 2018 report has a good overview of Powassan virus.

I have also been chosen to serve on the newly constituted “Babesia and Other Tick-borne Viruses subcommittee,” so we will be addressing the Deer Tick Virus and other tick-borne viruses in the future.

Dr. Richard Horowitz treats Lyme disease at the Hudson Valley Healing Arts Center, in Hyde Park, NY. This article originally ran on his Facebook page, with the following disclaimer: The views expressed are those of Dr Richard Horowitz, and do not represent the views of the Tick-Borne Disease Working Group, HHS or the United States.