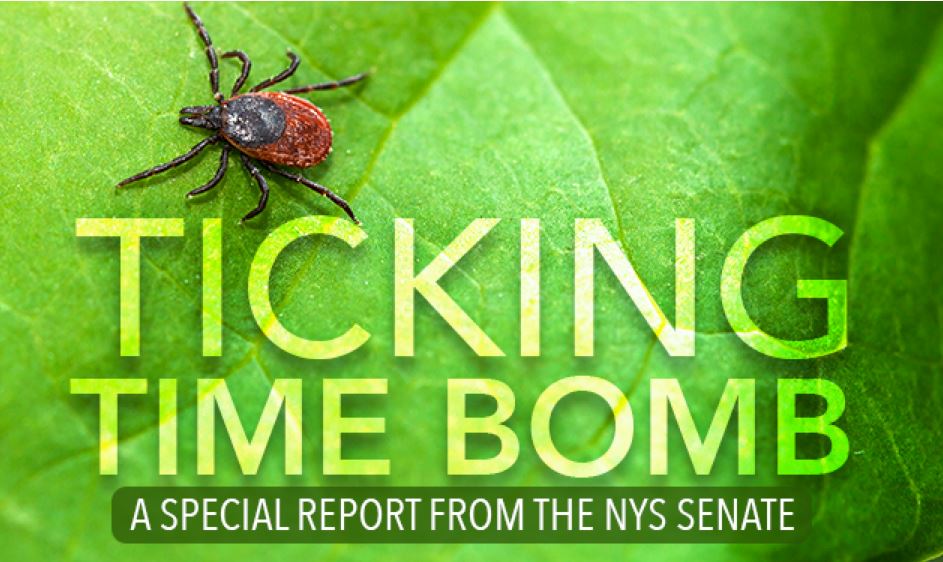 From the New York State Senate

ALBANY, NY – Senator Sue Serino (Hyde Park) and Senator Kemp Hannon (Nassau) today released a comprehensive report aimed at combating the spread of Lyme and tick-borne diseases (TBDs) in the state. Based on the findings presented at a public hearing convened by the senators, the report highlights the immediate need for a statewide action plan, as well as a legislative commitment to empowering patients and funding critically necessary research to reduce the tick population.

Senator Sue Serino, Chair of the Task Force on Lyme and Tick-Borne Diseases, said, “With yet another Powassan virus diagnosis in the state—this time in Dutchess County—and countless New Yorkers suffering from Lyme and other tick-borne diseases, it is imperative that the state makes combatting these devastating diseases a top priority. While progress has been made since the formation of the Task Force, this report provides a much needed road map to take our work to the next level, and I implore the Governor and our colleagues in both houses to join us in the fight to take control of this public health crisis.”

Senator Kemp Hannon, Chair of the Senate Standing Committee on Health, said, “With New York sitting at the epicenter of the tick-borne disease epidemic we have a duty to engage partners at every level to act swiftly and efficiently to improve outcomes for the thousands of patients suffering around the state. Armed with the information gleaned from the hearing, we have put together a comprehensive strategy that can help inform the Department of Health as they develop a critically necessary statewide action plan. We stand ready to work with them—and our colleagues in the Legislature—to see that our recommendations become a reality.”

As tick-borne disease rates increase across the state, it is clear that New York is facing a direct threat that requires a significant investment to improve identification techniques, reporting and treatment options.

Testimony provided by patients at the hearing painted a grave picture of life with a tick-borne illness. Patients described agonizing pain, dangerous loss of memory and motor skills, financial ruin as a result of a severe lack of effective treatment options, and more. A common theme that ran throughout patient testimony was the rampant inaccuracies plaguing the test currently used to detect TBDs, with some suffering with symptoms for years before an accurate diagnosis and treatment.

To address this point, the report includes a recommendation for the state to create specific protocol when it comes to notifying individuals of their diagnoses. Senators Hannon and Serino have introduced legislation that would require the state to develop that specific protocol to guide providers in properly diagnosing and treating Lyme and TBDs and require them to provide patients with a notification form to better educate them about their test results.

It is commonly accepted that Lyme disease can be effectively treated with antibiotics if detected early. However, as was discussed by many hearing witnesses, the test used to detect Lyme disease is simply not reliable. Too often patients are led to believe that they are in the clear after receiving a ‘negative’ serology test for Lyme disease, which ultimately delays critical treatment resulting in worsening— sometimes irreversible—symptoms. The bill (S.6926) would arm patients with the information they need to more effectively advocate for themselves and receive swift, effective treatment.

Click below to watch the August hearing in its entirety.