NEWS: The battle over Lyme in the South 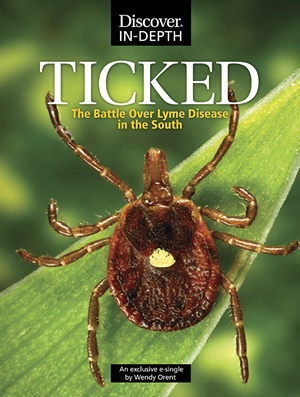 TICKED is the second installment of Discover In-Depth, a new longform e-single series from Discover magazine.

From a Discover magazine press release:

As national awareness and confirmed diagnoses of Lyme disease grows, Discover magazine is releasing a sustained, deep investigation of the science and politics surrounding the disease. TICKED: The Battle Over Lyme in the South is the result of a three-year investigation of the controversy over Lyme disease diagnosis in the Southern United States, where the Centers for Disease Control and Prevention (CDC) do not recognize the disease — but a growing number of scientists and physicians do.

Thousands of people in the South have reported Lyme-like symptoms and debilitating illness after exposure to ticks. If left untreated, Lyme disease can result in devastating neurological and cardiac complications and difficult-to-treat pain and fatigue. Earlier this year, the CDC announced that Lyme disease was ten times more prevalent than previously reported, with as many as 300,000 sufferers across the U.S. But not all suspected Lyme cases and regions are accounted for. The CDC recognizes the disease in the Northeast and the Mid-Atlantic States, in the Midwest, and even in California and Oregon, but not in the Southern U.S., where the controversy over Lyme disease has reached a fever pitch.

While patients elsewhere are far more likely to get diagnosed and treated in the early stages of the disease, sufferers of possible tick-borne illnesses in the South are left guessing at what is wrong and how to treat it. The issue is critical not only because of all of the unexplained illnesses in the South, but also because new tick-borne bacteria could be agents of disease nation- and worldwide.

TICKED examines the complex ecology of the Southern states, including a host of ticks that some researchers contend may be spreading a Lyme-like disease, if not Lyme itself. The story also dives into the fierce debate now brewing between scientists over how tick-borne illness is transmitted, detected and defined.

TICKED is the second installment of Discover In-Depth, a new longform e-single series from Discover magazine. It is available at www.DiscoverMagazine.com/In-Depth, via the Discover app and on Amazon, for $1.99.

About Wendy Orent:
Wendy Orent, Ph.D., is an anthropologist based in Atlanta who writes about nasty diseases, whether they’re natural outbreaks or biological weapons threats. Orent’s favorite preoccupation is the evolution of infectious disease and understanding how animal diseases evolve to become human threats. A teacher of science journalism at Emory University, she is author of Plague: The Mysterious Past and Terrifying Future of the World’s Most Dangerous Disease and co-author of Biowarrior: Inside the Soviet/Russian Biological War Machine. Her articles have appeared in Discover, the L.A. Times, the Washington Post, The New Republic, Proto, Natural History Magazine, among other publications.

About Discover magazine:
Take an exciting adventure with Discover magazine as it reports captivating developments in science, medicine, technology, and the world around us. Spectacular photography and refreshingly understandable stories on complex subjects connect everyday people with the greatest ideas and minds in science.