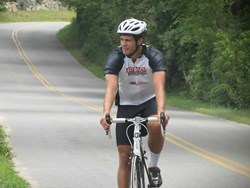 John Donnally – who has fought the disease since the age of nine – embarks this week on a two-month, 4,000-mile cycling journey from SF to NYC.

From a press release from TBDA and BALF:

Today, the Tick-Borne Disease Alliance (TBDA) – which is working in conjunction with the Silicon Valley-based Bay Area Lyme Foundation – announced the West Coast launch of a two-month, cross-country initiative designed to heighten awareness, support research funding, and promote advocacy for Lyme and other tick-borne diseases. According to new findings from the Centers for Disease Control (CDC), Lyme disease is a “tremendous” public health problem, infecting 300,000 people every year, 10 times more than previously reported.

In California, western black-legged ticks – which transmit Lyme disease – have been found in 56 of the state’s 58 counties, prompting TBDA and Bay Area Lyme Foundation to underscore the importance of prevention, accurate diagnosis and early treatment. Currently, lack of awareness and unreliable testing results in treatment delays or even misdiagnosis. Once past its early treatable stages, Lyme and other tick-borne illnesses can quickly become debilitating diseases with a range of symptoms, including neurological problems, paralysis, and agonizing joint pain.

In an effort to raise $50,000 to help improve Lyme disease diagnosis and testing, 24-year-old John Donnally – who has fought the disease since the age of nine – will embark upon a two-month, 4,000-mile cycling journey from San Francisco to New York City. On Sunday, September 29, Donnally will be joined by fellow cyclists and local Lyme disease advocates to kick off this cycling tour at Vista Point, the north side of the Golden Gate Bridge in Sausalito. Together, they will ride with him into San Francisco officially launching the TBDA’s Bite Back for a Cure campaign. The initiative will raise funds to advance testing, research and treatment of an insect-borne disease that’s growing faster than West Nile virus, according to TBDA.

On Sunday, September 29 at 6 p.m., Donnally arrives at Bay Area Lyme Foundation’s Portola Valley headquarters, where he will be welcomed by Executive Director Ana Thompson and members of Bay Area Lyme Foundation’s board of directors, several whom contracted Lyme disease near their homes. Donnally will meet other Bay Area residents battling Lyme disease along with scientists and researchers from Stanford University who are working to accelerate medical breakthroughs for Lyme disease. Dr. Jayakumar Rajadas of the Stanford’s Biomaterials and Advanced Drug Delivery Laboratory (BioADD) and Dr. Cheryl Koopman, Professor of Psychiatry and Behavioral Science will attend.

“I’m thrilled to welcome John to our community as he kicks off this admirable ride across America,” said Thompson. “We believe that understanding the importance of prevention, accurate diagnosis and early treatment go hand in hand with enjoying the outdoors. John is helping Bay Area Lyme Foundation get this message out in an effort to ensure that fewer people contract Lyme disease here in California and across the country.”

A former Colgate University lacrosse player, Donnally – who was diagnosed with Lyme disease in 2003 and again in 2011 – hopes to connect with families and individuals who suffer from Lyme and other tick-borne diseases as he rides through large and small communities across the country. Donnally is scheduled to complete the ride in November as he traverses the George Washington Bridge on the final stretch towards New York City.

“By 2020, it’s expected that there will be more than 600,000 new cases of Lyme disease every year, and one in five will likely suffer with long-term symptoms – just like me and my family,” said Donnally. “Through my trip across America, I want to raise awareness and build support to defeat these debilitating diseases.”