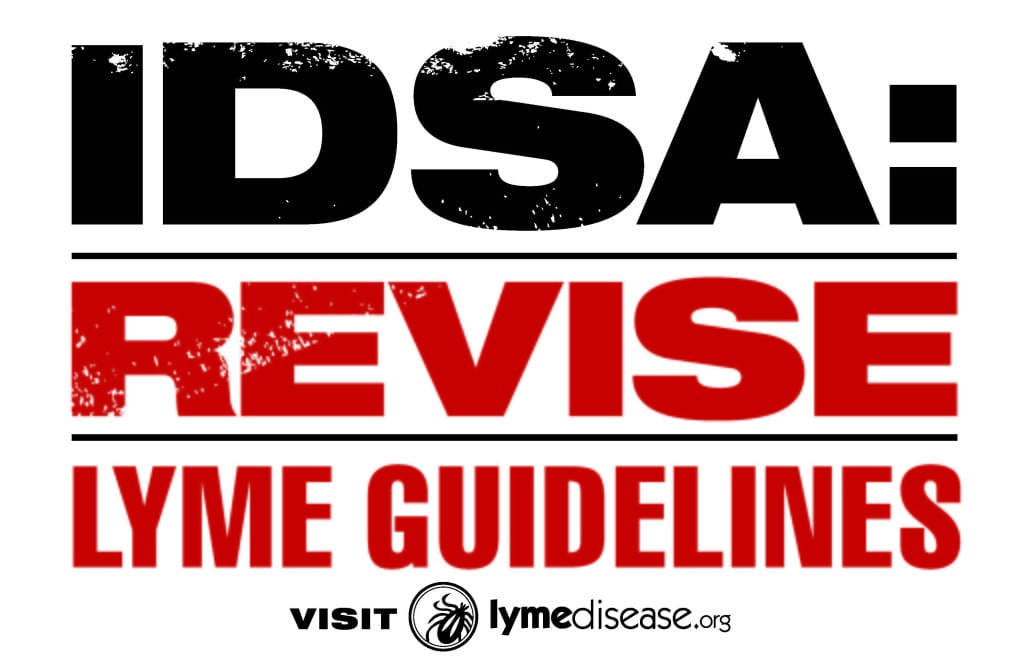 San Francisco, CA… When the US Centers for Disease Control and Prevention (CDC) recently increased its estimate of Lyme disease from 30,000 to 300,000 cases annually, it made the national news. However, that number refers only to officially diagnosed cases of Lyme disease. Because of rampant “Lyme denialism” by the CDC and the medical establishment, hundreds of thousands of additional cases of Lyme disease go undiagnosed and untreated—and people are left to suffer.

Lyme denialism starts with the Lyme treatment guidelines put forth by the Infectious Diseases Society of America, a group that will meet in San Francisco October 2-6. This private medical association essentially sets Lyme treatment policy for the US. The CDC posts the guidelines on its website, and recommends that doctors follow the guidelines in treating Lyme. Insurance companies use them to decide what treatments to pay for.

People with Lyme and their advocates will stage a demonstration at Moscone Center South, 747 Howard Street, on Saturday, October 5, from 11 am to 2 pm.

“Lyme disease is a serious illness made much worse by the IDSA Lyme guidelines, which restrict access to care,” says Dorothy Leland, Outreach Coordinator for the advocacy group LymeDisease.org, which is organizing the  protest. “The IDSA defines Lyme disease so narrowly that many people are denied treatment altogether. Even people in the early stages of the disease—when they can most easily be cured—are often told they don’t have Lyme and are denied treatment.”

This sets the stage for the disease to become chronic, burrowing into the body and potentially causing a lifetime of misery and disability. Furthermore, the IDSA also denies the existence of chronic Lyme, as people get sicker and sicker.

“Some people with Lyme actually do fall within the IDSA’s narrow definition of Lyme disease, and the guidelines let them have up to 28 days of antibiotics,” says Leland. “But if they are still sick beyond that initial month of treatment—too bad. The guidelines cut them off, pronouncing them cured. This leaves Lyme patients in a world of hurt. Their lives are totally disrupted by pain and disability, but their doctors won’t give them further treatment.”

People with persistent Lyme symptoms are forced to seek out the few doctors willing to treat Lyme outside the restrictions of the IDSA guidelines, and must pay out-of-pocket for treatments their insurance won’t cover.

Lyme disease is a bacterial infection transmitted by the bite of Ixodes ticks, which are carried by deer, rodents, and birds, and often found in wooded areas and grassy fields. Ticks are tiny and their bite is painless; thus, many people who catch Lyme don’t even realize they’ve been bitten.

In the San Francisco Bay Area, Lyme-infected ticks have been found in many popular recreation spots including Point Reyes National Seashore, as well as parks in Marin, the East Bay and Santa Cruz. Depending on where you live, they could even be in your own yard.

Early signs of infection may include a bull’s-eye rash and flu-like symptoms, such as fever, muscle aches, headaches, and fatigue. As it progresses, Lyme disease can invade multiple organs of the body, resulting in neurological disorders, crippling muscle and joint pain, disabling fatigue, heart problems, and other serious symptoms.

For more information about Lyme disease, the demonstration, and why we are protesting against the IDSA: www.lymedisease.org

LymeDisease.org, a 501 (c) (3) organization, advocates for people with Lyme and other tick-borne diseases, educates the public, and funds medical research. We publish a quarterly journal, The Lyme Times, and use social media to disseminate news, information and policy analysis.