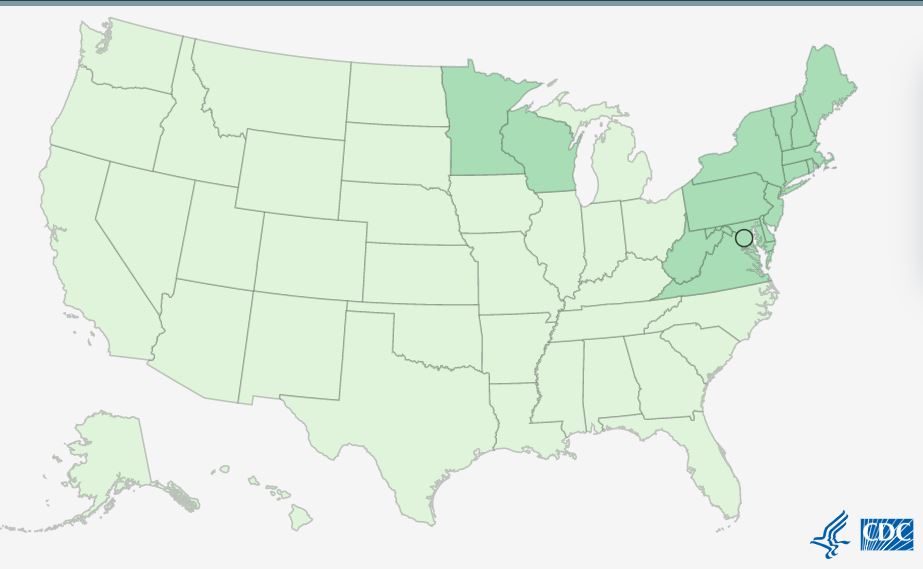 Phyllis Mervine, Founder and President of LymeDisease.org, delivered the following public comments at the recent meeting of the federal Tick-Borne Disease Working Group.

If you look at the CDC maps and don’t know better, you might think Lyme disease only occurs in the contiguous northeast and mid-Atlantic states, Minnesota and Wisconsin. The entire rest of the country is now light green—or LOW RISK. High-risk hot spots in low-risk states are not marked and don’t count.

My county, Mendocino, is bigger than Rhode Island and Delaware combined. Back in the nineties, the health department reported the incidence in my county was 26/100,000. That’s the same as Wisconsin’s 3-year average, comfortably in the middle of the CDC’s high-risk zone.

The incidence in Trinity County, just to the north of me, was 74/100,000, comparable to Vermont, the second highest on the CDC’s list.

World-renowned UC Berkeley entomologist Robert Lane, John Madigan, distinguished professor of medicine and epidemiology at the UC Davis School of Veterinary Medicine, and Paul Lavoie, a physician at San Francisco’s Pacific Presbyterian Medical Center, conducted a research project in my neighborhood showing that 37% of the residents had definite or probable Lyme disease. The researchers concluded that the annual incidence was comparable to or higher than it was in the Northeast.[i]

Why does this matter so much?

States designated as high-risk may get federal funding for their serious problem with Lyme disease. Doctors in CDC’s high-risk states at least might think of Lyme disease when a patient comes in with symptoms.

The CDC downplays the incidence of Lyme disease in all but 15 states (and Washington, DC). Doctors who don’t think of Lyme disease also don’t order tests, artificially depressing numbers of reported cases. Patients are left in a limbo of sickness or misdiagnosed with MS, chronic fatigue or one of the other diseases that Lyme mimics.

If doctors do test, California isolates of Borrelia burgdorferi are less likely to test positive against antigen from B31, the New York isolate used for the big commercial tests like Quest and LabCorp. California has the most species of Borrelia in any state, including relapsing fever Borrelia. and more are being discovered as we speak.

California also has at least 10 other tick-borne diseases. Even if patients are eventually diagnosed correctly, they are more likely to have worse outcomes and higher healthcare costs.

I’m asking the CDC to give us maps that more accurately portray the incidence of Lyme disease all across America. We shouldn’t go into this fight with one arm tied behind our back.

I know I’m out of time but I want to tell you about one of my friends and neighbors who started having gait disturbances a few years ago. He couldn’t walk properly. No one thought of tick-borne diseases. He gradually became worse. By the time I found out last fall he had developed difficulty swallowing and forming words. I was alarmed and urged him to see a Lyme specialist. He tested positive for several tick-borne diseases. He started antibiotic treatment but it was too late. His disease continued to progress. His wife told me yesterday he had decided to stop all treatment and he has been approved for hospice care.

We need to do more to help people like my friend get diagnosed and treated early, when they can still be cured.

Phyllis Mervine can be contacted at pmervine@lymedisease.org.