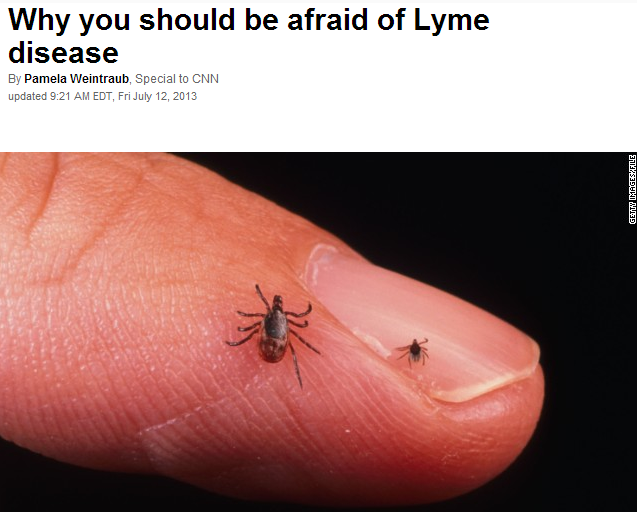 CNN published an editorial by Pam Weintraub that helps set the record straight in Lyme disease. I comment about how the Lyme research agenda has been hi-jacked by an insular group of researchers and why we need to include patients and their physicians as stakeholders in Lyme disease. It’s time for research and treatment guidelines that are accountable and that improve patient care.

Pam’s commentary at CNN spotlights key problems in Lyme research and treatment. The real  travesty here is that research funding has gone to a small group of researchers with a preconceived mindset on Lyme for the past ten years. Researchers who  pursue persistence, like Barthold, find themselves unfunded because they are on the “wrong side of the tracks” in terms of research paradigms. At his testimony at Congressman Smith’s hearing, Barthold said: “Because of firmly entrenched opinion within the medical scientific community . . .research proposals submitted to NIH that feature persistence following treatment are likely to receive prejudicial peer review in the contentious environment of Lyme disease.”

What Dr. Barthold is saying is that the peer review system for government funded Lyme disease research is broken. A comment he received to his last rejected grant application made it clear that the rejection was based on politics rather than science: “The lay public that has so far denied the validity of scientific data will misunderstand the significance of…[persisting non-cultivable Borrelia burgdorferi]…and use it as additional evidence to support the idea of treatment-resistant Lyme disease.” In the same vein, a recent grant application that was approved (perhaps in the same cycle) for Dr. Gary Wormser, chair of the IDSA guidelines panel, engendered controversy when one of the CDC peer reviewers returned his honorary stipend over perceived process irregularities.

As a result of a FOIA request and some excellent reporting by Mary Beth Pfeiffer at the Poughkeepsie Journal, we now know that the reason peer review is broken in Lyme is because a small insular group of researchers have a lock on research funding. The expose documents that CDC and NIH government employees have worked very hard with IDSA researchers to defeat legislation and other efforts to instill accountability into the research process.

Science depends on the free marketplace of ideas. Few scientists refute their own theories; their rivals do. What happens when researchers supporting one paradigm “get hold of some institutional position of power (a scientific journal, a research institute) and impose their favorite “line” of research there, leading to a dead end.” If you can successfully exclude your rivals, you have the whole playing field to yourself. But what is produced is dead-end science that does not improve patient care—you get what Congressman Smith refers to as “the lost decade” of Lyme research. You squander public trust and public funds.

Today, Dr. Wormser says “So what” to the mounting evidence for persistence. A new article by Dr. Stricker and me summarizes the 23 studies demonstrating persistence of the Lyme bacteria in animals and 27 published case reports of persistence in humans. What constitutes “good enough” evidence to treat? A decision to intervene and provide care is a value judgment based on the risk of acting too soon and the risk of acting too late. Does it matter if alternative treatments are available? Who decides? These are matters of public policy involving moral values, not science. They are matters of right and wrong. Public policy determinations need to involve stakeholders affected.

The Institute of Medicine recognizes that for guidelines to be trustworthy patients must be  involved when the questions are framed, when guidelines are reviewed, and that that  guideline panels must include “those affected” by their recommendations. Why? Because those affected by public policy determinations should have a voice in them.  Patients also need a voice in setting the research agenda. New government institutions like Patient Centered Outcomes Research Institute recognize the importance of patient involvement in  setting research agendas to achieve outcomes that matter to patients. (I serve on the Patient Engagement Panel of PCORI.) It’s time to create a “no fly zone” in the Lyme Wars by including all stakeholders at the table and instilling accountability into the research funding and guideline setting processes.

While I welcome your comments here, I also encourage you to post thoughtful comments in the comment section, where they will receive a larger audience, at Pam’s CNN article.

LYME POLICY WONK blog is written by Lorraine Johnson, JD, MBA, who is the Chief Executive Officer of LymeDisease.org, formerly CALDA. Contact her at lbjohnson@lymedisease.org.