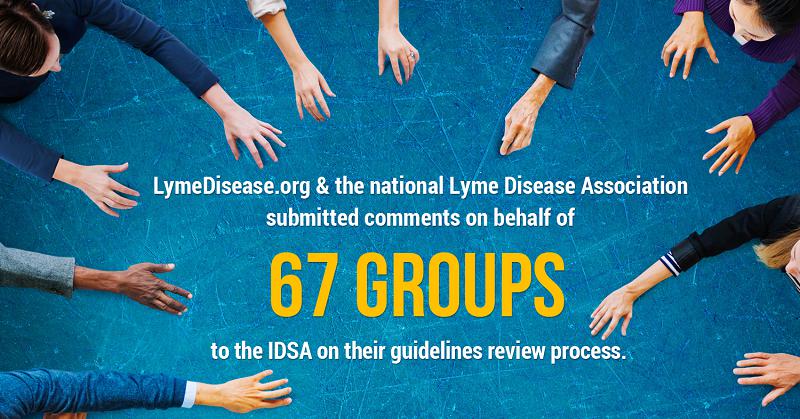 LymeDisease.org and the national Lyme Disease Association filed comments on behalf of 67 patient groups across the nation. LymeDisease.org also launched a patient survey on March 28 to solicit patient views. It drew more than 5,500 responses. We included findings from the survey in the formal comments we filed with the IDSA.

On March 9, 2015, the Infectious Diseases Society of America announced that it will update its Lyme disease guidelines. The IDSA provided a 30-day window for the public to comment on its guideline development process. This period closed on April 9.

The comments highlighted a number of flaws in the process, including failure to conform with the Institute of Medicine standards on creating trustworthy guidelines. The IOM standards require that the panel includes populations expected to be affected by the guidelines. However, this panel does not include any Lyme patients, any physicians who treat them, or even the full spectrum of views held by researchers.

In addition, although the guidelines are sponsored by three seemingly independent organizations (the IDSA, the American College of Rheumatology, and the American Academy of Neurology), the fact is that all of these organizations had members who were investigated by the Connecticut Attorney General for antitrust violations in connection with the IDSA 2006 Lyme guidelines.

WE CONCLUDE WITH THE FOLLOWING RECOMMENDATIONS:
The current Plan fails to provide the type of process integrity essential to creating trustworthy guidelines. We believe that the Plan to should be revised to achieve the following goals.
DOWNLOAD THE FULL COMMENTS FILED
DOWNLOAD ADDITIONAL COMMENTS FILED
LEARN MORE ABOUT THE OUTCOMES IMPORTANT TO PATIENTS SURVEY
We will be publishing the results of our survey soon.
The LYME POLICY WONK blog is written by Lorraine Johnson, JD, MBA, who is the Chief Executive Officer of LymeDisease.org.You can contact her at lbjohnson@lymedisease.org. On Twitter, follow her @lymepolicywonk