TOUCHED BY LYME: When statistics get in the way of the real story 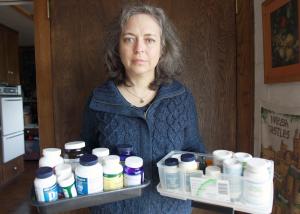 This week, northern California’s Auburn Journal published a story about Virginia Ward, co-founder of the Auburn Lyme support group, and her efforts to educate their community about Lyme disease. It is a positive article with good information. Click here to read it.

However, like many articles, it hits a snag when it reports local Lyme disease statistics. California, like many other states, has few Lyme cases that pass the strict definition allowable by the CDC and the state health department. So, Placer County (where Auburn is located) had only one reported case of Lyme disease in 2011, for instance. If you don’t put that number in the proper context, it grossly misinforms the public.

Here’s my response, which was printed in the paper:

Thanks for bringing attention to Lyme disease (Journal, Jan. 8). One point cries out for further explanation, however. It’s true that only a few cases of Lyme have been officially reported for Placer County. Alas, that’s most likely due to huge deficiencies in how Lyme cases are tracked by health departments and the Centers  for Disease Control — not because people don’t have Lyme.

The CDC and the California Department of Public Health use a highly restrictive definition of Lyme disease. An example: One way to be officially counted as having Lyme is if a doctor verifies you have an Erythema Migrans rash that’s at least 5 centimeters across. You could have a known tick bite, other symptoms of Lyme and a rash that’s 4.5 centimeters across — and it won’t count!

Not everyone with Lyme gets an EM rash, and there are other ways to “officially” have it. But lab tests are problematic. Most measure antibodies to Lyme, not the disease itself. And there are many reasons why a person with Lyme might not produce measurable antibodies at the time of the test. Again, though they may be terribly ill, these people “flunk” the CDC standard for being counted as Lyme disease.

So, what are we left with? A lot of sick people with no diagnosis or treatment and communities that mistakenly believe Lyme is not much of a risk in their area.

Lyme-infected ticks have been found in Placer County. It behooves people to learn how to protect themselves and their families from getting bitten in the first place. It also behooves people to learn to recognize the signs of Lyme disease (which might include an EM rash smaller than 5 centimeters across) so they can track down the medical care they need.