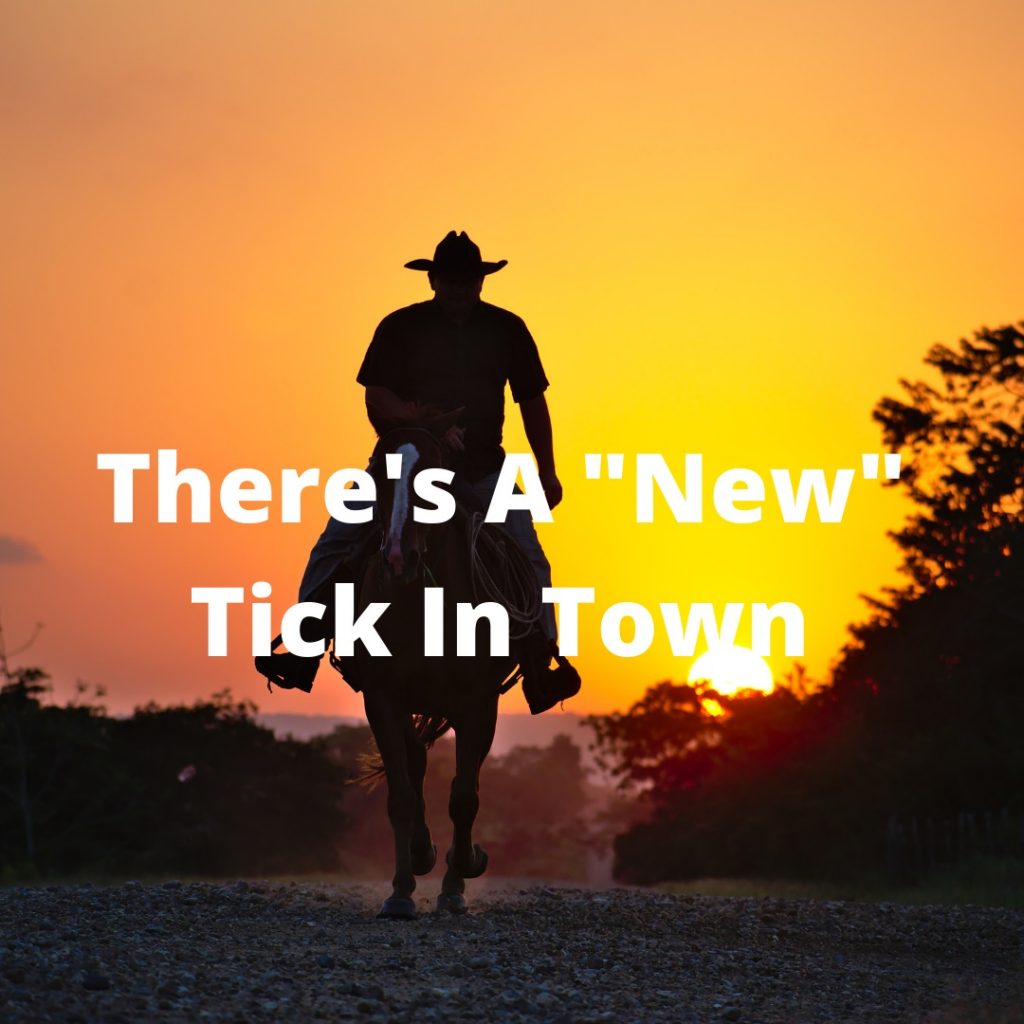 The lone star tick (Amblyomma americanum) has been rapidly expanding its range, from the Southern United States into the Northeast and Midwest.

This tick is a major vector of several viral, bacterial, and protozoan pathogens affecting humans, pets, livestock, birds and other wild animals in the United States. In some Midwestern states, it is commonly known as the “turkey tick” due to its association with wild turkeys. (Childs and Paddock, 2003)

A recent crowdsourced science project has documented the largest increase of the lone star tick in decades. Researchers documented new tick encounters in over 300 counties—including six new counties in western states—where these ticks had not been documented before.

In a study published in the Journal of Medical Entomology, researchers at the University of Rhode Island (URI) evaluated over 9,500 photos submitted between 2014-2019 to the TickSpotters surveillance program.

To document the changes, researchers first identified the ticks in the submitted photos, then logged the county each was reported from. They used this method to plot the geographic ranges of three medically important U.S. tick species: Amblyomma americanum, Ixodes scapularis and Ixodes pacificus. The last two are the vectors for Lyme disease.

In addition, the lone star tick was reported in several counties in the western US, a region not typically associated with these ticks. Notably, it was found in six new counties in California, four counties in Colorado and one new county each in Idaho, Oregon and Utah.

“The causative drivers of these upturns are complex, but have a lot to do with increased host availability, warming temperatures, and moisture availability,” researcher Heather L Kopsco, PhD, told Entomology Today,

Female lone star ticks are identifiable by a single silvery-white spot on the center of their back (scutum.) The male lone star tick is slightly smaller, with varied white streaks or spots around the margins of its body. 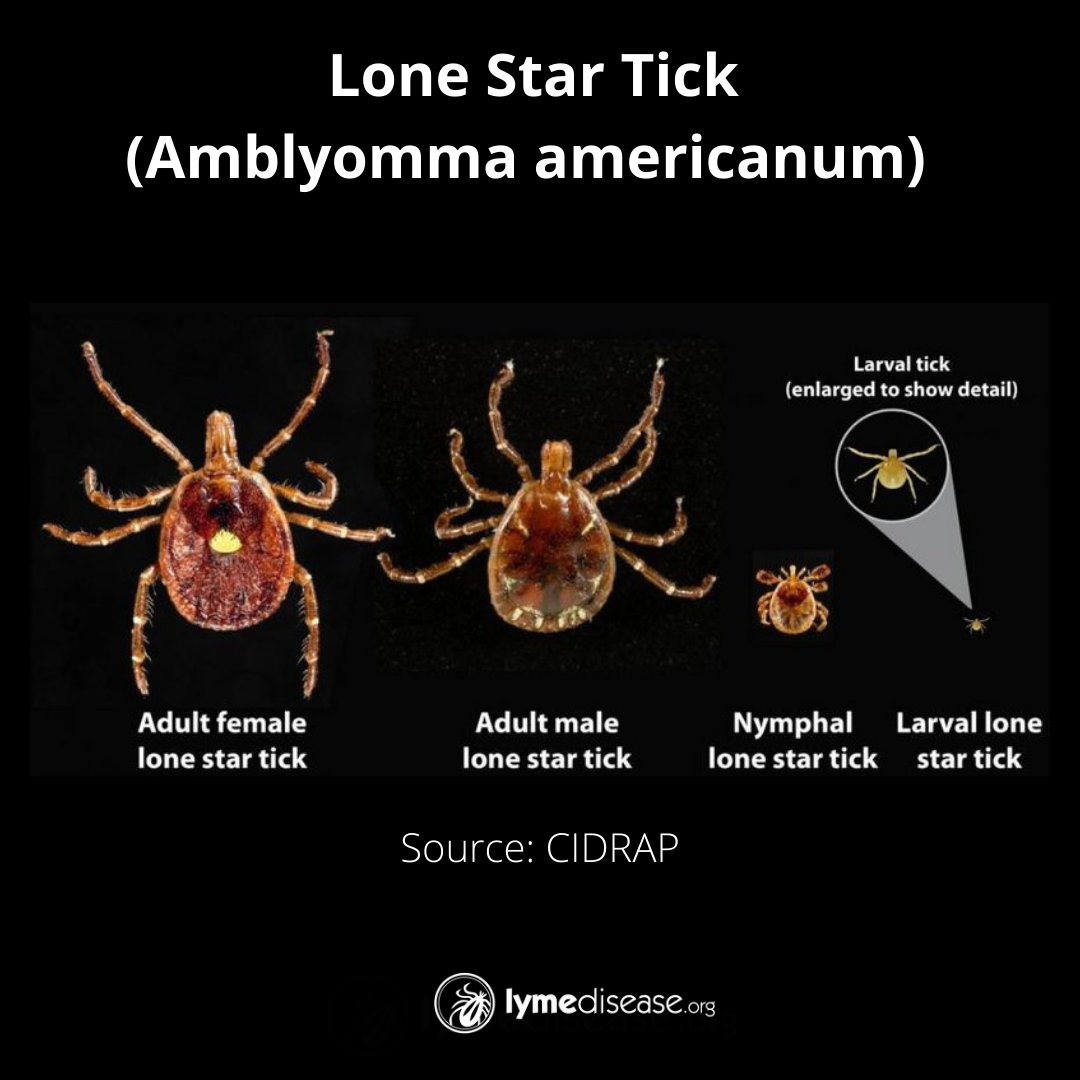 “Heartland is an emerging infectious disease that is not well understood,” says Emory University’s Gonzalo Vazquez-Prokopec PhD, senior author of the study.

Interestingly, the genetic analysis of the Heartland virus from Georgia shows that it is 2%-5% different from previous genetic sequences of the virus.

“These results suggest that the virus may be evolving very rapidly in different geographic locations, or that it may be circulating primarily in isolated areas and not dispersing quickly between those areas,” Vazquez-Prokopec says.

The Heartland virus wasn’t officially named until 2009. However, the CDC has since found evidence of it in wild animals in at least 13 states, including stored samples from deer dating back to 2001. (Clark et al, 2018)

Because the initial symptoms of these tick-borne viruses resemble the flu, and tests for it are not readily available, it is likely being undetected and underreported in humans.

“It is super-fast. It can move from below your knees to the top of your head in a matter of seconds.” Mather says it is the tick most frequently found attached to humans in the South.

The greatest risk of being bitten by the adults exists in early spring through fall. Lone star ticks are found mostly in woodlands with dense undergrowth and around animal resting areas, where they will quest on tall grass and low hanging branches.

Nymphal ticks quest lower to the ground but also move fast. If you encounter a patch of larvae, you’ll find they may latch on by the hundreds. Tick Encounters recommends using sticky duct tape to remove these larvae as soon as possible.

The range of the lone star tick in North America has increased dramatically over the past 30 years. Large numbers have been recorded as far to the northeast as Maine, as far to the southeast as Florida, as far south as Mexico and as far west as Colorado. Recently, patchy encounters have also been noted in Canada and the West coast. 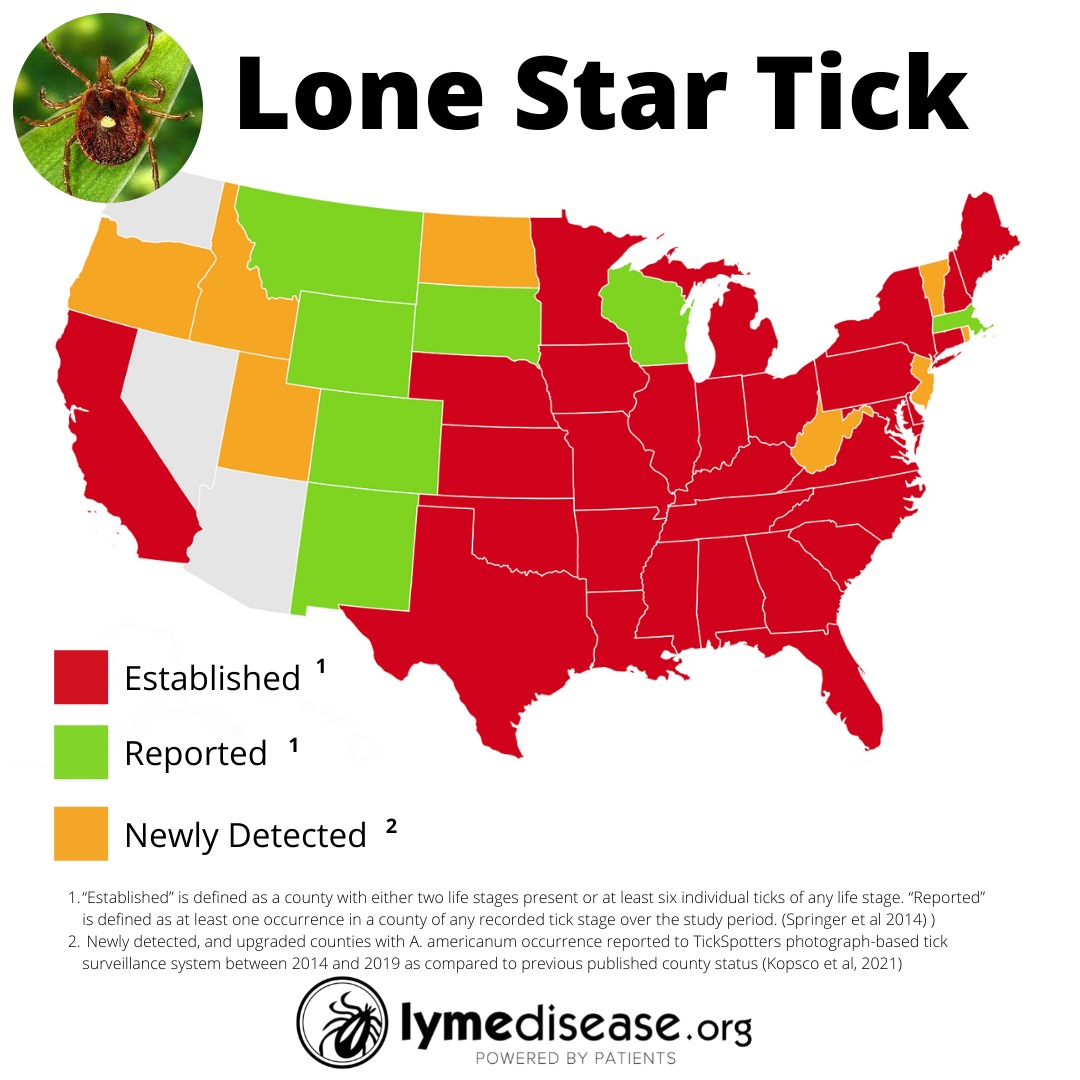 The following is a list of symptoms of diseases caused by the bite of the lone star tick per the CDC.

People may not react after every alpha-gal exposure.

Seek immediate emergency care if you are having a severe allergic reaction.

Scientists are still learning about possible symptoms caused by this virus.

People diagnosed with Bourbon virus disease had symptoms including:

Patients with Bourbon virus will have low blood counts for cells that fight infection and help prevent bleeding.

There is no medicine to treat Bourbon virus disease. Doctors can only treat the symptoms. For example, some patients may need to be hospitalized and given intravenous fluids and treatment for pain and fever. Antibiotics don’t work against viruses.

Signs and symptoms of ehrlichiosis typically begin 1-2 weeks after the bite of an infected tick. Left untreated, ehrlichiosis can be fatal. Early treatment with doxycycline is highly effective.

Early signs and symptoms (the first 5 days of illness) are usually mild or moderate and may include:

About a third of people with ehrlichiosis report a rash, which can look like red splotches or pinpoint dots. This typically develops five days after the fever begins.

Early treatment can reduce your risk of developing severe illness, which can include:

Early signs and symptoms are not specific to RMSF. However, the disease can rapidly progress to a life-threatening illness.

Signs and symptoms can include:

While almost all patients with RMSF will develop a rash, it often does not appear early in illness, which can make RMSF difficult to diagnose. RMSF rash usually develops 2-4 days after fever begins. The appearance of the rash can vary widely. Some rashes look like red splotches and some look like pinpoint dots.

Some patients who survive severe RMSF may be left with permanent damage, including amputation of arms, legs, fingers, or toes (from damage to blood vessels in these areas); hearing loss; paralysis; or mental disability.

It is not known whether antibiotic treatment is necessary or beneficial for patients with STARI. Nevertheless, because STARI resembles early Lyme disease, physicians will often treat patients with oral antibiotics.

The rash of STARI is a red, expanding “bull’s-eye” lesion that develops around the site of a lone star tick bite. The rash usually appears within seven days of the tick bite and expands to a diameter of three inches or more. The rash should not be confused with much smaller areas of redness and discomfort that can occur commonly at the site of any tick bite.

Patients may also experience fatigue, headache, fever, and muscle pains. The saliva from lone star ticks can be irritating; redness and discomfort at a bite site does not necessarily indicate an infection.

The signs and symptoms of tularemia vary depending on how the bacteria enter the body. Illness ranges from mild to life-threatening. All forms are accompanied by fever, which can be as high as 104 °F.

“Ulceroglandular” is the most common form of tularemia and usually occurs following a tick or deer fly bite or after handing an infected animal. A skin ulcer appears at the site where the bacteria entered the body. The ulcer is accompanied by swelling lymph glands, usually in the armpit or groin.