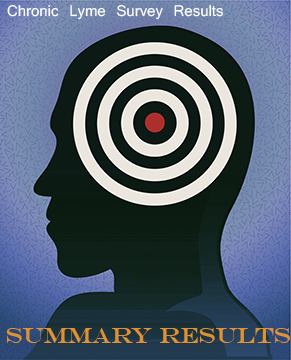 LDo’s most recent survey of over 3,000 patients with chronic Lyme disease was published today by PeerJ. Although the Centers for Disease Control (CDC) recently increased the number of Lyme disease cases in the US from 30,000 to 300,000, little is known about how chronic Lyme disease affects patients. We decided it was time to ask them. This post will provide an overview of the findings and future blogs will focus on other findings regarding coinfection rates, rashes, disability, symptoms and other topics. The study was a joint effort of LymeDisease.Org and Prof. Jennifer Mankoff at Carnegie Mellon University.

Chronic Lyme disease is associated with a poorer quality of life than most other chronic illnesses, according to a newly published comprehensive patient survey. Patients with chronic Lyme disease have high disability and unemployment rates and, compared to the general population, are five times more likely to visit healthcare providers and twice as likely to be seen in emergency rooms.

The CDC estimates that more than 300,000 people contract Lyme disease every year in the United States. Approximately, 36% of patients diagnosed and treated early remain ill after a short-term course of antibiotics. The survey used standard questions developed by the CDC regarding health related quality of life. Most patients report three or more symptoms as severe or very severe. The most common severe symptoms include fatigue (48%), sleep impairment (41%), joint pain (39%), muscle aches (36%), and other pain (34%). Physical or mental health problems limit Lyme patient functioning on 19 days each month compared to only two days per month for the general population.

Chronic Lyme patients also use healthcare services more often.  They are five times more likely to visit healthcare providers and twice as likely to be seen in emergency rooms as the general population.

In a nutshell, this study shows that most patients with chronic Lyme disease have severe symptoms, require lots of medical care, and suffer a low quality of life with high disability and unemployment rates.

Future blogs posts will focus on the rate of co-infections, symptoms, presence of rash, basis for diagnosis and other significant findings of the study.

The full article is available open access–meaning you can read it for free. Johnson, L., Wilcox, S., Mankoff, J. and Stricker, RB (2014) Severity of Chronic Lyme Disease Compared to Other Chronic Conditions: A Quality of Life Survey. PeerJ, DOI 10.7717/peerj.322.