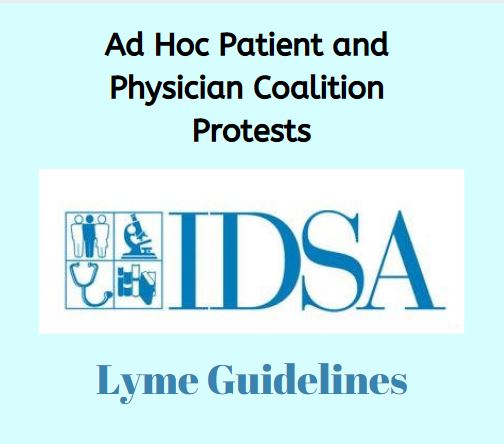 The coalition is spearheaded by LymeDisease.org and ILADS. (The International Lyme and Associated Diseases Society, a medical association for Lyme-treating doctors.) Other participating groups include the Lyme Disease Association, Bay Area Lyme Foundation, and the Canadian Lyme Disease Foundation.

After the IDSA posted its new treatment guidelines in June, LymeDisease.org’s Lorraine Johnson and Dr. Betty Maloney of ILADS went over them meticulously and wrote a 58-page rebuttal to the IDSA.

Since then, Lyme patient advocacy groups of all sizes have endorsed our comments and asked us to add their names to the coalition.

The most recent addition comes from Association ChroniLyme, from Lyon, France. Here’s what the group tweeted:

I also received an email from ChroniLyme, in both English and French. Here’s the English part:

I am Bertrand PASQUET. I am president of one of the French associations working for an improvement of the management of Lyme disease in France. I have read the document that the North American associations wrote in the context of comments on the IDSA draft. It’s a fantastic job and I found this document extremely thorough. Congratulations!

If you are interested, we agree that our association be included in the list of the associations that have endorsed this document. This could give an international dimension to the protest.

In France, the counterpart of IDSA, namely the Society of Infectious Pathology of French Language (SPILF) has just published its own guidelines. They are as restrictive as those of 2006 and have been developed, as for those of IDSA, without taking into account French associations or expert patients. Some patients have worked with SPILF, but no one knows who it is! All French associations also reject this SPILF document.

Thank you, Bertrand! We’re happy to add you to the list.

To other Lyme advocacy/support groups: if you would like to be listed as an endorser of our comments, please send an email to dleland@lymedisease.org, with contact information for your organization.

See which groups have signed on (updated): 77 groups, 8 countries

TOUCHED BY LYME is written by Dorothy Kupcha Leland, LymeDisease.org’s Director of Communications. She is co-author of “When Your Child Has Lyme Disease: A Parent’s Survival Guide.” Contact her at dleland@lymedisease.org.