TOUCHED BY LYME: When "Lyme Loonies" is a badge of honor 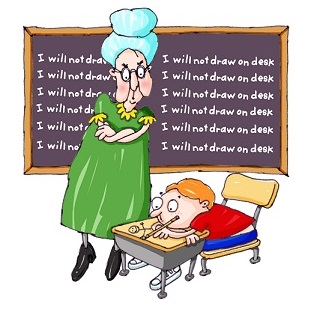 Cartoonist/Lyme warrior David Skidmore develops a line of cartoons to document the trials and tribulations of Lyme treatment.

When David Skidmore was a little boy, he used to get in trouble for drawing on the desks at school. He says it was “more pleasurable than drawing on paper, because it was naughty.” When he grew up, he became a graphic artist in New York, designing greeting cards as a side business.
.
Four years ago, he was bitten by a tick in the woods of Pennsylvania and developed a bull’s-eye rash. His doc gave him 20 days of doxycycline, and (no surprise to my readers!) it wasn’t sufficient to keep Lyme disease at bay. Before long, Skidmore’s health was on the skids in a major way. And like other folks with Lyme, was forced to join the medical merry-go-round of seeking a doctor who would take his symptoms seriously, diagnose him properly, and treat him correctly.
.
Finally, he’s undergoing treatment for neuro-Lyme now. But that’s not what this column is about. In the midst of all the challenges that come with long-term Lyme treatment, David has found a new calling. He’s using his considerable artistic skills and quirky sense of humor to document the trials and tribulations of living with Lyme disease. He started churning out cartoons in a series he calls “Lyme Loonies.” (For you newcomers, that’s how a federal official in charge of Lyme disease research programs once famously referred to Lyme patients and advocates. Skidmore uses the phrase like a badge of honor.)
.
Skidmore is good buddies with fellow cartoonist John McPherson, whose “Close to Home” comic has a national audience—and who also is being treated for Lyme disease. McPherson suggested that Skidmore put his Lyme Loonies on Twitter, which he did. And then, it was off to the races.
.
Twitter brought the cartoons a lot attention from diverse corners. ILADS soon snapped him up. He and the organization reached an agreement to use the Lyme Loonies cartoons for promotion and fundraising. That project is still in the works. I’ll pass along details when I know what they are.
.
However, ILADS and Skidmore agreed to let us use the following cartoon to help publicize our upcoming demonstration against the IDSA, October 5, in San Francisco. (Click here for more details about the protest.)  Now, take a look at our very own Lyme Loonies cartoon. And we hope you’ll share the link with other people you know.
. Click here to see his non-Lyme-related line of greeting cards.

TOUCHED BY LYME is written by Dorothy Kupcha Leland, LymeDisease.org’s VP for Education and Outreach. Contact her at dleland@lymedisease.org.
.