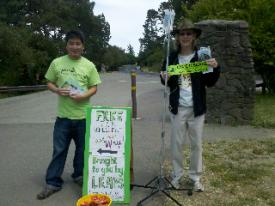 Volunteers from East Bay Lyme Education & Patient Support (LEAPS) handed out Lyme literature and free tick repellent to recreationists at Tilden Regional Park on Sunday, May 22. Notice in the photo that the man on the right is standing with his IV pole.

Tilden Regional Park is a magnificent spot in the hills east of San Francisco Bay, popular for hiking, picnicking, family outings and even weddings. And sometimes, it seems kind of popular with the ticks, too.

Some LEAPS volunteers headed out last weekend, to observe Lyme Awareness Month by offering information and free tick repellent to people at the park. (The repellent was donated by the Tender Corporation, maker of Ben’s.)

I asked Barbara Arnold, from LEAPS, whether people seemed receptive to their message. Here is her reply:

Our experience at Tilden demonstrates that awareness of Lyme disease is growing. Most of the people we talked to were interested to hear what we had to say. We stuck to the message: would you like some free tick repellent while you enjoy the park today? Almost everyone said yes. If we sensed more interest from them, we went on to say: we are a Lyme disease patients group and we’re here today to let people know there is Lyme disease in California. If we still sensed interest, we went on to talk about Lyme facts. Each volunteer had their own focus. Some talked about testing, others about treatment, still others about ecology. It was amazing to tap into that collective knowledge. We then offered the CALDA, ILADS or Doug Fearn’s pamphlets depending on the nature of the questions the people asked. We also had postcards from Under Our Skin, with the Bay Area air times and dates written out.

A few people brushed us off (say, 2-3 small groups). Nearly everyone accepted the free tick repellent, and of that number I’d say 90% were interested to hear about the connection to Lyme disease. I was expecting the news that Lyme is in California would be greatly resisted. Only one person denied that possibility. Everyone else was interested and wanted to know more about Lyme disease. I’d say about 50% of people said they knew someone who had Lyme and was very sick. We easily talked to 150-200 people in a single 3 hour time slot.

For me, the upshot of the experience demonstrates that there are so many people out there sick with Lyme that we’re almost at a cresting point. Forget 6 degrees of separation. We’re probably at about 2 or 3 degrees. That’s sad, telling, and in its way, a sign that our message is being received, despite IDSA’s ardent attempts to squelch it. I just wish we could have gotten to this point some other way than to have the disease so prevalent in our society.”

The support group meets monthly in Oakland. For more information about LEAPS, check out its website.