"Change will not happen as long as Lymies are invisible" 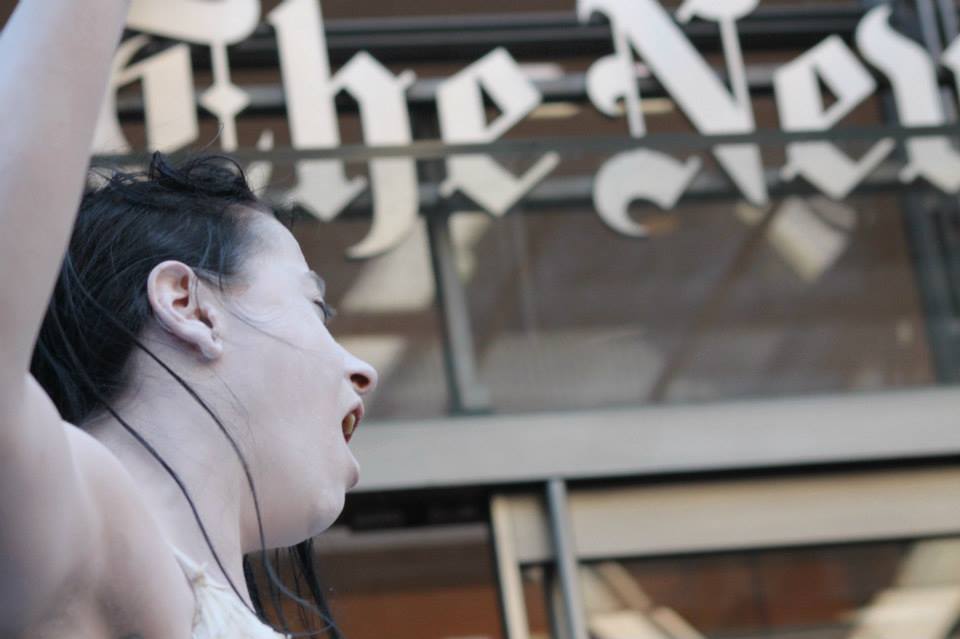 More than 100 Lyme advocates held a “silent vigil” outside the New York Times building this week, joined by a group of silent dancers. They were protesting the media’s silence on Lyme disease and called for more and better coverage of the subject. Paula Kozinn took pictures at the event and shares the following observations.

Yesterday, I had a new understanding of how Lyme looks to outsiders. I know what it is to have it. I know that when I was stuttering or slurring and having palsy in my face, I did not answer the phone. When I’m too sick to go out, no one sees me. At the vigil, I saw a group of people who looked perfectly normal, happy, pain-free. I know that there are good days and bad days, flares and remission, and the people who were well enough yesterday to come, did come. And those who couldn’t, watched from their beds and couches as the photos came in.Yesterday was not a good Lyme day for me. But I had told Jessica that I would take photos, and I know that change will not happen as long as Lymies are invisible. So I shlepped down to the Times, and by the time I got there, I was ready to come home. I had extreme fatigue yesterday and the bottoms of my feet felt like I had large rocks in my shoes. I wasn’t able to stay for the entire event, so I moved around and tried to capture as much as possible, and I left promptly when the dancers left. It took everything I had to get home. The train ride home was difficult. I couldn’t keep my head up and had to rest it on the bar — a germy thing I hate to even touch with my hands.But who knows what I looked like from the outside. When the AIDS group got recognized, it was when the SICK ones came out, with IVs and in wheelchairs. We are a group who likes to pretend we are okay when we’re not. And we hide like hermits when we are at our worst. Getting ourselves a drink or something to eat, or using the bathroom is as much as we can manage on some days. I had plenty of days when I was at my worst, when I couldn’t even manage those basic things.I think the photos did more to show our suffering, through art, than we have managed to express, ourselves. We all need to come out dressed in Scream masks and black hooded robes. We need to organize bios and testimonials of reputable people and known celebrities, so people will open their minds and hearts to this, so they will look at the science and the politics and be appropriately freaked out.Even if they have no compassion, they should want to get this fixed, because it is the biggest part of our declining economy that no one is talking about. I used to start businesses, do tons of non-profit stuff and helped everyone around me. Now, I can barely help myself. Imagine what 300,000 more people a year, becoming useless, looks like in terms of our economy. This is has been ignored by so many for so long, because it is going to take a lot of money to fix. But not fixing it, is compounding the problem.
.
Paula Kozinn is a New York writer who has had Lyme disease since 2000. She is currently writing a book about it.