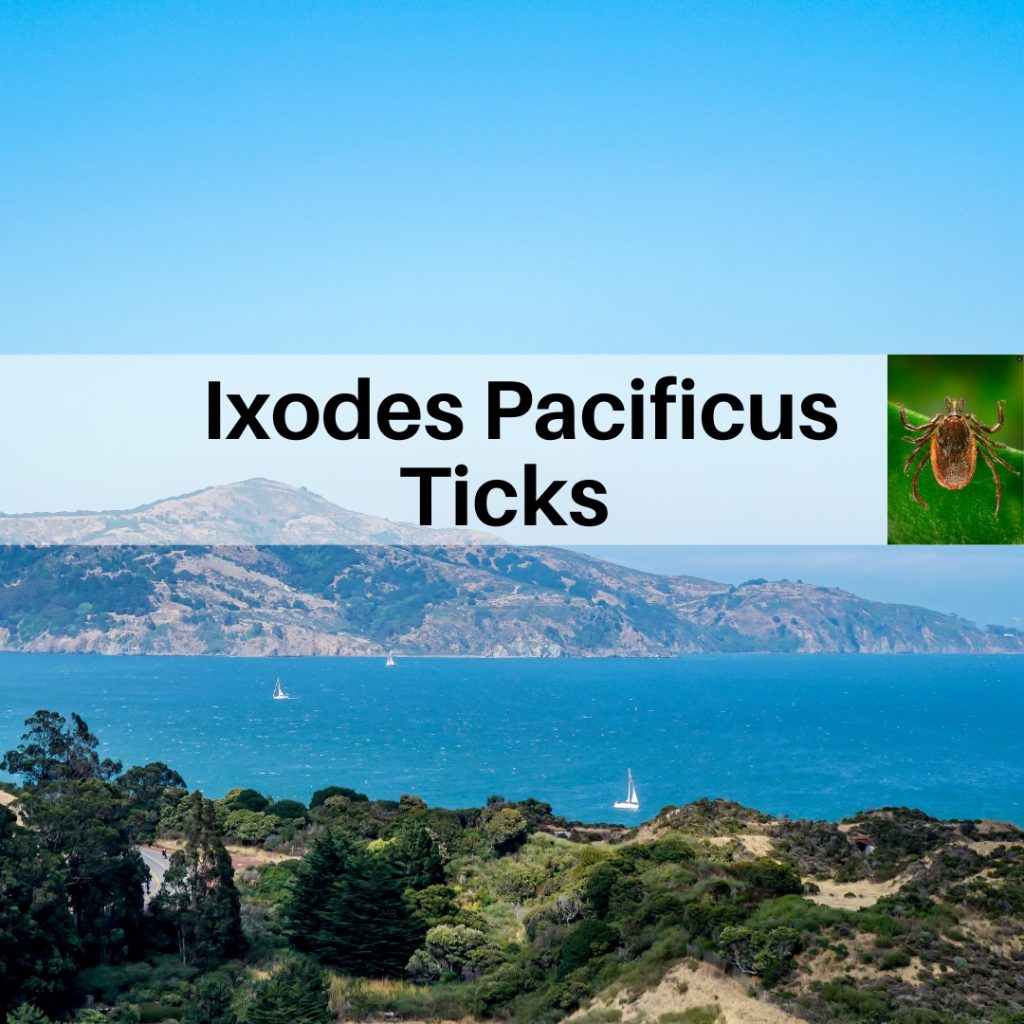 In most of the United States, a tick called Ixodes scapularis carries Lyme disease. However, in the Western states, there’s a different culprit—Ixodes pacificus—also known as the Western blacklegged tick.

A recent review article provides new insight into the pathogens carried by and diseases caused by Ixodes pacificus. The behavior, habitat and pathogens transmitted by the Western blacklegged tick differ from its Eastern cousin.

The authors, from the University of Nevada, published their report in a special issue of journal Pathogens. The article is entitled “Current Research on Hard Tick-Borne Diseases.”

The reviewers do a fantastic job of describing the ecological diversity and complex nature of ticks found in the Western US.

In fact, there are up to 20 different species of Ixodes (hard bodied) ticks reported in California alone. However, Ixodes pacificus is the only known vector for Lyme disease along the West Coast.

The additional hard tick species endemic to the West include Ixodes spinipalpis, I. angustus, I. neotomae, and I. jellisoni. Although these ticks prefer to feed on rodents, both I. spinipalpis and I. agustus occasionally bite humans.

As pictured below, the Western blacklegged tick is well established throughout most of California, the coastal regions of Oregon and Washington, and parts of southern Nevada, northern Arizona and western Utah. 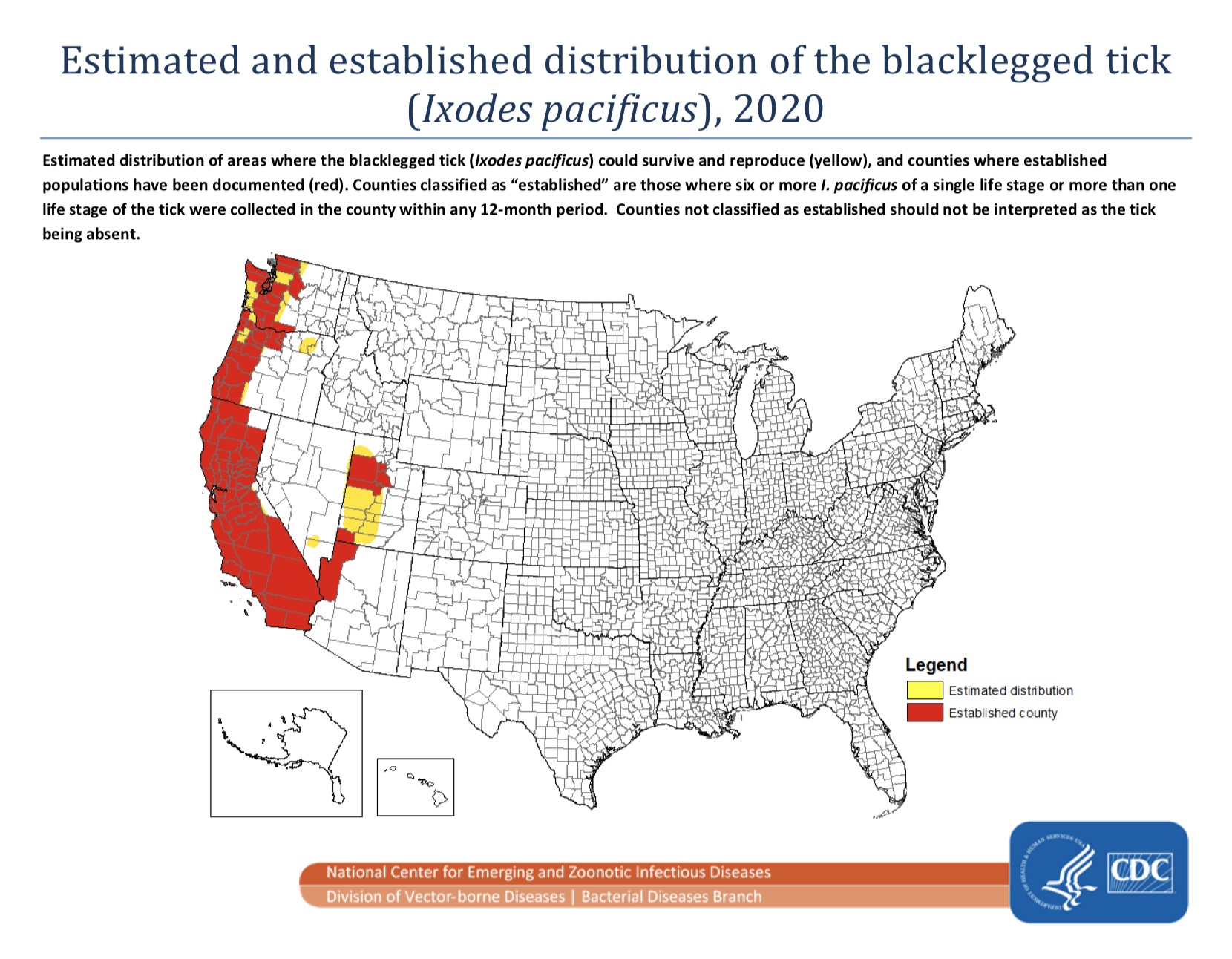 Note: Counties classified as “established” are those where six or more I. pacificus of a single life stage or more than one life stage of the tick were collected in the county within any 12-month period.

The preferred microclimate includes moist, shady areas provided by trees, shrubs, leaf litter or undergrowth. I. pacificus are often found amongst dense oak woodlands, but they can also be found near beaches, and on rocks and picnic tables.

The full range of the Western blacklegged tick extends from Baja California, Mexico, to British Columbia, Canada, but not all of those areas have been thoroughly studied. The process of “active tick surveillance” is quite labor-intensive, and requires funding often not provided to vector-control districts.

Another method of tracking ticks can be done by citizens finding and reporting ticks themselves. This “passive surveillance” technique, as the authors point out, can sometimes give a broader picture from counties that do not conduct active surveillance.

For example, a Northern Arizona University study funded by Bay Area Lyme Disease Foundation received over 16,000 ticks from 49 states between 2016-2017. In that study, blacklegged ticks were found in 83 counties (in 24 states) where they had not previously been recorded. (Nieto et al, 2018)

The lifecycle of Ixodes pacificus ticks generally lasts three years, compared to the I. scapularis which has a two-year life span. During this time, they go through four life stages: egg, larva, nymph, and adult.

After the eggs hatch, the ticks must have a blood meal at every stage to survive.

Blacklegged ticks can feed on mammals, birds, reptiles, and amphibians. The ticks need a new host at each stage of their life. If the host is infected with a pathogen, any tick feeding on that animal will become infected as well.

Although rare, larval ticks may be infectious from birth as some tick-borne pathogens may be transmitted from the female tick to her eggs. This is called transovarial transmission. 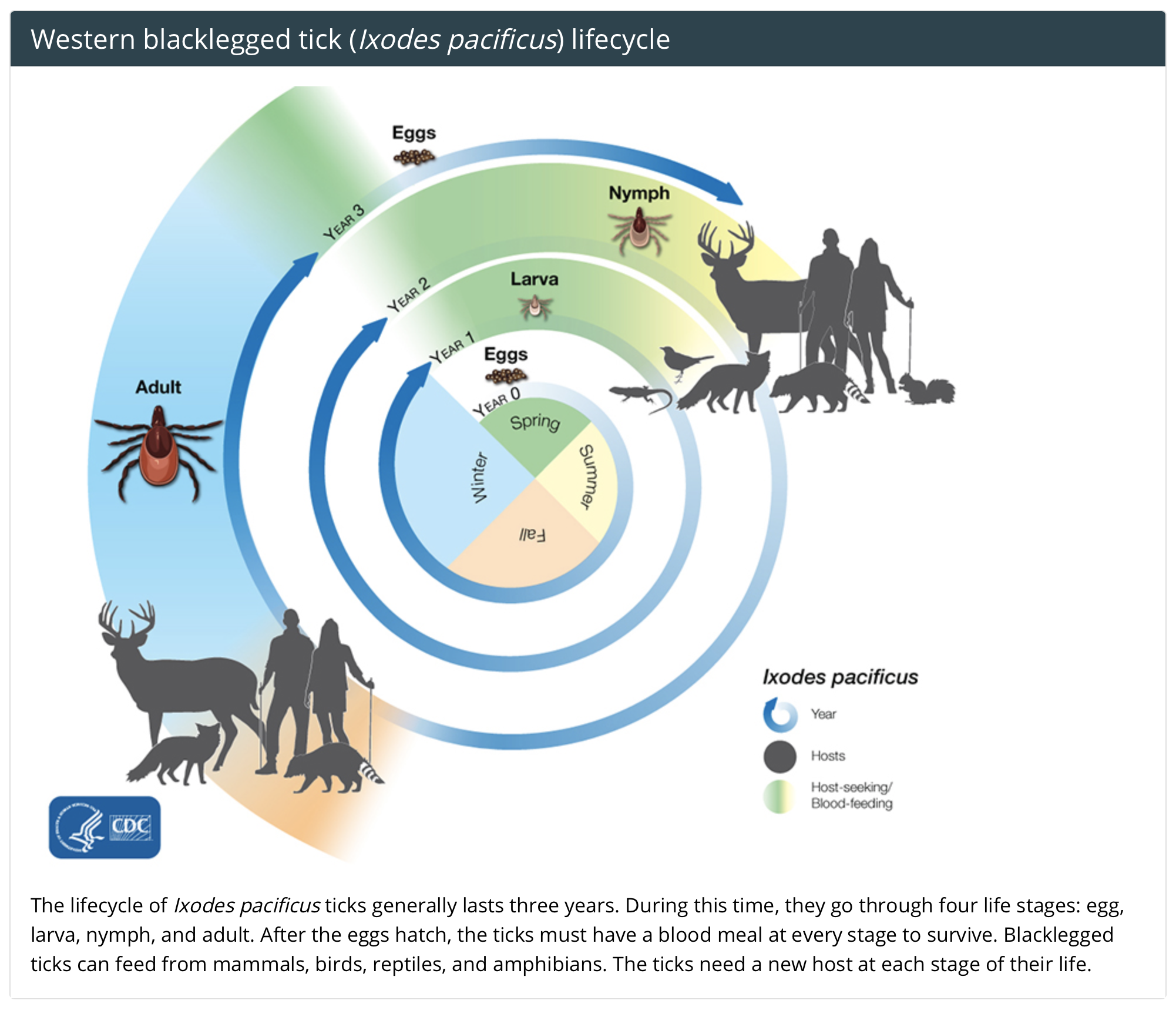 The paper lists the pathogens and reservoir hosts associated with I. pacificus, accompanied by countless references. For those interested in full details, I recommend reading the review. This table recaps the authors’ second table, followed by a short recap of their findings. (McVicar et al, 2022) 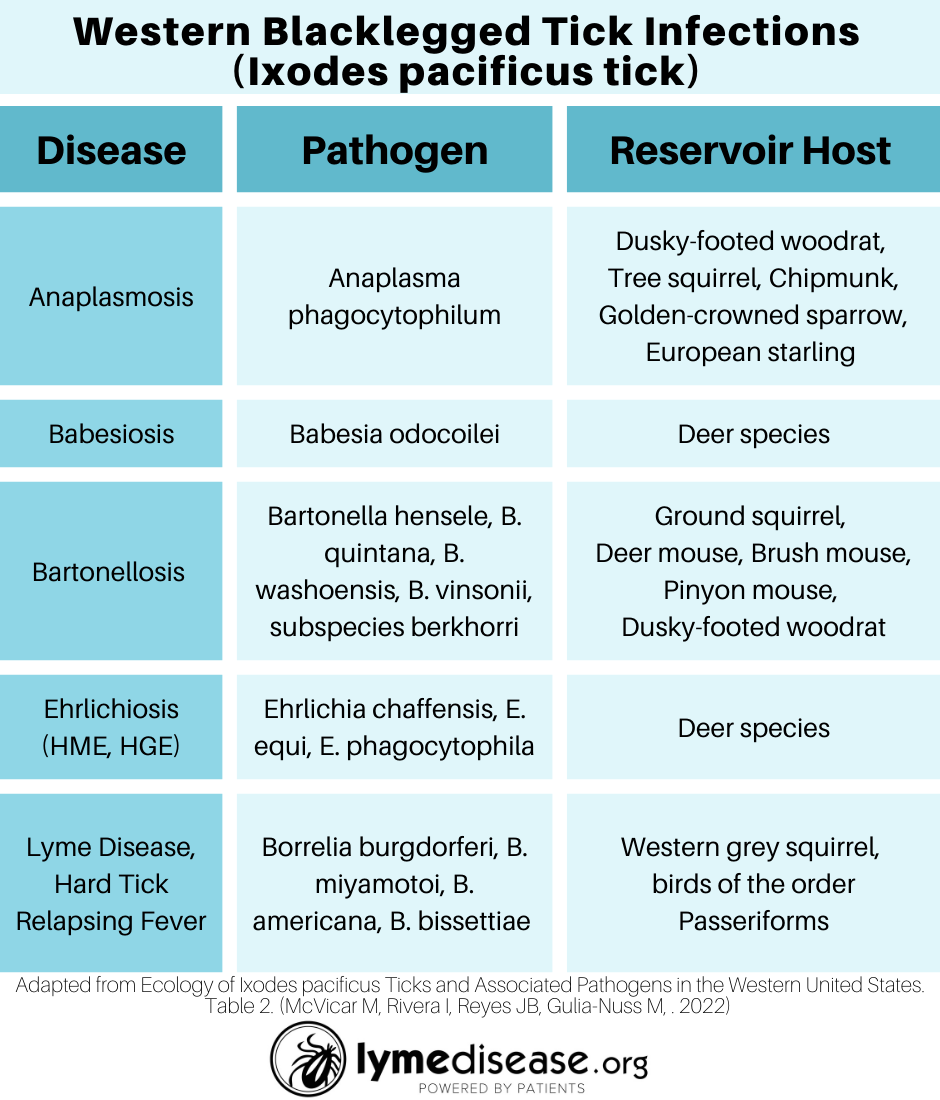 It belongs to a larger group of bacteria known as Rickettsia, which infect white blood cells. I. pacificus is a vector for anaplasmosis in the western US. The infection rate of nymphal and adult I. pacificus ticks is 1% and 10% respectively.

Babesiosis is a disease caused by a malaria-like parasite called Babesia, which infects red blood cells.

As I recently wrote, North America is “ground zero” for Babesiosis, a disease that can be passed from mother to unborn child and through blood transfusions.

One study that collected ticks from multiple sites in California found 3% of I. pacificus ticks were infected with Babesia odocoilei. This is an emerging pathogen not listed on the CDC website as a cause of babesiosis.

The authors state, “Although there is substantive evidence that ixodid ticks on the west coast (i.e., Ixodes angustus, Ixodes pacificus, and Ixodes spinipalpis) are vectors of B. duncani, this has not been yet experimentally confirmed.”  (McVicar et al, 2022)

Bartonella is a bacterium carried by many types of human-biting arthropods including fleas, flies, lice, ticks, and chiggers. In one California study, 19% of ticks tested positive for Bartonella.

“Molecular analysis showed a variety of Bartonella strains, which were closely related to cattle Bartonella and several known human-pathogenic Bartonella species and subspecies: B. henselae, B. quintana, B. washoensis, and B. vinsonii subsp. berkhoffii, suggesting that I. pacificus adults could be a source for Bartonella infections in humans,” as stated by the authors. (McVicar et al, 2022)

While the pathogens that cause HME and HGE are different, the symptoms of the disease aresimilar. Left untreated, both HME and HGE can be life-threatening.

Borrelia burgdorferi sensu stricto (s.s.), a spirochete, causes Lyme disease in North America. The CDC estimates that 476,000 people contract Lyme every year in the US. That’s nearly 5 million cases in the past 10 years, making it the most important vector-borne disease in the nation.

There has been a great deal of research on Lyme disease in California, beginning with the pioneering work of Willy Burgdorfer, Bob Lane and Alan Barbour in the early 1980s.

On the west coast, in addition to Borrelia burgdorferi sensu stricto (s.s.), there are four additional Borrelia species within the B. burgdorferi sensu lato (s.l.) complex. These include B. americana, B. bissettiae, B. californensis, and B. lanei—the latter named after Bob Lane for his discovery.  However, B. burgdorferi s.s. is currently the only one of these recognized as causing Lyme disease.

Co-infection with multiple pathogens is possible in animal hosts and ticks. Thus, a single tick bite can infect a human with more than one pathogen.

In a more recent study, researchers tested ticks for up to five pathogens. In one area of California, infection rates were as high as 31%. (Salkeld et al, 2021)

While Lyme disease accounts for over 80% of all tick-borne cases in the U.S., spotted fever rickettsiosis, babesiosis, anaplasmosis and ehrlichiosis have also seen an increase over the past four decades.

It’s important for researchers and clinicians to know which pathogens co-exist in all regions of the U.S., including the West coast.

A great deal of work has been carried out on ticks in California. However, surveillance and ecological research is lacking in the other Western states.