TOUCHED BY LYME: Those ticks on Tilden Park’s picnic tables 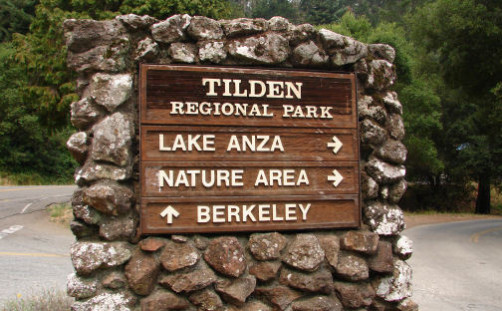 Researchers looking for nymphal ticks at this prominent northern California destination found them in unexpected places, including on and underneath wooden picnic tables and benches.

Tilden Regional Park is a magnificent 2000-acre spot east of San Francisco Bay, tucked in the hills behind UC Berkeley. More than a million people visit it annually. In addition to majestic views, lakes, miles of hiking trails and abundant wildlife, it has 20 picnic areas, a botanical garden, a merry-go-round and a little steam train beloved by children.

I have fond memories of Tilden from my long-ago days at Cal. More recently, I’ve come to know people who’ve caught Lyme disease from infected ticks at Tilden Park. So, I’ve been following with heightened interest the case of the Tilden Park picnic tables, ever since I first heard of it a couple of years ago.

The study has now been published in the December 2011 issue of the scholarly journal, “Ticks and Tick-borne Diseases.” The article is written by Kerry Padgett and Denise Bonilla, of the California Department of Public Health.

Some background: While it’s recognized that nymphal Ixodes pacificus ticks (the immature ones) are the primary vector of Lyme disease in California and the west, those little buggers are hard to find. (They look like tiny specks of dirt.) So, most Ixodes pacificus tick studies have focused on adults ticks, which tend to have a lower infection rate, but are easier for researchers to collect.

In an effort to boost the surveillance of nymphal ticks, in 2008, biologists brought lengths of white cotton fabric to the seven most heavily used Tilden picnic areas during prime nymph season and started “flagging.”

As expected, most of the nymphs they found were in leaf litter. But significant numbers were found on fallen logs, at the base of tree trunks—and, the surprise of the study—on and under wooden picnic tables and benches.

It is the first-ever study to demonstrate a potential risk of catching Lyme disease from using picnic tables and benches.  This matters, because, as the authors point out, “The public are more likely to spend time sitting at picnic tables, wooden benches, and logs than they would sitting in leaf litter, therefore raising the likelihood of acquiring ticks from these wooden substrates.”

In all, researchers collected 170 nymphal Ixodes pacificus ticks from the Tilden picnic sites, five of which tested positive for Borrelia spirochetes, making for a 2.9% infection rate.  Using something called an “entomological risk index,” (4.5 ticks per hour multiplied by 2.9% prevalence) the authors conclude that the risk of exposure to Lyme disease at the picnic sites was “low overall.” (Yeah, unless your bare leg is resting against a wooden table on which an infected nymph is reposing….)

When you are looking at a graph, five infected ticks out of 170 might seem “low risk.” But do they factor in the high stakes? I’m aware of a park ranger who caught Lyme at Tilden more than 20 years ago, and despite treatment, has been seriously debilitated ever since. I suspect the risk doesn’t seem so low to her.

Besides, these ticks were only tested for Borrelia, not for any of the other tick-borne pathogens that could make your life miserable, even if you happened to escape Lyme.

The article is a scientific discussion of an important study that was done, and I’m not criticizing it. California needs more research like this, so the wide-spread misperception that “there’s no Lyme in California” can finally be dispelled.

Yet, scholarly authors tend to parse their words carefully. The only advice to the public offered in this article is that people should “check for ticks after visiting picnic areas and sitting at wooden picnic tables in parks where ticks have been shown to be present.”

My advice would be stronger:  Wear protective clothing and repellent. Check yourself and your children often for ticks, whether you’ve sat at picnic tables or rolled in leaf litter or not. Shower when you get home, taking particular care to check spots of your body you might have missed earlier.

And when you’re at the park, watch out for those “wooden substrates.”

As of this writing, no tick warnings are listed on the Tilden Park website.