LYMEPOLICYWONK: Patient representation on the revised IDSA Lyme guideline panel: Is it real or token? 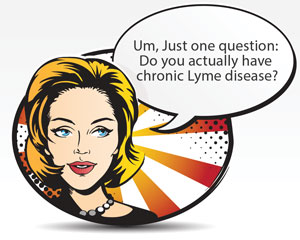 Patient representation on the revised IDSA guideline panel: Is it real or token?

The IDSA guideline development process is a big deal—without making sure the process is fair, there is no real chance for change in the guidelines. And patients need change.  We need to be at the center of process in fact to ensure that guidelines reflect the needs of patients and improve patient quality of life. About a year ago, the IDSA posted its guideline development process for public comment.  LymeDisease.org and the Lyme Disease Association worked with patient groups across the nation and filed comments on behalf of 67 groups representing Lyme patients on April 9, 2015.  Comments from an additional 21 groups were filed on April 24, 2016.  The IDSA has finally responded roughly a year later.  How did patients do?

We objected to the lack of representation of patients with chronic Lyme disease and the physicians who specialize in treating them. We also raised the issue of biases and conflicts of interest among those on the panel. (I will address these in a separate blog.)  The only change to the IDSA panel has been the addition of three people “treated for Lyme” and one parent of a child “treated for Lyme disease.” Is this a victory for chronic Lyme patients? Or merely another exercise in tokenism? You might recall that the original panel included a “patient”—who on further inspection turned out to be someone who had never had Lyme, did not know anyone with Lyme, and lived in a state where Lyme disease is virtually unheard of. (Nebraska has 10 cases a year.)

The Institute of Medicine, which has weighed in heavily on this issue of patient representation, tells us guideline panel membership is a main determinant of the trustworthiness of guidelines. More specifically, they say that “[t]o be trustworthy, clinical practice guidelines should [include] . . . representatives from key affected groups [and] consider important patient subgroups and patient preferences.” Note that the IOM makes it clear that important subgroups of patients—like those with chronic Lyme disease who are the most deeply affected by the IDSA guidelines—need to be represented.

In addition, the IOM notes that patient representatives can ensure process integrity by a) providing a window into the process and some assurance that guidelines were not developed “behind closed doors” to suit special interests, b) providing sensitivity to what matters most to those living with disease, c) acting as a safeguard against conflicts of interest that may skew judgment of clinical and scientific experts, and d) identifying evidence gaps and weighing in on the balance of benefits and harms from the viewpoint of the patient.

Here are the questions that matter: Do these patients have what it takes to speak for the Lyme community? Do they represent the interests of those with chronic Lyme disease or were they hand-picked by the IDSA to carry IDSA water? Are they the patients we see in the IDSA promo spots—the ones who immediately had a bull’s-eye rash and then fully recovered after a brief course of antibiotics? Or are they chronic Lyme patients, who remained ill despite treatment? Are they informed advocates? Do they have the skill set necessary to effectively represent those with chronic Lyme disease? Is there a “patient/consumer organization representative” as required by the IOM? Anything less is tokenism.

We don’t know the answer to any of these questions, because the IDSA does not tell us how these patients were selected, by whom they were selected, what the selection criteria were, or even who they are.  Why won’t the IDSA release the names of patients on the panel? How can we assess whether these are good representative of our community, if we aren’t even told the names?

When asked, spokesperson for the IDSA Diana Olson said the IDSA would not release the patient names “out of respect for their privacy and security” But these are not patients visiting a doctor’s office who are entitled to confidentiality under HIPAA.  These are patients who have elected to sit on a public panel as Lyme patients—representing the interests of Lyme patients, including those with chronic Lyme. Beyond this, the notion that patients who represent patients in the community need security from those whom they represent is absurd.

Last year, the IDSA did release the name of the first “patient representative,” which allowed us to determine that the patient was “not a Lyme patient” and could not represent community interests. LymeDisease.org and many other patient groups made a point of not using her name and also requested that Lyme patients not contact her.  Of course, usually constituents are encouraged to contact their representatives. The reason we suggested that people not contact her was because she was not a representative.

A basic tenet of representation is accountability.  How can the nameless be held accountable? More importantly, how can the IDSA be held accountable for ensuring that its panel adequately represents the interests of those with chronic Lyme? If the IDSA is saying “Hey, trust us—we’ll make sure we pick a good representative for you,” that is unlikely. The IDSA has a track record of picking people who cannot possibly represent the interests of the Lyme community.  Is there something about representation that the IDSA does not understand?  Representatives of those with chronic Lyme disease should know about the disease, be known in the community and be trusted to represent our interests.

But then maybe that’s the point.  Transparency is about accountability—something that is not apparently even on the agenda.

This blog is one in a series about the IDSA revision process.  My previous post focuses on  timeframe for the process—two to five years.

The LYME POLICY WONK blog is written by Lorraine Johnson, JD, MBA, who is the Chief Executive Officer of LymeDisease.org. You can contact her at lbjohnson@lymedisease.org. On Twitter, follow her @lymepolicywonk.  If you have not signed up for our patient centered big data project, MyLymeData, please register now.