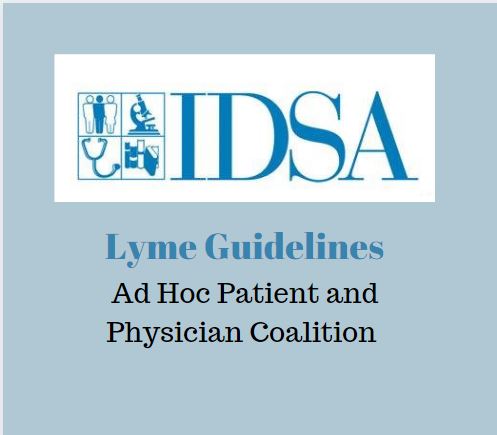 The Lyme community has many objections to the latest Lyme treatment guidelines proposed by the Infectious Diseases Society of America (IDSA).

The following is an excerpt from a 58-page rebuttal filed by the Ad Hoc Patient and Physician Coalition. Spearheaded by LymeDisease.org and ILADS, the coalition includes 50 Lyme patient advocacy organizations from the US, Canada and France. (Update: 77 groups, from eight countries, including Australia, UK, Germany, the Netherlands, and Belgium.)

The following section refers to the makeup of the guidelines panel itself. Yellow highlights have been added here for emphasis (not in original filing.)

The NAM [National Academy of Medicine] states that “[t]o be trustworthy, clinical practice guidelines should: (a) be developed by a knowledgeable, multidisciplinary panel of experts and representatives from key affected groups; (b) consider important patient subgroups and patient preferences, as appropriate; and (c) be based on an explicit and transparent process that minimizes distortions, biases, and conflicts of interest.” (IOM Report Brief 2011)

Who is at the table?

The NAM explains that the ability of the guidelines development group to perform seemingly technical assessments, “depends on the composition of the group (whether the right participants have been brought to the table) and group processes (whether the process allows all participants to be involved in a constructive way).” (IOM 2011)

As the NAM notes, “the aim is to ensure that group processes fundamentally encourage inclusion of all opinions and grant adequate hearing to all arguments.” (IOM 2011) NAM Standard 3.1 provides that the guideline development panel should include populations expected to be affected by the guidelines. However, this panel has excluded those most deeply affected by these guidelines patients and their treating clinicians.

It is unacceptable that this panel does not have any meaningful representation of the interests of patients with persistent Lyme disease given that these patients will suffer the consequences of under-diagnosis, under-treatment, and failure to retreat under these guidelines.

Moreover, there are well established non-profits who are trusted by the community to represent their interests who should have been on this panel. Patients who are not known and recognized by the affected community as being capable of representing the community’s interests are simply tokens.

The use of a consumer representative (presumably Jane Rips) is inappropriate in a disease where a patient community exists. What group of consumers does she purport to represent? It is analogous to selecting someone who has previously had a cold or the flu to sit on an HIV/AIDS panel.

No doctors who treat chronic Lyme

The NAM notes that in evidence-based medicine “clinical expertise and patient preferences remain vital to clinical decision making.” (IOM 2011) Yet, this panel does not include physicians who treat chronic Lyme disease – another population that will be deeply affected by these guidelines.

Clinicians who do not comply with the guidelines are targeted by medical boards. Insurance companies do not cover the treatments they order. Members of the IDSA testify against them. (Johnson 2009) Essentially, this allows the IDSA to develop the rules and standard of care and use them as a sword against their competitors who are not permitted in the room.

According to the NAM, the aim of including a broad spectrum of opinions and viewpoints of those affected is to ensure that “group processes fundamentally encourage inclusion of all opinions and grant adequate hearing to all arguments.”

This panel, however, consists of two groups of people: those who have strongly held polemic viewpoints and biases against the diagnosis and treatment of patients with Lyme disease, the remainder have no apparent knowledge of Lyme disease. Patients and their treating physicians were deliberately excluded from the process.

The NAM also warns against dysfunctional group processes, which include “minority influence (a single member or minority of group members sway the majority, often by capitalizing on small divisions in the group), group polarization (group dynamic leads to more extreme decisions than members would make individually), and ‘groupthink’ (members’ desire for unanimity trumps objective appraisal of the evidence).”

They caution that multidisciplinary groups are particularly at risk because members vary in “professional status, in the nature or depth of their specialist knowledge, and in their appreciation of roles and modus operandi of professional colleagues.” (IOM 2011)

Key panel members (Lantos, Auwaerter, Halperin, Sood, Steere, Wormser, Strle, Aguero-Rosenfeld, Bockenstedt, Krause, and Zemel) routinely publish with each other and sit on grant peer review study groups together. They support each other’s careers, which are predicated on the view that Lyme disease is “hard to catch and easy to diagnose and cure”.

Many in this group hold laboratory interests in Lyme diagnostic tests. These COIs [conflicts of interest] are both commercial and intellectual. This dynamic of having few in the know that have strong commercial and intellectual conflicts of interests “flock together” while the remainder of the group, who are largely not informed of the serious issues at stake play “follow the leader” permitted the guidelines to be dominated by the type of “groupthink” and minority influence that the NAM specifically warns guidelines panels to avoid.

See the groups who have co-signed these comments (updated): 77 groups, 8 countries

If your Lyme advocacy/support group would like to be listed as an endorser of our comments, please send an email to dleland@lymedisease.org, with contact information for your group.