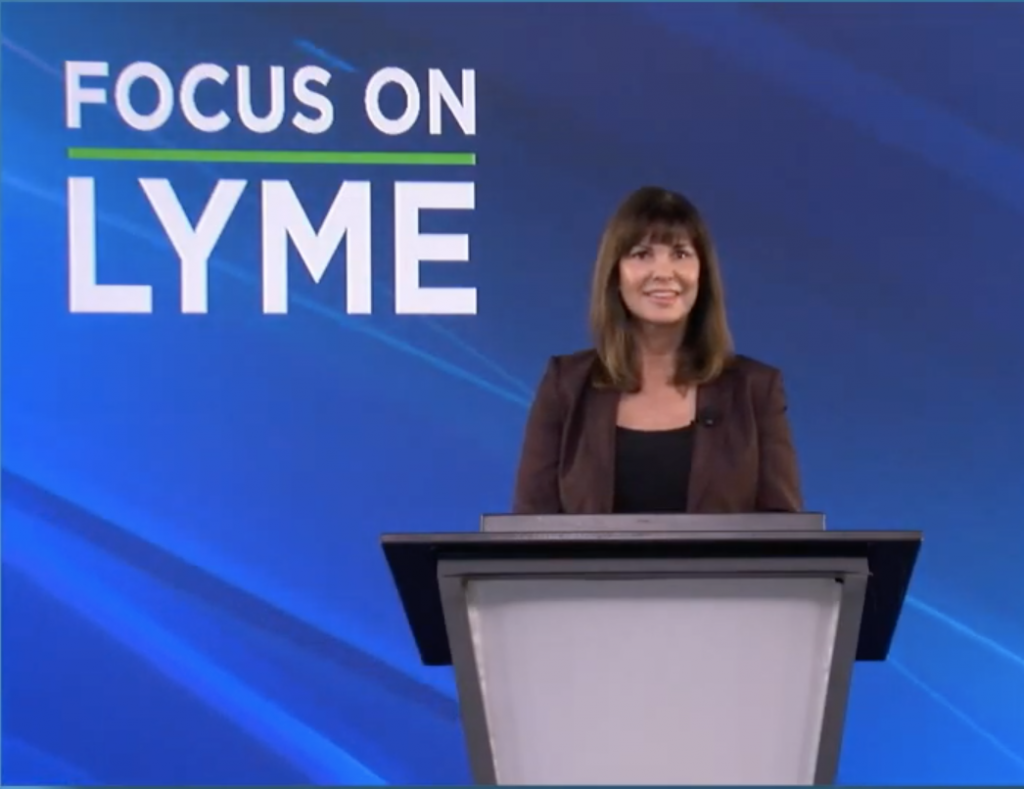 In 2020 fashion, the Focus On Lyme Scientific Conference went virtual this year, with featured speakers sharing their latest research in diagnostics and treatment. I really appreciated the depth of science that was presented, and how this year’s speakers were interconnected through their collaborative research.

Tammy Crawford, the founder of Focus On Lyme, and I share a common story. We both have daughters who contracted Lyme and co-infections in 2012. Our girls followed a similar painful path fraught with misdiagnosis after misdiagnosis, eventually landing with a doctor who believed in and brought healing to our homes. Like Tammy, I was willing to do anything to give my daughter her life back.

Professor Holly Ahern, the scientific adviser for Focus On Lyme and moderator of the conference shares a similar family story. Her daughter contracted Lyme  in 2002. As a professor of microbiology, member of state and federal tick-borne disease task forces, and a mother of a child with Lyme, Holly brings a deep level of knowledge and passion.

To start things off, the Cohen Foundation’s Bennett Nemser spoke about the new $25 million-dollar “LymeX” prize challenge. LymeX is aimed at bringing next-generation diagnostics and innovative treatment solutions to patients with Lyme and tick-borne diseases. This collaboration between the Department of Health and Human Services (HHS) and the Cohan Foundation is the largest Lyme disease public-private partnership in history.

I got the feeling all of the researchers at this conference will be serious contenders for a LymeX prize.

Embers is working to develop a new diagnostic tool based off the body’s immune response to specific Borrelia molecules (antigens) beyond the standard tests. Specifically, her research indicates that the antigens OspA, OspC, DbpA and OppA-2 may offer distinct benefits when combined with the C6 peptide into a multi-antigen diagnostic test.

Importantly, Embers is collaborating with researchers at Duke, North Carolina State and Johns Hopkins University to develop novel treatments. She noted that doxycycline, the first-line treatment for Lyme disease, only works on active (dividing cells) Borrelia. However, when Borrelia change form and/or go dormant, they are not susceptible to the antibiotics.

One of the proposed treatments, which couples monoclonal antibodies and doxycycline, is already being tested in her lab. Embers said the team brought together by the late Dr. Neil Spector will soon publish more evidence from their collaborative research.

Professor Mark Soloski, of Johns Hopkins University, presented about research being done at the JHU Lyme Disease Research Center. The research center has been conducting a years-long “Study of Lyme disease Immunology and Clinical Events (SLICE)” on a set of clearly defined patients diagnosed with early Lyme and treated with a standard course of antibiotics.

In the SLICE study, the group of patients who are left with chronic (six months or more) symptoms of Lyme after completing standard treatment are classified as post-treatment Lyme disease syndrome (PTLDS) for research purposes.

As professor Soloski explained, “human genetics are complicated.” The genes we inherit from our parents dictate how we respond to infection. The pathogen itself and our lived experiences also affect the disease process. The SLICE study looks at how the immune system (mostly T-cells) responds to Lyme disease. Over time, the SLICE study has compiled a comprehensive serum profile of two types of Lyme patients—those who get better and those who do not.

In addition, the JHU researchers have found a signaling protein (chemokine), specifically the T-cell chemokine known as CCL19, to remain elevated in the group of patients who do not improve following standard treatment for Lyme disease. In the 70-90% of patients who do return to normal function after treatment, the CCL19 levels began returning to normal at 3-4 weeks post-treatment. In the PTLDS patients, the CCL19 remains elevated at one year post-treatment.

Professor Soloski said the abnormal immune pattern they have seen in patients appears to be predictive of PTLDS, “like a fingerprint.” The researchers speculate that the elevated CCL19 levels are a result of an ongoing immune-driven reaction.

The SLICE study is designed to examine risk factors and immunologic biomarkers for Lyme disease. In addition, they have noted key genes associated with PTLDS that are being upregulated. Soloski is also interested in looking at how microglial cells and dendritic cells impact the disease process.

Professor Tim Haystead, from Duke University, was brought into Lyme research five years ago by the late Dr. Neil Spector. Haystead said he has an added interest after his wife had Lyme while pregnant with their now-healthy 17-year-old daughter.

One of Spector’s many legacies is the formation of a targeted treatment for HER2 breast cancer. As Haystead explained, the “Hsp90” protein is found in all mammalian cells. The bacterial equivalent of Hsp90, called “HtpG” protein, is found in most bacteria.

One of Dr. Spector’s discoveries was that HER2 cancer monopolizes Hsp90 protein in a way that enables our genes to proliferate and form the basis of cancer. More recently, Spector and his team discovered that Borrelia uses the HtpG proteins in a similar manner.

Haystead described the concept of molecular targeted therapies for cancer. Targeted therapy attaches to specific proteins within the cancer cells and kills them.  It is different than chemotherapy which attacks all fast-growing cells, including cancer and healthy cells.

The thing that Haystead says he is best at is finding the molecular weak point in pathogens. In the laboratory he has identified several weak points in Borrelia that appear to be good targets for therapy.  In essence, Haystead is working to use HtpG protein inhibitors to kill Borrelia burgdorferi in the same method they were able to target Hsp90 in HER2 breast cancer.

As I described in a previous article Spector and Haystead’s team has identified two potential types of  treatment for Lyme disease. One method will use drugs to selectively target the Borrelia protein (HtpG), while avoiding normal human tissue and other healthy bacteria. The other method will use a fluorescent biomarker, which is activated by light, that can be used as a direct diagnostic tool and to selectively deliver targeted drugs.

Haystead ended his presentation saying, “I am happy to report that Neil’s work is going to continue.” He says they have identified three different targeted therapies and plan to start testing them in January 2021.

Neal Woodbury, Ph.D. from Arizona State University is another stellar researcher brining decades of experience in microbiology and cancer. His presentation focused on two themes 1) finding a better diagnostic, and 2) characterizing patients with what he calls “persistent symptom Lyme disease” or “PSLD.”

The antibody profiling assay they are working on is similar to an ELISA that detects the immune system’s response to infection. But it goes several steps further. Woodbury’s team has mapped multiple Borrelia burgdorferi proteins and classified them by their efficacy in predicting Lyme disease.

A surprising result of their initial blinded cohort revealed a strong gender bias in testing accuracy. They found that the antibody tests’ overall sensitivity for acute Lyme was about 80% (range 70-90%). But there was a strong difference in specificity by gender: 80% for males and only 20% for females. Woodbury says this suggests a gender-specific immune response in Lyme disease.

Woodbury’s research into patients with persistent symptoms (lasting six months or more) is using biobank samples from 200 CDC negative controls; 33 CDC-positive Lyme patients; 54 patients with symptoms that meet the Horowitz Medical Questionnaire for Lyme, but are CDC-negative; and 55 with a positive ELISA or Western blot.

Importantly, the PSLD patient samples indicate that molecules within the nervous system “neuronal pathway” are being targeted by the immune system. Woodbury suggests this could explain the “high rate of neurological symptoms in PSLD (fatigue, pain, ‘brain fog,’ sleep disorders, and others.)”

Woodbury and his team are moving quickly with their research. He says they plan to have biomarkers available in the next couple of weeks, then go to the FDA for approval.

Following the conference, I had the opportunity to speak with Tammy Crawford. We spoke at length about our shared journeys and our mutual excitement about the progress that is being made by these researchers. It never ceases to amaze me how much parents of children with chronic illnesses are capable of learning. You frequently see this, not just with Lyme, but also with diabetes, cancer and other rare diseases.

Tammy told me, “I’m hopeful the research will translate to an early diagnostic tool, because as we all know, early treatment is key to successful recovery. We had hoped to have something by the conference but there were delays due to COVID. We do expect to have something to present within the next few weeks.”

Tammy and I both are encouraged to see researchers from outside the Lyme world bringing fresh, new insight to the field. We both hope the collaborative efforts between these research teams will lead, not just to a test capable of detecting chronic Lyme, but also more effective treatments.

You can watch the entire Focus On Lyme Scientific Conference for free here.