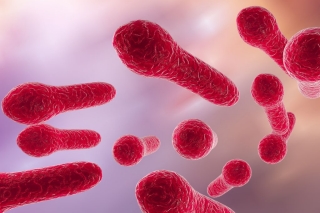 Stanford University School of Medicine scientists successfully defeated a dangerous intestinal pathogen, Clostridium difficile, with a drug targeting its toxins rather than its life.

By not aiming to kill the pathogen with antibiotics, scientists were able to avoid wiping out sizable numbers of beneficial gut microbes. And while their study was performed in mice, the drug used has already been tested in clinical trials to treat other, unrelated conditions. So the researchers believe it could be moved rapidly into human trials for the treatment of C. difficile, as well.

The findings, published online Sept. 23 in Science Translational Medicine, constitute the first-ever demonstration of a small molecule’s ability to disarm C. difficile without incurring the collateral damage caused by antibiotics.

C. difficile is responsible for more than 250,000 hospitalizations and 15,000 deaths per year in the United States, costing the country more than $4 billion in health-care expenses, said the study’s senior author, Matthew Bogyo, PhD, professor of pathology and of microbiology and immunology. Lead authorship of the study is shared by Kristina Bender, PhD, a former postdoctoral scholar in Bogyo’s lab, and Megan Garland, a student in the Medical Scientist Training Program.

“Unlike antibiotics — which are both the front-line treatment for C. difficile infection and, paradoxically, possibly its chief cause — the drug didn’t kill the bacteria,” Bogyo said. Instead, it disabled a toxin C. difficile produces, preventing intestinal damage and inflammation and allowing the gut to be repopulated by healthy bacteria that had been decimated by earlier rounds of antibiotic treatment, as well as by C. difficile-induced intestinal changes.

About one in 20 people, and possibly many more, harbor C. difficile in their gut, said study co-author Justin Sonnenburg, PhD, professor of microbiology and immunology, who has conducted pioneering research on the trillions of microbes constituting our intestinal ecosystems. Usually, the pathogen causes no harm, he said. But in those with immune systems weakened by age, chemotherapy or antibiotics that wipe out their “lawn” of beneficial intestinal microbes, C. difficile can get a foothold and cause changes that damage the gut. Plus, the pathogen can dehydrate and condense into shrunken, long-lived spores, making it difficult to get rid of. Most C. difficile infections originate in settings such as hospitals, clinics and assisted-living facilities.

Clostridium difficile is responsible for more than 250,000 hospitalizations and 15,000 U.S. deaths each year.
Kateryna Kon/Shutterstock

Making matters worse, in a quarter of patients who get it, the infection recurs despite antibiotic treatment. When it does, antibiotics succeed in eliminating it only 25 percent of the time. About 7 percent of infected people die within 30 days of diagnosis.

Treatments for C. difficile infection include fecal transplants, which are often effective. But this treatment’s long-term safety is difficult to ascertain, as a stool sample from any given donor contains its own mix of intestinal microbes, and some could have adverse effects on a recipient’s health. “We don’t have the tools to be able to screen for everything in a donor’s stool,” said Sonnenburg, noting that gut bacteria have been implicated in obesity, as well as in neurological changes.

Bogyo’s group has extensive expertise in studying the activity of proteases, proteins capable of slicing up other proteins. A few years ago, co-author Aimee Shen, PhD, a postdoctoral scholar in Bogyo’s lab who is now an assistant professor at the University of Vermont, found that C. difficile’s main toxins — secreted proteins known as Toxin A and Toxin B — contain nearly identical sections with protease activity. Moreover, she found, once the toxins are taken up by cells lining the mammalian gut, these sections become activated, setting in motion a chain of intracellular events that causes intestinal inflammation and tissue damage. This is a positive development for C. difficile, which thrives in the new environment it has created. But it’s another story for myriad other bacterial species residing in the intestine — and disastrous for the infected individual’s health, with symptoms ranging from severe diarrhea to intestinal lesions to death.

Bogyo’s team has developed ways of conducting high-throughput screens of small molecules to speedily test their ability to inhibit or enhance the activity of proteases. They put this technique to work in search of small molecules that specifically blocked the C. difficile toxins’ protease activity.

“We figured that a molecule that interfered with the pathogen’s virulence could prevent inflammation and the disruption of colon tissue without making the intestinal environment inhospitable to normal, beneficial bacteria the way antibiotics do,” said Bogyo. That would lay the groundwork for the “good guys” to make a comeback.

In the first of a series of experiments, the investigators separately incubated each of 120,000 different small molecules with the protease-containing piece of C. difficile’s primary toxin, Toxin B. Then, they added a toxin-activating factor and, using a test they’d devised in which protease activity was signaled by fluorescence, looked for drugs that shut down that activity. They identified hundreds of such substances, including a number of compounds with known biological activity.

Bogyo and his associates focused on a compound called ebselen because, in addition to having a strong inhibitory effect, ebselen also has been tested in clinical trials for chemotherapy-related hearing loss and for stroke. Preclinical testing provided evidence that ebselen is safe and tolerable, and it has shown no significant adverse effects in ensuing clinical trials.

We figured that a molecule that interfered with the pathogen’s virulence could prevent inflammation and the disruption of colon tissue without making the intestinal environment inhospitable to normal, beneficial bacteria the way antibiotics do.

Bogyo’s team conducted another test to see how ebselen affected human cells. They incubated the complete Toxin B molecule with the cells in the presence or absence of ebselen. When Toxin B was activated inside a cell, it induced internal damage that caused the cells to assume a rounded shape and die. Ebselen prevented that from happening.

Realizing they might have a potentially effective drug on their hands, Bogyo and his colleagues brought in Sonnenburg, whose lab is adept at using mouse models of C. difficile infection. The researchers incubated Toxin B in a solution either containing or lacking ebselen and injected it into mice, then monitored the animals for three days. All of the mice injected with ebselen-pretreated toxin survived, while all of the mice that received the untreated toxin were dead within 48 hours.

In a final set of studies, Bogyo and colleagues tested ebselen in a mouse model that more accurately mimics a clinical scenario in which high-risk individuals are treated prophylactically or at the first symptoms of recurrence. After rounds of multiple antibiotics, the researchers introduced a virulent, multi-drug-resistant C. difficile strain and then began oral dosing with ebselen. They observed a nearly complete block of inflammation and damage to colon tissue as the result of ebselen treatment.

The upshot of this and other experiments conducted by Bogyo’s team is that using ebselen to disable a toxin in C. difficile was enough to significantly reduce the clinical symptoms of the infection and block the persistent gut damage in mice.

This is a press release from Stanford Medicine News Center.