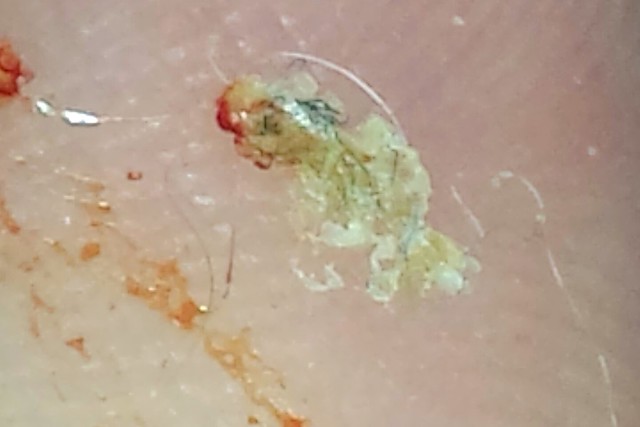 Morgellons disease is a mysterious skin condition that is associated with tick-borne infections, including Lyme disease. Patients with the condition display disfiguring lesions that contain strange multicolored filaments. The disease is often accompanied by fatigue, joint and muscle pain and neurological problems.

Mixed biofilm formation may play a role in the development of Morgellons pathology, and may also explain why the condition is so difficult to treat.

“It proves yet again that patients suffering from Morgellons pathology are not delusional.”

“Biofilms are involved in many chronic illnesses,” explains Dr. Eva Sapi, who oversaw this research project conducted in her laboratory at the University of New Haven.

“Biofilms are enclosed within a matrix protecting them from environmental threats such as the immune response and antibiotic treatment.”

The biofilm matrix is composed of carbohydrates, proteins and other substances.

“We found interesting substances in Morgellons biofilms,” states Kate Filush, a student who performed the experiments verifying the presence of biofilms.

“Morgellons biofilms contain a gel called alginate and two proteins, amyloid and Tau, that are best known for being present in the brains of Alzheimer patients. The gel provides a protective coating, and the proteins likely provide structural support for the biofilm,” explains Filush.

“Mixed bacterial biofilms are truly fascinating,” says Calgary-based microbiologist and lead author of the study, Marianne Middelveen. “The bacteria can behave in a cooperative manner, with each species providing a function that the other is lacking. A mixed infection can greatly enhance the pathology induced by biofilms.”

Mixed infections in biofilm communities provide an explanation for why Morgellons disease is so difficult to diagnose and treat.

“To treat the disease, one must first diagnose the underlying infection or infections,” says Dr. Stricker, co-author of the study and a San Francisco internist who diagnoses and treats patients with the perplexing skin disease. “The Morgellons mystery is slowly yielding its secrets, one infectious agent at a time.”