After 80% improvement in autism symptoms, he’s going to college 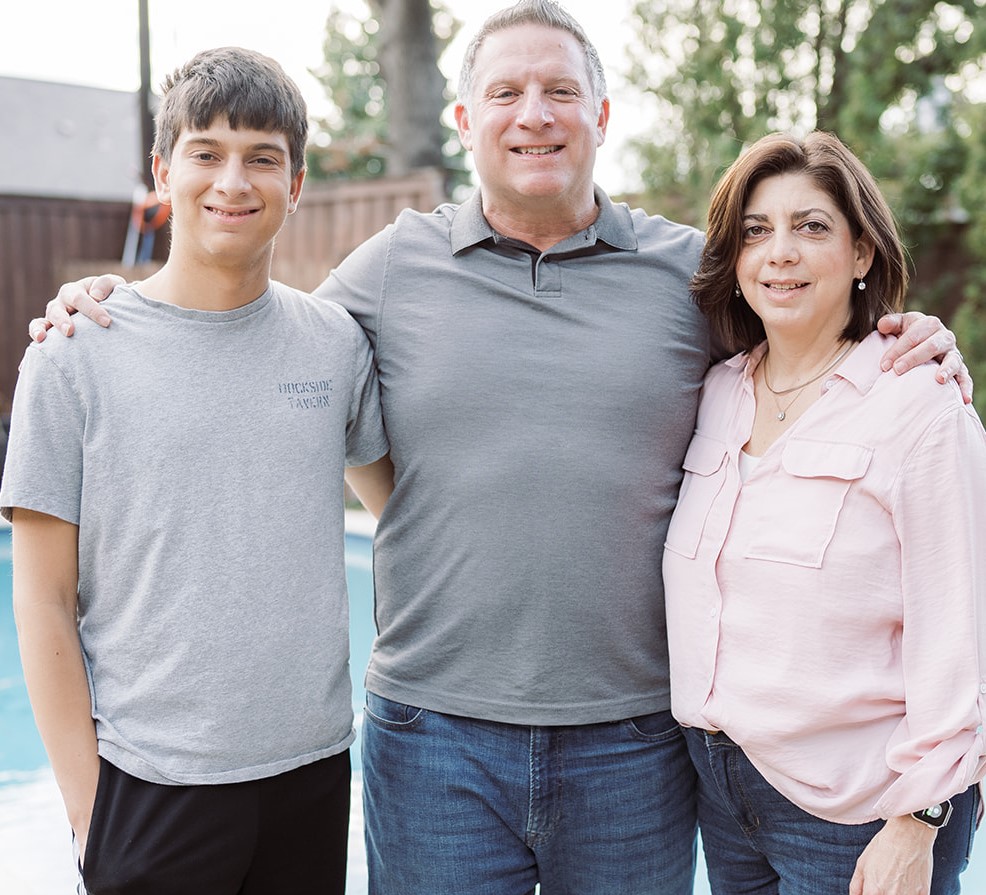 Sammy, my 18 year old, autistic son, showed an 80% improvement in autism symptoms after being diagnosed with and treated for Bartonella, Babesia, and Lyme–all included under Pediatric Acute Neuropsychiatric Syndrome or PANS.

You can find more details in my previous blog: Treating Bartonella Cleared Most of My Son’s Symptoms of Autism.

An amazing event happened during the holidays last month. Sammy was accepted to a four-year university! This would have been unthinkable two years ago when we expected him to go directly on disability after high school.

My husband and I are incredibly grateful to our doctors, this community, and proud of all the hard work Sammy put in to catch up on learning he missed throughout his schooling. I hope you’ll enjoy this short video about his college acceptance! Instagram, TikTok, YouTube (optimized for mobile).

Looking back on our journey, one of the frustrations that I experienced was how long it took to get the correct diagnosis and treatment.

The search for root causes

When a child develops psychiatric symptoms, it can be hard to find a physician who will explore underlying medical causes such as infections. Instead, doctors are more likely to prescribe a litany of psychiatric medications.

Additionally, even if you have a doctor who is familiar with infectious causes of neuropsychiatric symptoms, it can be extremely difficult to figure out which infections in particular are the source of the problem.

For example, if your child tests positive for strep antibodies, a provider might give a diagnosis of PANS, Pediatric Autoimmune Neuropsychiatric Syndrome. But strep may not be the whole story. If you dig deeper, other infections such as Bartonella and Lyme disease may be causing the immune system to malfunction.

Failing to recognize the role of Lyme and other vector-borne diseases may lead to many failed treatments, lost years of childhood, and unnecessary medical expenses.

For years, we worked with doctors who missed the true underlying cause of my son’s PANS symptoms by focusing primarily on strep and coxsackie infections, due to false negative vector-borne diseases (VBD) test results.

VBDs include Bartonella, Borrelia (Lyme disease), Babesia, Ehrlichia, Anaplasma, and tick-borne relapsing fever, among others. In addition to ticks, Bartonella can be transmitted by the scratch of a cat or other animal, as well as by lice, mites, bed bugs, fleas, and spiders (1). The combination of infections is often referred to as VBDs.

A PANS focus on the simple infections tested by common labs led to many failed treatments and an additional seven lost years for my son.

Unfortunately, many lab tests can give false negative test results for VBDs. That’s when it’s essential to have a knowledgeable practitioner who can give a clinical diagnosis — based on signs, symptoms and medical history.

It wasn’t until we received a clinical diagnosis for Bartonella, Babesia, and Lyme and found effective treatments, that we made true progress. With proper treatment for VBDs, my son’s strep and coxsackie virus titers returned to normal and appeared to cause no symptoms.

Dr. Amy Offutt, the president-elect of ILADS, said,“High antibodies to infections such as strep, EBV, HHV-6 and coxsackie virus can ebb and flow over time, depending on severity of symptoms, and can simply be a sign of immune dysregulation.”

What you should know

1. Congenital Bartonella and other vector-borne diseases can cause PANS symptoms. Bartonella, in particular, can cause many of the neuropsychiatric symptoms associated with PANS (2). For us, Bartonella was the most important, but not the only culprit of this story.

2. VBDs are often difficult to pick up on testing, even from specialty labs. According to Dr. Offutt, “The combination of patient and family history, clinical presentation, high suspicion, and lab results must all be considered in determining a clinical diagnosis.” The more children in a family who have symptoms, the more important it is to be screened for VBDs, as well as mycotoxin/mold illness.

3. Frequently, but not always, children with VBDs have chronic illness, and not necessarily an acute presentation. Often children with chronic illness display symptoms by age four. In some adolescents, in particular girls, neuropsychiatric symptoms may not develop until late teens or early twenties (3).

Children may present with chronic symptoms such as headaches, ADHD, autism, tics, learning differences, motor delays, or sensory sensitivity prior to a final insult (i.e. illness, major stressor, or other challenge to the immune system) that can cause a sudden escalation in symptoms.

In other cases, the child has no PANS symptoms prior to an insult to the immune system which brings on an acute onset of neuropsychiatric and physical symptoms. There are reports of acute PANS cases beginning after COVID (4,5) that have been determined to be caused by a latent Bartonella infection becoming active for the first time.

Similarly, it may be possible that other infections such as strep, flu, and EBV may also cause Bartonella and other VBD activation, though research is needed to better understand this. Dr. Offutt advises that “All children suffering with neuropsychiatric issues, whether acute or chronic, should be evaluated for the possibility of a chronic vector-borne disease.”

4. Frequently, children with VBDs also have high antibodies for infections associated with more traditional PANS, such as strep, mycoplasma pneumonia, EBV, HHV-6, cytomegalovirus, influenza, and coxsackie virus. Additionally, these children may also test positive for autoimmune encephalitis, high cytokines, high interleukins, and have positive Cunningham panels. (This is a blood test which measures the levels of circulating autoantibodies associated with certain neurologic and psychiatric symptoms.)

Per Dr. Offutt, “Because high antibodies may actually be a sign of immune dysregulation, treatment for Bartonella, Babesia, Borrelia, and other vector-borne infections, if present, may resolve the immune dysfunction and should be a top priority to treat.”

Note: the majority of psychiatric symptoms can be caused by Bartonella. In fact, Dr. Edward Breitschwerdt, Dr. Tania Dempsey, and Dr. Daniel Kinderlehrer all have noted in their writing and webinars that Bartonella is a cause of PANS (6,7,8,9).

B – Indicates symptoms caused by Bartonella

X – Vector-borne infections other than Bartonella

But my child wasn’t bitten by a tick or other vector?

Most people infected with VBDs do not recall a tick or insect bite. Additionally, infections can be transmitted congenitally to the child during pregnancy, often by a mother who didn’t know she was infected (10). There are a wide variety of mild to moderate symptoms of VBDs beyond chronic fatigue and pain that get little attention.

To learn more about congenital transmission and symptoms in parents, please read Do Lyme symptoms in mothers lead to ASD? for a discussion on this topic. Note: this article applies to all parents whose children have a PANS diagnosis.

What are the similarities and differences in treatment?

Treatments for strep, EBV, and other non-VBD PANS infections often involve azithromycin, augmentin, amoxicillin, or minocycline. Since these antibiotics are commonly used to treat VBDs in combination with other antibiotics, they may help a patient see some improvement in symptoms.

However, these drugs generally only treat cellular or intracellular infections. Treating VBDs require addressing all forms of the infection: cellular, intracellular, and importantly, biofilm-contained pathogens in order to see long-lasting results. Furthermore, if a child is infected with a parasitic infection such as Babesia, antimalarial drugs may be required.

Without a full understanding of what you are treating, you may experience temporary improvements, but the vector-borne infections may continue to grow and wreak havoc for the patient.

What do I do if my child isn’t improving?

I read posts on the PANDAS/PANS Facebook groups every week. Many moms are frustrated with their children’s lack of progress. They try to crowdsource advice on neuropsychiatric medications and better supplements because their children have flared or aren’t responding to treatments after years of trying. Some children are in dire straits with psychosis, severe oppositional behavior, OCD, suicidal thoughts, or aggression.

Sometimes the child has a VBD diagnosis, but the doctor missed the clinical diagnosis of Bartonella or other infections if the testing was negative. Other times, the child has the correct diagnosis including Bartonella, but is only receiving single antibiotics to treat strep and other simple infections.

In this case, the doctors are not following protocols for the targeted treatment of Bartonella and other VBDs, which may be the primary infections.

And, many other times, the child sees a traditional PANS doctor who missed the most important factors causing their patient’s neuropsychiatric symptoms.

We need all of our PANS doctors to treat VBDs

If you are a doctor who treats PANS infections without considering VBDs, as a parent who suffered through failed treatments, wasted tens of thousands of dollars, and lost years of my son’s life, I recommend two options.

1. Get trained on the full range of infections associated with VBDs, or

2. Be willing to refer PANS patients to providers who know how to screen for and treat VBDs.

We need more doctors who know how to properly diagnose and treat this complex condition!

It’s time to put the focus on Bartonella and VBDs


So many families struggle to make sense of the tests and do their best to follow the complicated treatments. To build consistency in how the disease is diagnosed and treated, doctors should provide a specific, clear, and accurate diagnosis of the primary infections.

A VBD diagnosis should not be muddled with umbrella terms like PANS. It’s time to abandon the term PANS for describing VBD and get serious about the Bartonella, Babesia, Lyme, and related infections that are stealing our children’s lives.

If your child needs an evaluation for VBD, you can find a Lyme specialist on LymeDisease.org or in your state’s Lyme Facebook groups.

If you are a doctor who wants to become a Lyme specialist or to stay abreast of the latest developments in diagnostics and treatment, contact the International Lyme and Associated Disease Society (ILADS) for educational opportunities.

The author can be contacted at debbiekimberg.com. You can follow her son’s wellness journey on Instagram and TikTok at @hijackedbrains.

Disclaimer: The author is not a doctor. This article is the opinion of the author and is not intended to dispense medical advice. Please seek a doctor’s advice for diagnosis and treatment.