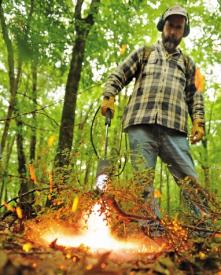 From The Day (New London, CT)

Lyme – Friday morning, off a shady wet trail in the town that gave Lyme disease its name, a man with a 30-pound propane tank and a flame-throwing wand showed a group from local land trusts how a bit of fire in the right spots can make their woodlands healthier for both native wildlife and humans.


“You want to heat it until the stem glows. Then it’s dead,” said Jeffrey Ward, chief scientist at the Connecticut Agricultural Experiment Station’s Department of Forestry and Agriculture. He talked over the loud gush of the propane torch as he wielded it on a patch of thorny green branches springing from the forest floor in the Eno Preserve, owned by the Lyme Land Conservation Trust.


Ward’s demonstration, for representatives of Lyme, Salem and East Haddam land trusts and the Nature Conservancy, is the outreach part of five years of research he and fellow experiment station scientist Scott Williams have been doing on the relationship between Japanese barberry, ticks that carry Lyme disease and deer overpopulation.


At 28 study areas, including a parcel along Lord’s Cove in Old Lyme, the two have been studying various aspects of the triangular relationship between ticks, deer and barberry, and spreading their message to land conservation organizations about the best methods for ridding forests of barberry. Deer serve as hosts for adult ticks, while the barberry functions as a nursery for ticks in their juvenile stages.