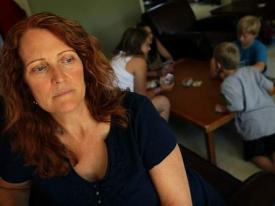 The Santa Rosa Press Democrat takes an in-depth look at tick-borne disease in their county. One woman, whose misdiagnosed Lyme kept her intermittently bedridden for 15 years and caused cognitive problems, recounts, “I got lost in my own laundry room. I found my phone in the refrigerator. I don't feel safe driving my kids to school, so I'm paying someone to take care of my kids.” That was a big change for a woman who used to dance in Zumba classes five times a week. At one point, Stoesser was prescribed five different anti-depressant drugs in the course of a couple of months.

By CATHY BUSSEWITZ
THE PRESS DEMOCRAT

Her symptoms started with a high fever and flu-like symptoms. Then came creeping numbness, tingling and constant headaches.

For more than a decade, doctors told Cindy Stoesser, 50, of Santa Rosa that she had multiple sclerosis, but she thought they were wrong.

Then one morning Stoesser was in her yard while her children were inside the house and she felt the left side of her chin go numb. She soon lost feeling in her throat, and then the entire left side of her body.

“I was in tears, I’m scared to death about what’s happening, and I’m trying to find someone to help me,” Stoesser said.

A few months after that episode, and after more than 15 years of dealing with symptoms that left her intermittently bedridden and unable to care for her children, Stoesser was diagnosed with Lyme disease. It is an infectious disease carried by certain kinds of ticks that are common in the dense foliage of the North Coast.

And like many Lyme patients, Stoesser experienced a long, circuitous route to a diagnosis.