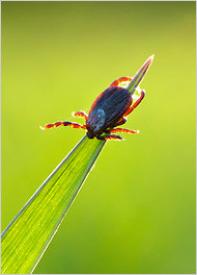 According to the New York Times, the malaria-like blood parasite is spreading throughout the Lower Hudson Valley and coastal areas of the Northeast. Reports the Times: Experts fear that many undiagnosed patients may be donating blood. Currently, blood banks do not screen for Babesia because the Food and Drug Administration has not licensed a test for this purpose. The only way to screen a patient is by using a questionnaire, which simply asks blood donors if they are infected. "

From the New York Times:

A potentially devastating infection caused by tick bites has gained a foothold in the Lower Hudson Valley and in coastal areas of the Northeast, government researchers have found.

The condition, called babesiosis, is a malaria-like illness that results from infection with Babesia microti, a parasite that lives in red blood cells and is carried by deer ticks. Though far less common than Lyme disease, babesiosis can be fatal, particularly in people with compromised immune systems.

Because there is no widely used screening test for babesiosis, its spread poses a particular threat to the blood supply, scientists said. “We are very worried about it and are doing everything in our power to address this,” said Sanjai Kumar, chief of the laboratory of emerging pathogens at the Food and Drug Administration.

According to a recent report by the Centers for Disease Control and Prevention, there were six cases of babesiosis in the Lower Hudson Valley in 2001 and 119 cases in 2008, a 20-fold increase. In areas where Lyme disease is endemic, like coastal Rhode Island, Massachusetts, Connecticut and Long Island, babesiosis also is becoming very common, said Dr. Peter Krause, senior research scientist at the Yale School of Public Health.