NEWS: From the UK's Telegraph: Why a tickbite could ruin your summer 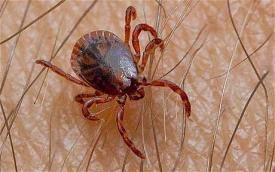 Taking a look at Lyme in the UK, the newspaper points out that Britain’s Health Protection Agency follows the Lyme guidelines set by the Infectious Diseases Society of America–and all the problems that causes for patients.

Michael Palin calls it “one of the most unpleasant illnesses to which travellers can be exposed”, a rather stoical description for a disease that can cause blindness, deafness, facial palsy and excruciating pain – and can be caught at this time of year in your own back garden.

Cases of Lyme disease have tripled in the past 10 years as more and more people take up outdoor pursuits. It comes from the bite of an infected tick and can attack the central nervous system in unpredictable ways. Although no bigger than a poppy seed, the insect inflicts a disproportionate amount of damage when it decides to leave its animal host – typically a deer – in search of human blood. A cunning operator, it abseils down from long grass and hooks on to unprotected skin, anaesthetising as it bites so that its victim has no warning sting, no reason to seek critical early treatment.

The symptoms that develop over the next few days and weeks are so complex and so easily confused with those of other conditions that they are frequently misdiagnosed. Although antibiotics are commonly prescribed when a blood test has proved positive for Lyme, according to specialists there is no good evidence about which type of antibiotic is most effective.

Stella Huyshe-Shires, 60, waited three increasingly desperate years for confirmation that she had Lyme disease. In that time, she suffered intense pain, fatigue, loss of hearing, stiffness in her joints, panic attacks and a general inability to function normally. Eventually, she had to take early retirement on grounds of ill health.

She was bitten, unawares, while working in her garden at Sidbury, east Devon, in 1999, and developed an irregular circular rash on her thigh. “It didn’t hurt and it didn’t sting, but it went on expanding,” she says. “When it started to encroach on my groin, I went to the doctor. He gave me some steroid cream. The rash faded, and I thought no more of it.”

Then she started to have other symptoms. She became hypersensitive to other people’s voices and lost 20 per cent of her hearing. Two months on, she had pains behind the knee, under her feet, between her shoulder blades and, most severely, down her spine. She woke with palpitations in the middle of the night. For the next three years, this bizarre set of symptoms alternated, receded, returned.