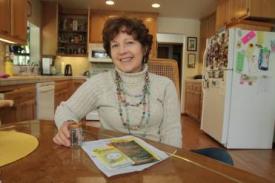 The Colfax Record takes a look at Lyme disease in the western Sierra foothills region of northern California.

Now that spring has finally arrived in the western Sierra, so have the hungry black-legged, or deer, ticks waiting to feed on unsuspecting people and animals.

“Although ticks are here year round,” said Colfax physician Dr. Kurtis Fox, “we see them mostly in the spring.”

Ticks hang on bushes, grasses, and leaf litter waiting to crawl onto a passing mammal for a meal.

These blood-sucking pests can transmit Lyme disease and other tick-borne illnesses.

According to Fox, locally one in every 50 to 100 ticks is infected with Lyme.

Costly, long-term health issues can result in humans if the disease is not diagnosed and treated early.

“Unfortunately, the symptoms of Lyme come and go and it’s difficult to confirm by blood test until six weeks after a person has been infected,” said Fox. “Some people may be bitten by a poppy-seed-sized nymph and never know it or see the early signs of infection.”

Lyme disease is called the “Great Imitator” because it can look like other diseases and is easily misdiagnosed, according to the California Lyme Disease Association.

This was the case for Chris Ryland of Meadow Vista.

“After a 1997 backbacking trip into the Tahoe National Forest with my husband, David,” Ryland said, “I noticed a ‘funky’ rash that quickly disappeared.”

The Rylands wore shorts on the trip and stopped to photograph wildflowers in the open meadows along the trail.

Neither thought to check themselves for ticks or to wear protective repellents such as DEET and permethrin.

Ryland said she suffered from a wide range of health issues for years after the fateful backpacking trip.