NEWS: Dogs infected with tick diseases should be a warning to humans 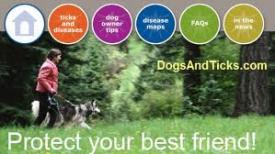 PORTLAND, Maine, May 17, 2011 /PRNewswire/ — Spring is here as is tick season, which begins in April and lasts through November. As people and the country’s 75 million dogs enjoy warmer temperatures, the dangers of tick-borne diseases threaten — from the deep woods to urban parks.

According to experts and a leading Web authority on the subject, DogsAndTicks.com, regular screenings by a veterinarian and preventive medications are the best ways to protect pets and families from disease-carrying ticks.

The tie between canine and human exposure is closely related. A 2011 Institute of Medicine of the National Academies report describes it this way: “Animals, especially dogs, because of their close proximity to humans and the fact that they often present with similar signs of tick-borne disease, are often sentinels for human tick-borne diseases” (Elchos and Goddard, 2003).

Infected dogs are warning signs for their owners. Once pet owners and veterinarians know that a tick-borne disease exists in a specific area, they can take preventive steps to reduce the risk to nearby families and dogs. This knowledge is especially helpful, “because recognizing tick-borne illness in people is difficult” (Institute of Medicine).

The same is true for dogs. Signs of tick-borne diseases in dogs are often subtle or even imperceptible until it’s too late for effective treatment, and pets across the country are at risk.

“Ticks in every U.S. state carry diseases,” said William L. Nicholson, Ph.D., Division of Vector-Borne Diseases at the National Center for Emerging and Zoonotic Infectious Diseases at the CDC.

So, pet owners everywhere—in both rural and urban areas—should have their dogs screened annually by a veterinarian for signs of tick-transmitted diseases. Lyme is the most widely known and common tick disease, but there are many others that ticks carry and can transmit to dogs and people. These include Rocky Mountain spotted fever, anaplasmosis (sometimes known as “dog fever”), ehrlichiosis and some emerging diseases that can have devastating effects.

“There have been recent dramatic increases in tick-borne illnesses, including Lyme, babesiosis and Rocky Mountain spotted fever,” said Nicholson.

Though rare, some tick-borne diseases can be fatal in both pets and people. More often, though, they can cause bleeding disorders, central nervous system dysfunction and kidney failure in dogs, and flu-like symptoms, including fatigue and headache, or even the loss of limbs in humans. And, according to the CDC, laboratory results for tick-borne illness in people are often negative on the first sample and require a second test two to three weeks later to confirm inspection. Further, children are more susceptible to infections due to their immature immune systems.

People who want to learn more about how to protect their families and pets should consult their veterinarians and DogsAndTicks.com, a helpful website with information about tick diseases and tick-bite prevention. Since early diagnosis and treatment are keys to longer and higher-quality lives for dogs, DogsAndTicks.com also teaches people how to recognize difficult-to-distinguish signs of infection and remove embedded ticks.

The veterinarians and veterinary parasitologists who support and develop content for DogsAndTicks.com are committed to educating pet owners about the prevalence and risks of tick-borne diseases. The website does not endorse any individual product but serves as an informational source, with tools that include interactive prevalence maps for tick-borne diseases based on diagnostic screenings from across the country.

IDEXX Laboratories, Inc. is a global market leader in pet healthcare innovation, helping practicing veterinarians around the world advance medical care with a broad range of diagnostic products and services. IDEXX created DogsAndTicks.com as a resource for pet owners.