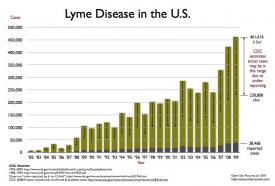 The UNDER OUR SKIN blog has created a useful graph showing that "official" cases of Lyme in the US have increased 94% over the last 5 years. The article also explain why there is such a large gap between reported and actual cases of Lyme, and how the reporting criteria for the disease changed in 2008.

From the UNDER OUR SKIN blog:

Since UNDER OUR SKIN has been released, Lyme disease cases have continued to rise, with the U.S. Centers for Disease Control (CDC) posting a final tally of 38,468 reported cases in 2009 [1], an 9% increase over the previous year. Over the past five years, Lyme cases increased by 94%, almost doubling from 2004 to 2009.

According to CDC epidemiologists, these reported cases are underestimated 6- to 12-fold in endemic regions due to inherent flaws in its passive reporting system. [2] Consequently, the actual number of new Lyme cases in 2009 could be as high as 461,616.