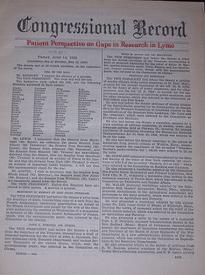 On September 29th, Congressman Christopher Smith (NJ) introduced into the Congressional Record a report exposing the gaps in research in Lyme disease. The report was originally commissioned by the Institute of Medicine (IOM) from the California Lyme Disease Association, the national Lyme Disease Association, and Time for Lyme. However, the three groups pulled out of the IOM process because of a lack of transparency and the high degree of bias in the process, which undermined its integrity and could harm patients. The Congressional Record represents an opportunity to communicate key research gaps in Lyme disease in a credible venue. The report is available on line. The press release about the Research Gaps Report and the link to the Congressional Record of the report, follow. . .

For the full Report on the Gaps in Science in Lyme disease go to: go to: THOMAS – Congressional Record – 111th Congress.

October 5, 2010 – In an effort to raise awareness about the difficulties facing patients with Lyme disease, on September 29,2010, Congressman Christopher Smith (NJ) introduced into the Congressional Record a report that exposes the research gaps in Lyme disease.  The report was submitted by three of the nation’s most influential Lyme disease organizations, the NJ based national Lyme Disease Association (LDA), the California Lyme Disease Association (CALDA), and Connecticut-based Time for Lyme (TFL). The report was originally commissioned by the Institute of Medicine (IOM) study group as part of a scientific workshop which was initiated through Congressional Appropriations language. The three groups objected to the IOM process which permits bias on the workshop committee and lack of transparency, and they asked the help of Smith to allow their concerns to be heard in a credible venue.

The report presents the patient viewpoint on gaps in the science of Lyme disease, and includes areas of biomarkers, proteomics, pathophysiology, patient oriented research, treatment options, strain variation, persistence and testing. Antiquated Lyme disease testing is the central issue which fuels the Lyme controversy. Unlike HIV, which had a gold standard test in less than 10 years, Lyme disease does not have one 35 years into the disease.  Less than 50% of patients test positive with conventional antibody tests. Treating physicians have argued against over-reliance on testing for diagnosis and treatment, relying instead on clinical judgment with testing as an adjunct.

Lyme advocacy groups saw a need to assess the state-of-the-science and advocated for a conference by the National Institutes of Health (NIH). NIH requires transparency and inclusion of all stakeholders and permits the exploration of broadly diverse scientific viewpoints. NIH policies also guard against bias on the planning committee.

Instead of using its own process, NIH contracted the workshop out to IOM. The IOM’s mission was to provide “independent, objective and non-partisan” advice to policy makers, yet the majority of the participants sitting on its Lyme disease panel belong to the Infectious Diseases Society of America (IDSA), a medical society with a known bias.  The hearing panel ignored the Lyme advocacy groups’ frequent requests for transparency and a balance of scientific viewpoints, as delineated in Congressional Appropriations language. The groups felt they had no choice but to protest the process integrity and withdrew their support of and participation in the program.

The Lyme advocacy groups expressed their belief that this amount of bias would undermine the integrity of the scientific workshop and that its final report would reflect this lack of objectivity.  Rather than participate in a process that the groups believe may harm patients, the groups had their report entered into the Congressional Record to ensure that its contents would be shared widely both with Congress and the public. See Congressional Record No.133 Book II Vol. 156 No. 133 E 1872 or go to: THOMAS – Congressional Record – 111th Congress

After the withdrawal of our advocacy groups, the IOM appears to have responded by commencing review of its agenda.  We applaud this.  It is noteworthy that Benjamin Luft, a leading investigator on the use of high throughput technologies to decipher the myriad manifestations of Lyme disease has been added after that review.  Although this will undoubtedly bring new openness to the discussion, it is hoped that further modifications will be made to correct a flawed agenda.

Although the groups are heartened to see movement in the right direction, they remain skeptical that the process will lead to a true understanding of the patient’s needs. In a jointly prepared statement, the groups stated: “It’s one step-but we are cautious.  The IOM needs to commit to making this entire process unbiased so that the true state of the science can be explored, and we can make the type of progress on this disease necessary to develop diagnostic tools and treatments that help restore patients to health.  That is what this should be about.”